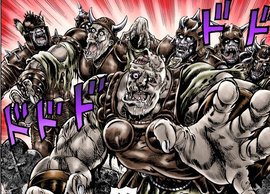 Zombies are primarily antagonists in Phantom Blood. Anything from long-buried corpses to hybridized organisms can be made into a zombie. Those who have their blood sucked out by a Vampire (and infected with a vampiric extract in the process) are turned into zombies who no longer feel pain. Skilled Ripple users are able to reject this process.

Zombies are typically lesser beings that have no special vampire abilities. Their physical strength and speed are nonetheless greatly enhanced. Some zombies seem to be able to maintain their human personalities, notwithstanding a corrupted version of it due to their undead forms. As lesser beings, the majority of zombies base their methods of attack on their lives as humans, making each unique and unpredictable. Zombies are known for having a rotting stench, a monster-like appearance and an insatiable bloodlust for human flesh. Most of them, however, hide their true appearance through disguises (like Adams and Doobie).

The Needle Vein Strike (血管針攻撃, Kekkan Shin Kōgeki) is used by four of Dio's zombies: Page, Jones, Plant, and Bornnam. Consisting of small antennae coming out of their heads capable of sucking the blood of their victims, they use it to attack Straizo simultaneously.

Some Stands are capable of reanimating corpses or bringing someone back to life.

In Diamond is Unbreakable, Stray Cat resurrects its user, Tama the cat, into a plant after it dies. Tama keeps its personality and memories but now has the body and needs of a flower.

In Vento Aureo, although Bruno Bucciarati's life had ended, Gold Experience heals his body before his soul departed. His body continues to move only through the "life energy" that Giorno had given him.[1] In this undead state, Bucciarati lacks bodily functions such as breathing, a heartbeat, or the ability to feel pain. However, it also allowed him to be immune to the effects of Green Day, and although the decay of his body gradually makes him functionally blind and deaf, he could still converse with others through the ability to observe and feel what individual souls thought.

Sports Maxx as an invisible zombie