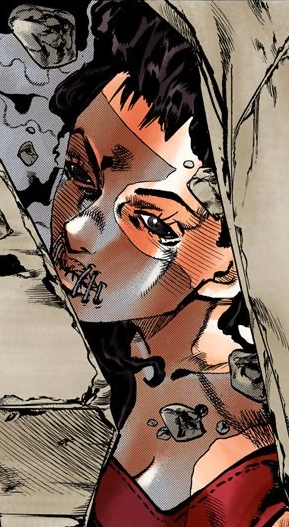 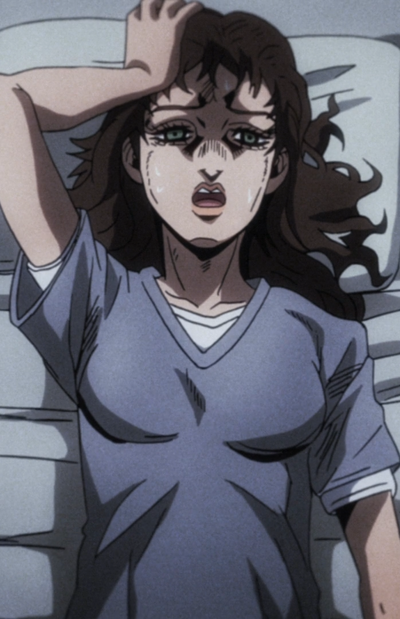 10 years to an all-female prison

GW Episode 26 (Flashback)
“
In a strange but true event, a baby boy was born in an Italian female prison in the summer of 1967. The mother was in her second year of a ten-year prison sentence for bank robbery. She insisted that the father already died of an illness. She had become pregnant over two years ago.
”
—Narrator, Chapter 569: A Little Story From the Past

She somehow gave birth to Diavolo in an all-female prison two years into her ten-year sentence, so Diavolo's birth remains a mystery. She is referred to as Prisoner 696 (受刑者696, Jukeisha Roku Kyū Roku) in the anime.[1]

While in prison, she wears a pink strapless jumpsuit which has long sleeves. In the colored manga, she has long black hair with small hazel eyes. In the anime, her eyes have a greener hue. She wears a blue-gray jumpsuit, with a collar and short sleeves.

When she is out of prison, she wears what seems to be a dress.

Not much is known about her personality, but she doesn't seem to be a moral person as she attempted to rob a bank.[2] She insists that the father of her child already died two years ago.

In 1965, she was sentenced to 10 years at an all-female prison for bank robbery and assault.

In the summer of 1967, 34 years before the events of Vento Aureo, she gave birth to a baby boy in an all-female prison on a remote island. This was two years into her 10-year prison sentence, and there were no men around the prison at all, yet she still managed to give birth. The mother insisted that she was pregnant the whole time.

The anime expands this scene. The woman can be heard suffering labor pains one night as the prison guards are bothered by her screams. As they ask her what's wrong, they realize her water broke, signifying that she's pregnant. As they prepare for delivery, one of the guards point out that the mother didn't even look pregnant earlier up until giving birth. When asked who the baby's father was, the mother says that he's been dead for over two years. One of the guards sarcastically replies that a "barnacle growing on [her] knee would be more believable than that". After delivery, the guards look at the strange baby that the woman had given birth to. The baby had his eyes open the whole time, not shedding a single tear. The baby blinked once, and one of the guards noticed that his eyes seemed to change color.

The baby couldn't be raised in the prison, so the guards had a priest of the mother's hometown, a small Sardinian village, take care of the baby.

One day, the priest was making a garage for his foster son, when he accidentally unearthed the mother. She was somehow still alive, yet her mouth had been stitched shut so that she couldn't speak, and she didn't know how long she'd been there, nor did she know how she ended up underneath the floor. The anime adds an extra scene of the priest turning to find his foster son behind him with a pickaxe.

Afterwards, a fire burned down the entire village that night. Seven were dead, and the rest were missing. On the list of the deceased were the foster father and the son; the son was named Diavolo.