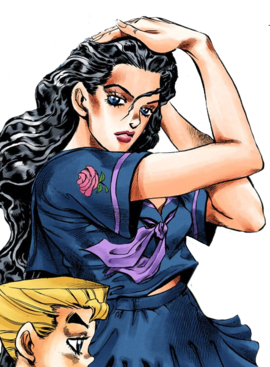 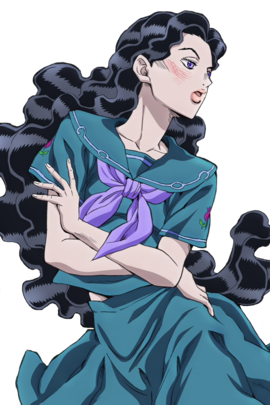 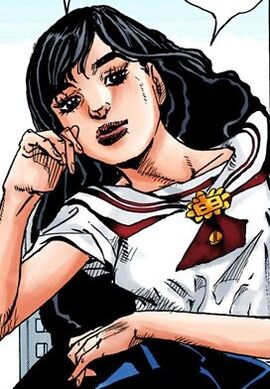 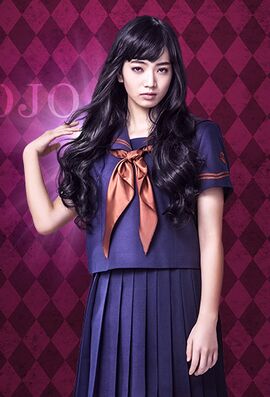 Eyes of Heaven
“
It doesn't matter if anyone comes, because love is invincible.
”
—Yukako Yamagishi, Chapter 297: Yukako Yamagishi Falls In Love, Part 4

Yukako is a high-school student besotted with Koichi Hirose. She originally tries to kidnap Koichi before being neutralized and eventually starting a mutual relationship with him.

Struck with the Arrow by Keicho Nijimura, Yukako is a Stand User who freely manipulates her hair through Love Deluxe.

Yukako is a teenage girl of fine build, 167 cm (5'5¾") tall. She is characterized as especially beautiful (noted by Aya Tsuji[2]), with fine facial features and bodily proportions. She has full, dark and wavy waist-length hair, a mole above her right breast, and dark eyes. She also has pale skin and prominent, arched eyebrows.

with a rose imprinted on its sleeves along with a pair of leather shoes and socks.

In the Yukako Yamagishi Dreams of Cinderella arc, she displays a mature taste in casual clothing. She wears a light wide hat with spots on it, a crop top with a collarless jacket, and a skirt.

Yukako is introduced in the midst of a date with Koichi Hirose,[3] initially acting demure and sweet around him. This visage quickly dissipates when she reveals her bad temper and obsession with him, which occupies the majority of her initial role in Diamond is Unbreakable.

Yukako's most recognizable character trait is her obsessive love for Koichi, which she explains as appreciation for men with potential rather than perfect people, whom she considers boring, and admits outright to becoming obsessive about anything she likes. Her love takes an overtly psychopathic turn when she decides to kidnap him and attempt to brainwash him into reciprocating her feelings, as well as forcefully training him into fitting an idealized picture of himself. Upon Koichi's revolt, she goes completely berserk and is willing to hurt, or even kill him in order to keep him for herself. Once she is defeated, and then immediately saved by Koichi in spite of what she put him through, Yukako sees the error of her ways, becoming genuinely infatuated by his heroism, and as such begins to fully respect his privacy and feelings. After beginning a true relationship with Koichi, she appears much more mellow and relaxed.

Aloof and "insanely tough" (as described by Koichi), Yukako is often cold toward people and maintains a steely, unwelcoming expression, except for in the presence of Koichi, with whom she acts sweetly and warmly in an excessive fashion. She is irritable, blunt and prone to lashing out, particularly when something gets in her way. When angered, her left eye also twitches. Yukako frequently and violently uses her Stand, Love Deluxe, against anyone she feels would hurt her chances of captivating Koichi, resorting to lethal force in the worst case.

She has also been described as the type of person who lives in her own world and tends not to listen to others, expecting things to go her way and for people to follow what she says. Even when something goes wrong, she tends to blame it on others and refuses to find fault with herself. Despite the insecure comments in her introduction, she has immense pride in her appearance and hair, even threatening to murder Koichi once he damaged her hair during their fight, and again threatening Aya after her Cinderella caused her face to fall apart.

In the anime, she has a habit of referring to herself in the third person. She also seems to have talent in cooking and sewing, and to some extent engineering as she built an electric chair from household appliances.

Yukako may be described as yandere, and arguably may have predated or became the progenitor of the archetype. Araki comments that her personality was designed in reaction to the prevalence of moe

perfectionism applied to many female characters, as a statement that someone of any gender should be capable of being frightening or losing their temper.[4]

Yukako ignoring Echoes' kanji during her fight with Koichi Hirose

Yukako is a classmate of Okuyasu first introduced in the midst of a date with Koichi Hirose. During the date, she confesses her admiration for him but becomes severely aggressive when Koichi dithers in his response. Later, she jealously attacks a girl she believes to be a potential rival.

In response to false rumors muttered by Josuke and Okuyasu in order to put her off Koichi, she kidnaps him; attempting to indoctrinate him and "change him into a better person".

When Koichi resists, she soon threatens his life, forcing him to fight against her. During a tumultuous battle, Koichi heroically saves her life as she accidentally falls off a cliff.

Later in the story, Yukako is warned about Yoshikage Kira after Shigekiyo Yangu's death and advises everyone to be careful.

Yukako, still lovestruck, seemed to have learned from her mistake in trying to force Koichi. Unhappy about her unrequited love she made use of the services offered by Aya Tsuji's beauty-enhancing Stand, Cinderella, which rendered her into a bewitchingly attractive woman in the eyes of Koichi - for a price and a certain time limit, during which she was to use a special lipstick in order to uphold the "magic", i.e. the Stand's power. The Stand allowed her to grow closer to Koichi, who, after some trials and tribulations, warmed up to her and willingly became her boyfriend.

However, when she forgets to apply the magic lipstick, her face becomes deformed and she flies into a rage at Aya, who grants her a chance for her to return to her original appearance should she be able to pick her original eyes. Yukako has trouble picking the right one until Koichi arrives in her aid and decides that he will pick for her, but requesting that Aya take away his eyes should he make a mistake. Aya, unwilling to take the role of an antagonist, decides to give Yukako her original appearance back. Following this, Koichi and Yukako share a tender moment and the two presumably become a couple afterward.

Yukako also makes an appearance in Janken Boy Is Coming while sitting at Cafe Deux Magots with Josuke and Okuyasu.

Yukako last appears to bid goodbye to Reimi Sugimoto. In the anime, a scene is added with Koichi making lunch for him and Yukako. 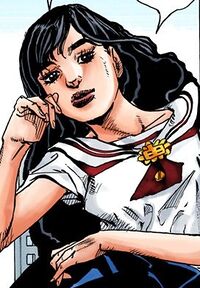 Yukako as she appeared in Thus Spoke Kishibe Rohan

Yukako reappears in Thus Spoke Kishibe Rohan - Episode 8: Deoxyribonucleic Acid. She asks Rohan for help, telling him to examine the strange Mao Katahira. However, Rohan claims that she is fine the way she is and leaves, making her angry. However, she could read within Mao when Rohan turned her into a book and gave Mao's mother Mai vital clues into finding the father.

Yukako was Chiho Futaba's neighbor when they were kids. She helps Koichi find Hanae Orikasa's killer, a student with red marks on his arms. Suspecting the killer might be in the same class as them, Yukako traps their class in the classroom so Koichi could raise the temperature with a word made by Echoes, making the students take off their jackets. Unfortunately, the killer wasn't in there. Several days later, Yukako witnesses the fire of Chiho's home and immediately informs Koichi.

Yukako makes her first video-game appearance in Eyes of Heaven as a playable character. She was confirmed alongside Koichi, Hol Horse, and Jean Pierre Polnareff.

Yukako is of the Stand User Style, but more specifically is she a Mode User, possessing the exclusive ability to Switch Mode. Unlike other Mode Users, Yukako's abilities and moveset do not dramatically change when she switches, nor is her mode one that requires a lengthy cooldown. This means that she is free to enter in and out of her mode as she pleases. Yukako is still a Stand User nonetheless, and as such, she is one of many characters with wildly varied abilities that grant her uniqueness in battle.

She is paired with Hol Horse in the Eyes of Heaven Tournament but was eliminated in the preliminaries by Jotaro Kujo and Vanilla Ice.

Replaces panels on the left and right with Yukako panels

Skill: Look at me