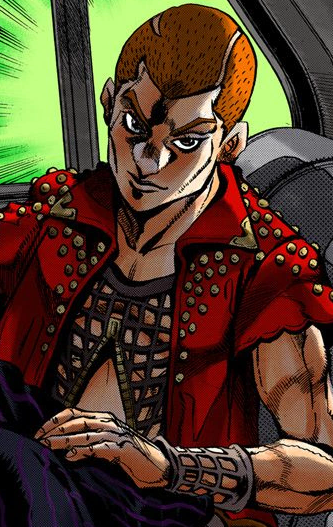 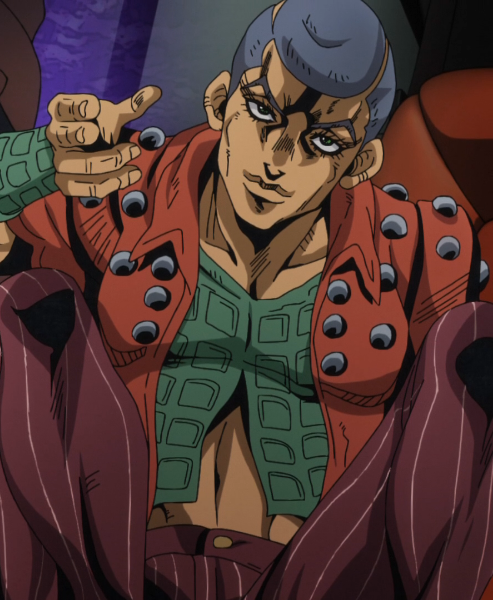 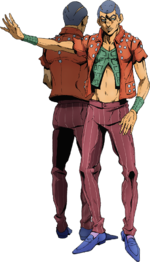 Formaggio is unfazed by Narancia's threats

Formaggio comes off as a very relaxed individual. Unlike most of the pursuing assassins, Formaggio introduces himself openly to Narancia, trying to chit-chat, and laughing at his own jokes. In the TV anime adaptation, this side of him is expanded upon by showing him acting the same way toward his teammate Pesci with a dark joke, inviting several teammates to a watch a football match, and taunting Illuso back when being sneered at. His relaxed attitude is highlighted by a verbal tic, as he regularly expresses his bored resignation to bad circumstances by saying "It can't be helped" (しょうがねーなぁーーー。, Shō ga nēnaaa.). Formaggio focuses more during battle and when he is pressured, however.

Like the other assassins, Formaggio shows almost no regard for human life and is quite sadistic in tormenting his enemies. For instance, he has no problem pitting a shrunken Narancia against a spider. Despite this, Formaggio also has some standards, expressing that he doesn't really want to see someone being eaten alive by a spider, and being horrified at Sorbet's gruesome death.

Formaggio's Stand, Little Feet, is sneered at by the rest of his team, leading to Formaggio slightly resenting them for this.

Formaggio possesses the Stand Little Feet, a humanoid Stand that allows him to shrink himself or other items and people.

Formaggio was a member of La Squadra Esecuzioni, a team of nine assassins working within Passione. However, the team was frustrated they only received compensation for each kills while the rest of the gang was getting rich from the drug trade. One day their teammates Sorbet and Gelato disappeared while they were trying to investigate the Boss' past. They found Gelato choked on a gag in his house, with a piece of paper on which was written the word "punishment". Later, the team received the sectioned body parts of Sorbet encased in formaldehyde, showing the team the power of the Boss. They despaired of ever finding about the Boss. However, they then heard about Trish Una, and thought that she would be the key to discovering the Boss' Stand ability. The team rebelled and began searching for her. Just after Trish was taken in by Pericolo, La Squadra Esecuzioni ransacked Donatella and Trish's appartment in search for clues, missing a crucial picture of Donatella that was taken by the Boss himself.

The anime adaptation expands on his activities. The night Sorbet and Gelato disappeared, he was on an assignment with Melone, Pesci and Prosciutto. Formaggio was tasked with killing an official and slipped a shrunk car in his drink, then eventually let it grow to its full size in the official's stomach. Formaggio was also the one to find Gelato's corpse in the anime.

Formaggio's introduction, at home with his cat.

Formaggio first appears in his office when he learns about Polpo's death. Since Polpo would be to go-to capo to handle matters related to Stand Users, Formaggio begins searching for other capos with Stand abilitiers and notices that Bucciarati and his team were absent from Polpo's funeral. He eventually finds Narancia in the middle of shopping and confronts him in his car. Pretending to have a conversation, Formaggio slashes Narancia's cheek by surprise with his Little Feet and interrogates him about Bucciarati's whereabouts. Angry Narancia summons Aerosmith, an aeroplane Stand that begins shooting at Formaggio and drops a bomb inside of the car. Formaggio shrinks to escape the explosion and hides inside of Narancia's pocket. There, he waits for Narancia to shrink small enough to be easily attacked. He notices the make-up Narancia has brought and concludes that his team are indeed protecting the Boss's daughter. He decides to persist with Narancia.

Despite Formaggio's doubts, Narancia manages to reach a payphone. Unwilling to let Narancia warn his team, Formaggio must cut the phone's cable, making his presence known. Narancia summons Aerosmith and locates Formaggio in his pocket. Formaggio is stuck as Narancia squeezes him in his fist and shows him for Aerosmith to shoot down. However, Formaggio then un-shrinks his pen, the force of the instantaneous growth propelling him towards the street. However, Aerosmith keeps finding him and attacking him, even when Formaggio hides in the sewers, underwater. The assassin sees Aerosmith shoot random rats and realizes that it can track the carbon dioxide lifeforms exhale. To hide, Formaggio stirs a mischief of rats and rides on one of them to ambush Aerosmith. However, Narancia notices that one of the rats is breathing harder than the rest and shoots at it, wounding Formaggio. Thankfully for Formaggio, he returns to full size and the injury is not fatal since Narancia's Stand has shrunk enough to make it weak.

Formaggio returns to the surface and corners Narancia. He demands that he reveal Trish's location. When Narancia refuses, Formaggio, remembering the fate that befell Sorbet and Gelato, becomes angry and puts Narancia into a bottle in which he is keeping a spider. As Narancia fights the spider, Formaggio notices a map that Narancia had dropped earlier, which reveals Trish's location. Formaggio laughs and points out that Narancia has marked all the roads, so he only has to follow it in reverse. Narancia then reveals that he had shot a hole in the gas tank of a nearby car, and was waiting for it to catch fire. The car explodes, lighting Formaggio on fire, and Narancia returns to his regular size.

Formaggio uses his own blood to douse the fire on his body and shrinks himself to escape. Narancia can’t track him because of all the carbon dioxide being released by the burning car. He decides that since he can’t track Formaggio, he’ll just make the fire bigger, and starts shooting and bombing all the cars on the street to trap him. With nowhere left to run, Formaggio returns to his normal size but is badly burned. However, the fires also allowed him to get within range of Narancia; at close range, Formaggio has an advantage because of Little Feet's greater speed. Both call forth their Stands and attack, but unfortunately for Formaggio, Aerosmith is faster and shoots Little Feet's vital spots, inflicting fatal damage.

As he dies, Formaggio takes solace knowing that not only did he make Narancia fail his mission, the other members of Squadra Esecuzioni now have a lead on Trish Una. 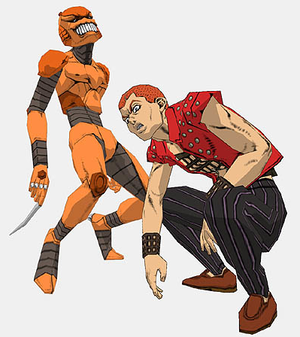 File:Giogio14.png
Formaggio appears as an enemy character in GioGio's Bizarre Adventure during Chapter 3-1. During the fight, Formaggio alternates between attacking the player head-on and running away using his Stand, Little Feet. Formaggio can use Little Feet's ability on himself when hiding behind one of the cars in the stage to make himself smaller; in his small form, Formaggio can quickly move around the stage, hide on the underside of rats, use sewer grates as a method of transportation, and sneak up on the player in order to surprise attack them. Though he possesses various attacks such as throwing furniture and performing a headbutt, Formaggio's most dangerous attacks involve his Stand, Little Feet: if the player is cut by the Stand's sharp finger, they shrink to a minuscule size and must deal with a relatively-large Formaggio for fifteen seconds. While the player is shrunken, Formaggio can either stomp on them or grab and throw them, dealing heavy damage if either attack lands.
Formaggio / Little Feet
Commands
Normal Mode

Replaces random panels with priority on Partner panels, to Formaggio panels.
By using it, the Boost Lv is raised, and the number of replaced panels increases.

Skill: I'll kill you all!