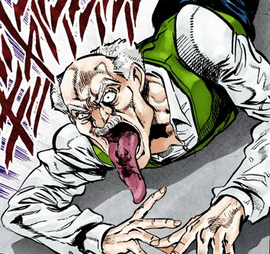 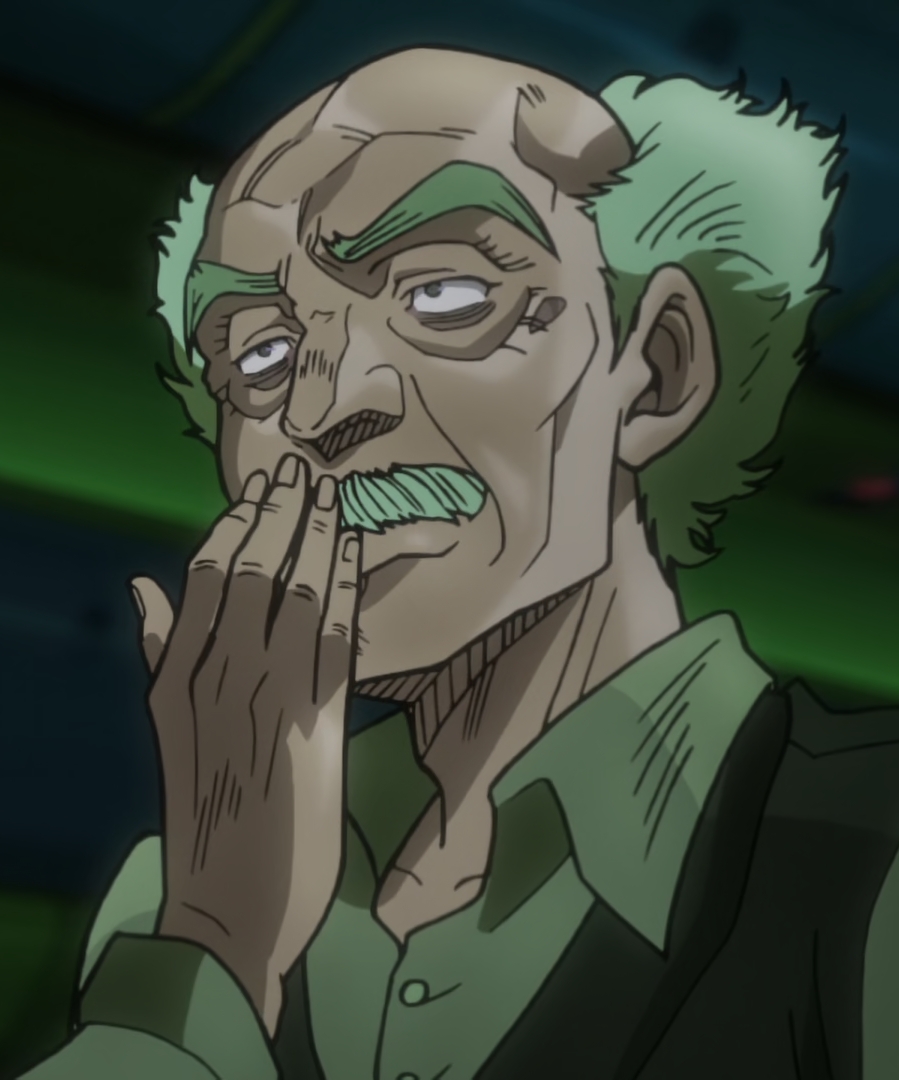 Gray Fly is an assassin sent by DIO who attacks the group aboard a plane traveling from Tokyo to Cairo, eventually crashing it into the ocean near Hong Kong. He is a Stand User and wields Tower of Gray.

Gray Fly appears as a small old man with a gray horseshoe hairstyle, a thick moustache, and an imprint of a stag beetle on his abnormally long tongue.

As he tries to pass off as a normal person, Gray Fly wears a plain shirt, a sweater vest and dark pants.

Gray Fly is a bloodthirsty mercenary out to kill people.

According to Muhammad Avdol, Gray Fly has been known as a Stand user who causes multiple accidents and kills people to steal their valuables. Moreover, Gray Fly is extremely cruel and unhinged as his modus operandi is to rip off the tongues of his targets. His sadistic personality drives him to kill people just for fun and during his appearance, he sent Tower of Gray to kill several passengers of the plane and write the word "massacre" in blood on the walls. Kakyoin and Avdol note that DIO didn't need to use a spore to control him and suppose that he was simply hired to kill the Joestar group. However, Gray Fly then demonstrates a surprising amount of loyalty, claiming that all Stand Users will bow to DIO and that the heroes will never reach Egypt.

As with most Stand Users, Gray Fly is confident in his Stand Tower of Gray, notably in its speed, and has boasted that it could evade point-blank gun shots.

Gray Fly's Stand is Tower of Gray, which takes the form of a giant and agile stag beetle (apparently faster than Star Platinum). It is capable of easily tearing flesh apart. Gray Fly typically physically attacks his victims with his Stand.

Muhammad Avdol elaborates that with the speedy and discreet Tower of Gray, Gray Fly is able to not only cause mass murders but make them appear to be mere accidents.[2]

Gray Fly is a Stand user involved in many thefts and mass killings disguised as accidents involving plane crashes and train accidents, including a plane catastrophe in England with 300 casualties, with no signs of his crimes. He gained enough notoriety among Stand users to be known by Muhammad Avdol but his Stand's appearance was still unknown, as even the fortune teller was surprised to find out an insectoid Stand could exist. According to Avdol, Gray Fly might have acted on DIO's orders. He is one of the Tarot Cards representatives sent by Enya the Hag to kill the Joestar group.[2]

Blending in among the passengers

Gray Fly boards a plane en route to Cairo via Bangkok as one of the passengers to assassinate the Joestar Group. Posing as an ordinary old man, Gray Fly lets his Stand attack Jotaro.

Tower of Gray attacks Jotaro first, showcasing its speed and ripper tongue and almost rips off Jotaro's tongue. In order to make his opponents understand his true powers and his intentions, he cuts off the tongues of the other passengers with Tower of Gray, then proceeds to write the word "Massacre" on the wall with their blood.

It is at this point that Gray Fly stands up, leaves his seat and tries to reach the bathroom, pretending to be nothing but a harmless old man. He then stops and starts screaming at the sight of blood, probably in an attempt to wake up the passengers and put the Joestar group into more trouble. However, he is swiftly knocked out by Kakyoin, who stands as Tower of Gray's new opponent. Kakyoin manages to trick the Stand by distracting him with his Emerald Splash while hiding the tentacles of his Hierophant Green among the plane's seats. The strategy succeeds, as the tentacles grab Tower of Gray and destroy it, leading to Gray Fly's death as well.

However, before dying, Gray Fly managed to kill the plane's pilots in a last attempt to lead the protagonists to the same fate. Although his head and tongue were split in two because of Kakyoin's attack, he managed to stand up and taunt them, saying that they will never get to DIO even if they were lucky enough to survive the crash. He also warns them that DIO's own allies will be coming after the protagonists. Thanks to Joseph's piloting skills, the passengers survive the crash but the Joestar Group is now forced out of taking any plane to Egypt.

The events from Tower of Gray chapters appear in a different form on the game. Instead of taking place on an airplane, the fight against Tower of Gray occurs on Jotaro's school and Gray Fly appears a school janitor rather than a passenger.

The events from Tower of Gray appear on Super Story mode (PlayStation version only), as the player must defeat Tower of Gray using Kakyoin. After the battle, Gray Fly briefly appears and is knocked down by the heroes (much like in the manga storyline).

Tower of Gray's special battle can also be unlocked on Gallery mode (Oingo and Boingo's book), but the player can only play as one of the eight heroes (including Young Joseph and New Kakyoin).

Both the Stand Tower of Gray and the user Gray Fly posses a Metal Striker on the game as part of the PART 3 characters. They both share the same FINISH move of Tower of Gray attacking the defeated opponent with its tongue.

Gray Fly appears in Diamond Records as a playable character in both the Action Battle and Tactical Battle game modes. He has one 'Tactical' type 5 star statue. Gray Fly's moveset in both game modes is comprised of various attacks inspired by the anime, using his stand Tower of Gray. His attacks can target enemies from a longer distance than other stand users.
Moveset

Gray Fly's basic attack string is a combination of up to five various strikes using Tower of Gray. In Tactical Battle, this is cut down to only three hits.

Tower of Gray is summoned to strike an opponent twice.

Tower of Gray uses its Tower Needle to pierce opponents.

Tower of Gray is summoned above an opponent where it strikes them with its Tower Needle. (Unlockable)

Gray Fly releases Tower of Gray from his mouth, and "Massacre!" is written on a wall. Tower of Gray then flies around back and forth, damaging a range of opponents multiple times. In Tactical Battle, this damages all opponents present on the stage.