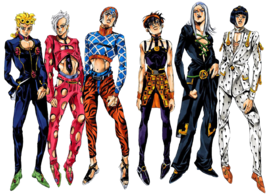 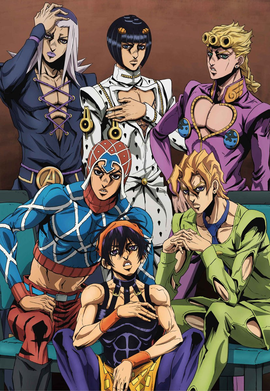 After delivering Polpo's treasure to Pericolo, Bucciarati was promoted to the rank of capo, gaining all the territories and businesses under Polpo's management. However, the team had no time to enjoy their standing, as they were assigned a mission to bodyguard Trish Una, the Boss' daughter. Managing despite La Squadra Esecuzioni chasing them across all of Italy, Bucciarati managed to deliver Trish to the Boss, only to find out that he planned to kill her. Angered, Bucciarati would rebel and the majority of his team would follow him.

The team was assigned to Trish Una's protection and escort as she was the Boss' daughter, and they hid in the countryside for several days. However Formaggio of La Squadra Esecuzioni, a team of assassins gone rogue, tracked Narancia and a violent fight ensued. While Formaggio was killed, the collateral damage would attract the other assassins, resulting in the Boss assigning Bucciarati another task.

The Boss then asked Abbacchio to rewind events inside the turtle, reenacting Pericolo's last instruction to retrieve a disk in Venice's train station before committing suicide. While the team would go to the city with a boat, Giorno and Mista were sent to retrieve the disk, and defeated together the assassin Ghiaccio. The disk contained the Boss' last instruction to the gang: head to the San Giorgio Maggiore island and have one person deliver Trish to the top of the belfry. Bucciarati accompanied Trish, but the Boss revealed his secret motive to kill her, an action which outraged Bucciarati. He rebelled openly and fought the Boss, however King Crimson's time erasure was an invincible power and Bucciarati barely escaped with the assistance of Giorno, dying but revived by him. Bucciarati then announced his rebellion to the rest of his subordinates, and though all were terrified, they joined Bucciarati in his rebellion save Pannacotta Fugo.

The Gang investigated La Costa Smeralda, where the Boss had taken a photo of Trish's mother, and Abbacchio's Moody Blues rewinded time to discover the Boss' face. However the event's age meant that it would take time to reach it. Bucciarati and Narancia were lured away by an attack, while Giorno and Mista looked over Trish. When Bucciarati came across a child tied up and with his clothes stolen, he realized too late that Abbacchio was left alone and defenseless, as he was killed by the Boss. Fortunately, his death was not in vain as the gang uncovered a mold negative of the Boss' face and handprints. While their search for any data concerning him was fruitless, it caught the attention of a third party which revealed the Boss' name: Diavolo, and proposed to meet in Rome so they would be given an Arrow able to unlock a power greater than that of King Crimson and able to defeat it. The group, despite initial skepticism, accepted the proposition and headed to Rome, followed by Diavolo himself.

The gang awakened, realizing that their souls, along with the entire population of Rome, were switched. Initially believing that Diavolo was in Bucciarati's body, they instead killed Doppio, and Diavolo killed Narancia in retaliation without anyone knowing how. The gang then followed Chariot Requiem into the streets of Rome to find a way to retrieve the Arrow from it, accompanied by Polnareff who was now in Coco Jumbo's body. Giorno realized that Diavolo was possessing one of them, but Diavolo hijacked Mista's body, having managed to find Chariot Requiem's weakness, and almost managed to take the Arrow. However, with help from Trish, Bucciarati sacrificed himself finishing off Chariot Requiem, forcing everyone's soul back in their bodies before Diavolo can use the Arrow.