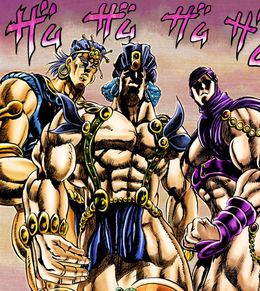 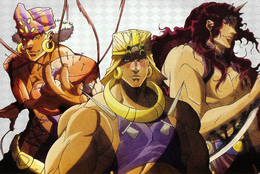 The Pillar Men generally have vastly superior physical abilities than humans in all aspects, surpassing by far even the strongest of Vampire.

While a Vampire can exert a pressure of 235 kg/cm² with his fingers,[1] the Pillar Men have an even greater strength. Santana's Rib Blades can exert a pressure of 825 kg/cm²[2] and his finger pressure would have been about 925 kg/cm² if Stroheim's estimates were accurate.[3] Wamuu was also able to casually break a stone pillar then lift it to crush Joseph Joestar.[4]
Super Toughness

The Pillar Men's bodies are exceptionally tough. For instance, Esidisi was able to swallow a dynamite stick and withstand its explosion in his stomach.[5] Similarly, Kars was not wounded when he fell off a 175 m tall cliff.[6] The Pillar Men have also a high resilience to pain and think little of losing limbs or piercing themselves on spikes. In fact, they can still function even if they are cut in half or even reduced to a head or a brain. However, the Ripple constitute a weakness for them. While their skin can resist a sufficiently weak Ripple and disperse it, a concentrated Ripple can pierce their skin and melt their bodies.

Pillar Men are able to move extremely quickly, as Wamuu demonstrates when he moves between the soldiers of a platoon and ties them together before they are able to react.[7]

User(s): All
Pillar Men possess extremely enhanced senses. These are demonstrated a number of times, such as Santana sniffing out the area like a dog, or Kars being able to detect the number of people in a room via heat signatures.[8] Likewise, Wamuu's horn allows him to read the wind and detect other object via their breathing.[9]
Super Intelligence

The Pillar Men's most dangerous trait is their superior intelligence. They are capable of perfect recall and are able to instantly analyze and understand the mechanics behind anything including complicated things such as languages, machinery, tactics, systems, and people's minds and actions, within a matter of seconds. Santana instantly learned the procedure to dissemble a gun that might have taken a human hours to learn; and Esidisi was able to match Joseph in wits. The Pillar Men were also able to learn the modern language in moments, just by listening to others speak.

The Pillar Men can freely change and manipulate their bodies to a greater degree and speed than any vampire created by the Stone Masks, being able to dislocate or even break their own bones as well as flatten organs in order to achieve any form they desire. Even if a body part is severed, the Pillar Men can still remotely control them. With their near-immortality and powers of regeneration, they can survive, endure attacks, and restore their bodies even after being reduced to only their brain. They can also slip into another organism's body and control them from the inside. One victim said he felt an overwhelming pleasing sensation thanks to that.

This ability and their body manipulation appear to only be usable by those associated with Kars and the Stone Masks; the Pillar Men race originally used primitive weapons such as spears before they were massacred.[10] 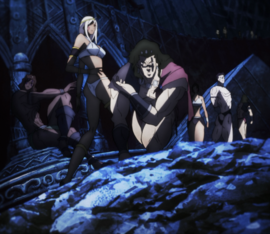 The four remaining pillar men first appeared in human history 5000 years before Battle Tendency, capturing hundreds of thousands of humans for experimentation with the stone mask.[11] Kars found through his research that a flawless Red Stone of Aja called the Super Aja would be essential to perfect the Stone Mask and complete their transition into ultimate beings. To this end, Kars took Esidisi and Wamuu to the old world while leaving Santana behind in Mexico.

The three reached as far as imperial Rome where a emperor was rumored to possess a Super Aja, nearly wiping out the entire Ripple Clan in the process.[12] Unable to find the stone, the Pillar Men were forced to hibernate, fusing themselves into a stone wall hidden within a cave under the Colosseum near the 1st Century A.D. The wall itself was rigged by the Pillar Men as a trap to feed themselves on any greedy humans while sleeping, as seen with Mario Zeppeli. The Aztec correctly predicted that the Pillar Men would reawaken in the year 2852 of the Aztec calendar, the equivalent of the year 1938. 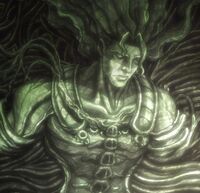 Several days later, Wamuu awakened himself and killed off the team watching over him before reviving Kars and Esidisi. Coincidentally, Speedwagon, Joseph and Caesar Anthonio Zeppeli along with a soldier named Mark came into the cave to join with the Nazis. When Wamuu inadvertently gave Mark an agonizing death, he provoked Caesar and defeated him. Wamuu also defeated Joseph, who lured him away from Caesar and Speedwagon while convincing Wamuu to spare him for a future confrontation. But Wamuu and Esidisi, the latter out of interest, placed their poisoned wedding rings in Joseph's body to force him to seek them. The three Pillar Men, after setting up base in the San Moritz hotel in Swizterland, proceed to search Europe for the Super Aja.