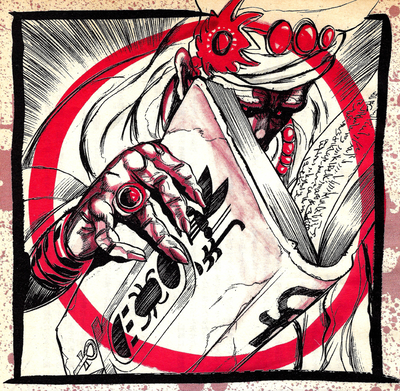 The self-proclaimed Scribe Ani (書記アニ, Shoki Ani) is a primary antagonist featured in the light novel The Genesis of Universe, based on Stardust Crusaders. He particularly appears in the second chapter, "The Gravestone of Red-Hot Sand".

The Scribe Ani is a Stand user with The Genesis of Universe, an ancient Stand bound to a history book that can materialize stories that he reads. 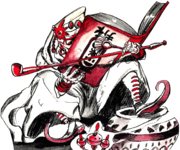 The Scribe Ani is a man with a mummy-like appearance and hunched back, who achieved immortality due to his Stand. His face and body are covered in wrinkles and he has sharp nails. His attire consists of a turban with a sarpech and other ornaments, a kaftan, and a pair of curled-toe shoes.

He also wears a beaded necklace, several bracelets, hoop earrings, and a large ring on the ring finger of his right hand. The Scribe Ani may also be seen with a long smoking pipe.

He speaks very slowly due to his old age. He is extremely respectful towards the history and traditions described in The Genesis of Universe, as he shows when quickly losing his temper after discovering that Joseph and Polnareff had damaged his Stand. He pledges loyalty to DIO just because he also had immortality.

The Scribe Ani's Stand is The Genesis of Universe, bound to an ancient book. It can materialize the history from the book that the user reads, such as summoning the Egyptian goddess Ammit.

The Genesis of Universe (創世の書)

The Scribe Ani is a mercenary hired by DIO to kill the Joestar group in Cairo. He claims that the only reason he is still alive and didn't die from old age a thousand years ago is the existence of his Stand, which holds an ancient secret method of soul reincarnation, based on the old mummification method from the New Kingdom era. Because of that, his real identity remains unknown. He pledged loyalty to DIO as soon as he could because DIO also had "eternal life" as a vampire and was likely to be the conqueror of the world.

The Genesis of Universe: The Gravestone of Red-Hot Sand

The Scribe Ani follows the Joestar group and defeats Jean Pierre Polnareff. Believing Polnareff to be dead, Ani corners Muhammad Avdol and Joseph Joestar with his Stand, summoning many enemies to fight them. Polnareff appears to save them and works with Joseph to damage the Stand, but the plan ends up with everyone overwhelmed by more enemies. Jotaro finds out from a merchant that his friends disappeared and goes to the rescue, The Scribe Ani tries to overwhelm Jotaro Kujo by creating Ammit, the strongest ancient beast of Egypt. Ammit proves to be too much for Star Platinum to handle, but suddenly disappears after Polnareff and Joseph destroyed the part in The Genesis of Universe's pages where the creature is described. Jotaro blinds the Scribe Ani by throwing a perfume bottle at him so he wouldn't be able to summon anything else, and then destroys his body with a barrage of "Ora ora" punches. The nature of his body akin to that of a mummy lead to it crumbling away as ash, disappearing into the wind along with his Stand which faced the same effect, his real identity remaining unknown.[1]