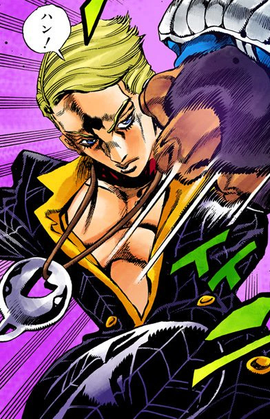 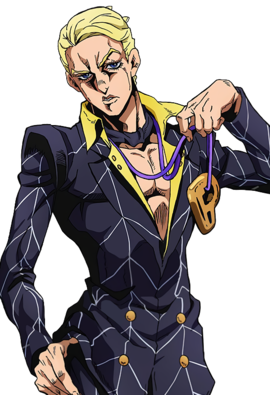 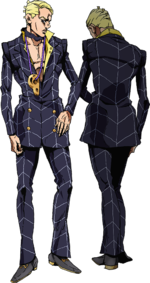 Prosciutto is a fairly serious man. He is shown to always be focused on his mission and adhering to La Squadra's motto of holding one's ground, even mortally wounded, to the letter. He puts this into practice and expects his underlings(s) to also do the same. He doesn't tolerate any deviance of this attitude, especially when it's from his comrades and subordinates, and failing to adhere to the ideal such as in the case of Pesci on one occasion, would result in a brief beating being handed out as a reminder. Prosciutto is usually very composed, meeting any obstacle with cold efficiency, and carrying out his objectives without hesitation. The TV anime adaptation expands upon his severity, calling out Formaggio for botching an assassination attempt with an unneeded casualty and regularly shouting at Pesci for not showing a manly enough face.

Despite his serious and cold demeanor, he is also shown to have a somewhat caring side towards his comrades. As the superior of the assassin duo, Prosciutto frequently points out his fellow assassin Pesci's lack of confidence in his own abilities, and on multiple occasions tries to comfort and convince him of his own capabilities. This reliance is not unfounded, however, as Bruno Bucciarati determines from his battle with Pesci that Pesci's abilities are actually more dangerous than Prosciutto's. While he is severe, Prosciutto is also able to recognize the valor of his foes. Thus, although he chastises Bucciarati during their fight for an error in judgement, Prosciutto soon recognizes Bucciarati's resolve to sacrifice himself for his men and praises his ability as a capo.

Prosciutto uses his Stand The Grateful Dead to age people in a large area, discriminating between individuals via near-negligible differences in their body temperature.

Prosciutto was a member of La Squadra Esecuzioni, a team of nine assassins working within Passione. However, the team was frustrated they only received compensation for each kills while the rest of the gang was getting rich from the drug trade. One day their teammates Sorbet and Gelato disappeared while they were trying to investigate the Boss' past. They found Gelato choked on a gag in his house, with a piece of paper on which was written the word "punishment". Later, the team received the sectioned body parts of Sorbet encased in formaldehyde, showing the team the power of the Boss. They despaired of ever finding about the Boss. However, they then heard about Trish Una, and thought that she would be the key to discovering the Boss' Stand ability. The team rebelled and began searching for her. Just after Trish was taken in by Pericolo, La Squadra Esecuzioni ransacked Donatella and Trish's appartment in search for clues, missing a crucial picture of Donatella that was taken by the Boss himself.

Recalling that Pesci has detected a suspect life-form in the driver's cabin, Prosciutto decides to check inside of it. Pesci express self-doubt but Prosciutto reassures him and tells him that he must have confidence in his Stand. Pesci mentions that he was about to check under the seat and the duo does see recent droppings. Prosciutto breaks through the machinery and discovers Coco Jumbo. However, Bucciarati ambushes him from above the ceiling and Prosciutto is forced into a close-range fistfight. At first, Sticky Fingers proves itself more powerful. When Bucciarati positions himself to kick Pesci, Prosciutto attacks, thinking that the capo has made a bad move, but Bucciarati splits his head to avoid The Grateful Dead's fist and counter-attacks. However, Bucciarati is exerting himself and thus his body temperature rises. Thanks to The Grateful Dead, Prosciutto gains a physical advantage over Bucciarati, but the capo then grabs Prosciutto and throws himself off of the fast-moving train. 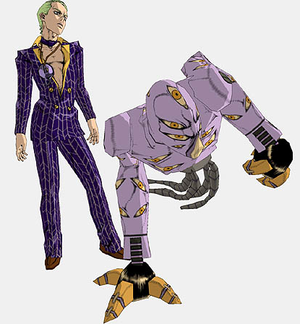 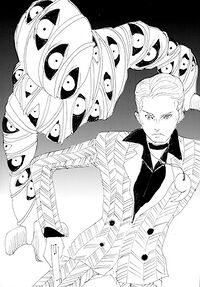 Nero Nero Island, where the base of Passione is located, suddenly grows legs and starts moving through the ocean headed toward Morioh. Some ordinary citizens panic and attempt to escape at the island's harbor. Prosciutto, Cioccolata37, Secco37, Pesci37, Ghiaccio37, and Melone37 ambush and murder them. Secco's Evil Dead conceals the harbor, making their actions invisible to those within the island, such as Bruno Bucciarati37. One man manages to escape and tries waving desperately toward Morioh for help before he is killed as well.