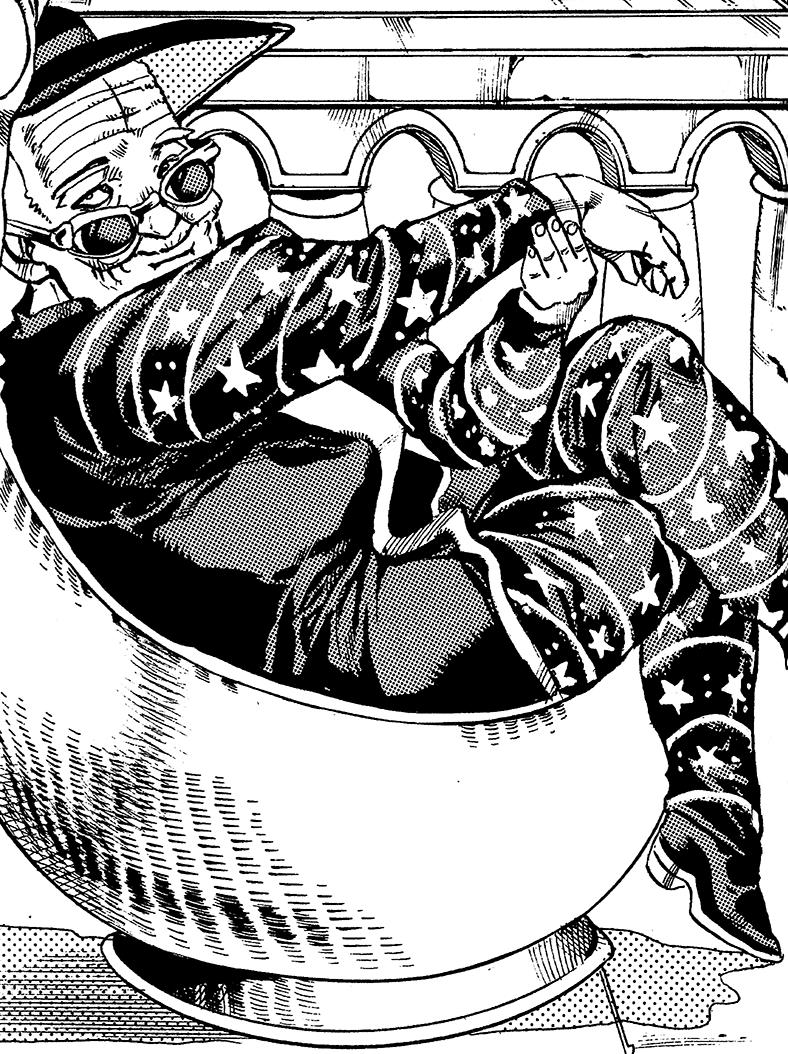 Reduced to a pulp by Sticky Fingers

Sogliola Lopez is an old short Italian man. Not much is described of his appearance but it is shown that he has a dark suit whose arms and legs are covered in star motifs and that he wears sunglasses.

Sogliola is an overbearing and ambitious capo operating in Venice.

As a capo, Sogliola demonstrates a high level of competence. He operates in Venice where the police is much stricter than in other places and has managed to make Passione's operations successful while keeping the police in check. Lopez is also a meticulous man. He's kept tabs on the Stand Users present in Venice and has devised a multi-layered trap in which Team Bucciarati would be threatened by his power, an assassin, and one of the Stand Users in town in rapid succession. As such, he managed to exploit Fugo's Purple Haze and turn Coniglio's The Cure into a threat for Team Bucciarati.

Lopez demonstrates several evil qualities. During his childhood, Lopez was bullied and dreamt of acquiring power to dominate everyone. His ambition is still present in the present time and he callously allowed Purple Haze to cause several massacres in town to advance his plan. Because Venice is a minor territory for the gang, Lopez is unsatisfied with his current standing and fulfills his Boss's orders more to advance himself rather than out of loyalty. As a superior, Lopez is always overbearing and looks down on his subordinates whom he always insults. Whenever he has the advantage, Lopez has trouble resisting the urge to laugh at his foe's misfortune.

Joy Division allows Lopez to switch objects between his two hands. Moreover, he can switch any object and even choose to delay the switch so that it happens later.

Lopez is a rather intelligent capo. He has mastered his Stand and has managed to design several creative uses for him. Moreover, he's managed to create an elaborate plan to kill Team Bucciarati by exposing them to several dangers in short succession, all plans using the tools at his disposal and in a short enough timeframe that the team hasn't had time to leave Venice.

Sogliola is a Passione capo who operates in the city of Venice. It is known that he was bullied in his youth and developed a great ambition. He eventually joined Passione and rose up to the rank of capo. He built up a second identity, Seppia, to fool the police and have a better control of the organization's traffic in the city. He is a Stand user, but since his power is not considered very useful or powerful, he is denied a carrier advancement.

Over the years, Lopez had compiled a list of all the Stand users in Venice, noting the existence of Coniglio and The Cure.

Things change when the Boss himself e-mails Sogliola, requiring Bucciarati's group to be executed. Seeing the assignment as a possibility to advance in Passione and move out from Venice, Sogliola persuades Pannacotta Fugo to help him in exchange for the organization's forgiveness. He elaborates a plan to kill the traitors. He first exposes Coniglio's The Cure to Purple Haze's virus, making it absorb the virus, and the pain and suffering of its victims. He also used his power on smuggled sea mines and polystyrene broken into small pieces and scattered in the sea. The moment the traitor took to the sea, Lopez teleported his mines in place of the polystyrene, forcing them to head for the Saint Mark square, where Rigatoni was also posted to shoot the traitors. However, Mista and Giorno defeated him.

In the basilica, Lopez unleashed The Cure, which had grown to a giant size because of Purple Haze. Lopez observed the battle protected by a biohazard suit but it was somehow pierced and Lopez retreated to an exit route. He is however betrayed by Fugo who has only pretended to obey him in order to save his friends. Cornered by Team Bucciarati, Sogliola attempts to escape in the sewers by teleporting, but is intercepted by Mista and caught up to by Bruno Bucciarati. Ensnared into vines, Lopez attempts to touch Bucciarati to switch places but Bucciarati pummels him with Sticky Fingers.