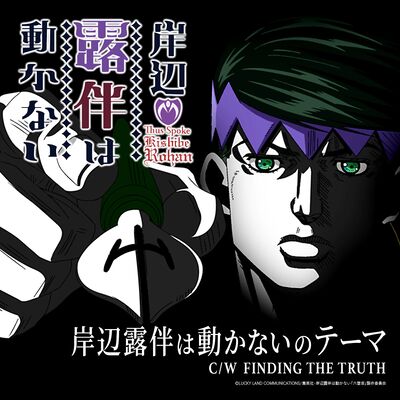 A digital single of both tracks was released on July 19, 2018, the same date as the release of the 2nd Thus Spoke Kishibe Rohan manga collection and OVA episode.[1]

The opening opens on the main title, with black ink flowing in the background, covering the screen and acting as a fade to black. Rohan then emerges and opens his eyes; as he raises his fountain pen to draw, the camera zooms into the slit of the nib.

A continuous flow of black ink then occupies the screen, taking several forms.

For the "Confessional" and "The Run" episodes: the ink takes the form of Yoma Hashimoto running. His running leaves feathers in his trace, which then fade to be replaced by the form of a popcorn falling in the mouth of the confessor. The ink turns into the fence of the confessional, which bursts, staining the screen with ink.

The camera then pans to reveal Rohan, sitting alone at a table in an empty room. The light dims until only Rohan's silhouette and the windows's exterior are visible against the pitch black background. The opening finishes with the episode title.

Lyrics for "FINDING THE TRUTH"

Millionaire Village (& Mutsu-kabe Hill)
The Run (& At a Confessional)