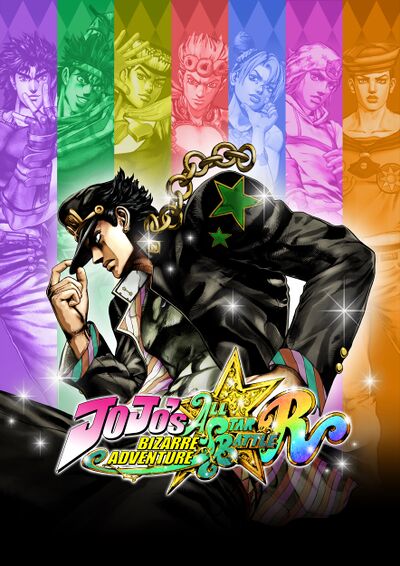 The first trailer for JoJo's Bizarre Adventure: All-Star Battle R was released as part of the Playstation State of Play event on March 9, 2022, with an announced release date of early autumn of the same year. The game is currently slated to release on September 1, 2022, with the international console versions and Japanese Steam version coming the following day.

The color palettes and designs of Part 1 to Part 6 characters in All-Star Battle R are noticeably different from those of the original All-Star Battle, having been modified to closely follow the looks in the various anime adaptations of the series. In addition, the available Japanese voice actors working on the anime reprise their roles in All-Star Battle R. 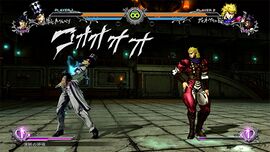 The gameplay of All-Star Battle R is based on the one-vs-one 2.5D fighting game style of All-Star Battle. Mechanics such as Easy Beat, Stylish Evade, Heat Heart Attack and Rush Mode have been confirmed to return in this game with slight differences.[1]

An additional gameplay mechanic named Support Attack (アシストシステム, Ashisuto Shisutemu, lit. "Assist System") allows players to summon a second character during a match, allowing them to chain together longer combos, set traps, or use long-range attacks as an Assault Assist. Assist characters can also be used to break an opponent's combo with a Reverse Assist, though this produces a longer cooldown (shown by the assist character's icon being tinted red). The lights below an assist character's icon act as an indicator of how many more times they can be used within the round, with the maximum number of lights differing by character. Each character has a unique assist attack that falls into one of several types, creating a new layer of strategy when selecting characters.

In addition to Support Attack, another gameplay mechanic by the name of Stylish Guard (スタイリッシュガード, Sutairisshu Gādo) has been added, allowing players to buffer a Stylish Evade until it is triggered by an attack (similarly to many characters' counter moves). This allows players to create an opening to counterattack, but the move's reliance on predicting the opponent's attack and immobilization of the character performing it serve as drawbacks.

The Nintendo Switch version can also play multiplayer offline through local communication by wirelessly connecting with another Nintendo Switch. It is not possible to play by using the Joy-Con sideways, so each player needs their own set of Joy-Cons.

So far, the following game modes have been confirmed to appear in All-Star Battle R:[4]

So far, all stages from the original All-Star Battle are stated to return, though Kennedy Space Center only appears in promotional material and is not listed on the game's website.[5] However, promotional material also shows that additional stages have been added to the game, including several from Eyes of Heaven. The Stage Hazard mechanic is also planned to make a return, with new Stage Hazards added to the game's new stages. 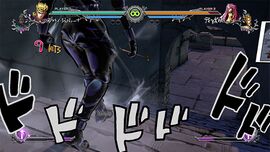 The Colosseum stage returns from Eyes of Heaven, with a Stage Hazard involving Chariot Requiem

★ Denotes stages that are new to All-Star Battle R and did not appear in Eyes of Heaven as playable stages in Versus/Online modes.

☆ While the El Cairo Overpass stage did appear in Eyes of Heaven, it was exclusive to the Story Mode battle between Jotaro and DIO.

JoJo's Bizarre Adventure: All-Star Battle R is planned to have a complete base roster of over 50 playable characters, with at least 4 DLC characters. All characters from All-Star Battle are planned to return,[6] with Robert E. O. Speedwagon, Mariah, Pet Shop, and Diego Brando confirmed as new additions in a later trailer.[7] Trish Una and Prosciutto have unofficially been revealed as new characters to the game's roster, having been unintentionally included in game menus shown in promotional materials.

An early-access demo for the game, exclusive to the PlayStation 4 and PlayStation 5, was released on June 16, 2022 and was available to play until June 22, 2022. The only playable characters in the demo were Jonathan, Jotaro, DIO, and Jolyne. Online Mode and Practice Mode were the only playable modes.[8]

There are currently four DLC characters planned for the game. Their estimated release dates are on the European Nintendo eShop.

Note that these characters will not be part of the base 50-character roster.[9]

The Digital Deluxe Edition includes the full game, the season pass, and a color set for Jonathan, Joseph, Jotaro, Josuke, and Giorno, based on their white outfits in the JOESTAR The Inherited Soul event.

The Collector's Bundle includes the full game, the special event color set from the Digital Deluxe Edition, and a Special Color version of the Grandista series Jolyne Cujoh 10 inch statue.