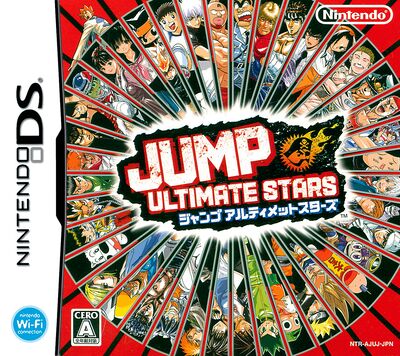 Jump Ultimate Stars (ジャンプアルティメットスターズ, Janpu Arutimetto Sutāzu) is a 2D fighting game developed by Ganbarion in 2006 for the Nintendo DS. It is the sequel to Jump Super Stars and a crossover of a large number of Jump titles, including JoJo's Bizarre Adventure.

The gameplay is largely similar to that of Jump Super Stars, with the koma (panel) system returning. The gameplay has also been changed slightly from Jump Super Stars. The game gives battle characters the ability to dash and attack while guarding, which, instead of breaking the guard of the opponent, forces them to change characters, and can be identified by a green glow coming out of the characters which executes it. Battle characters now have a new ability known as Ultimate Actions. The Ultimate Actions are different for each character, as some either recover health, recover SP, or can be used to dodge enemy attacks.

Another new feature added is the Evolution Chart. This area allows players to upgrade their characters by spending gems to buy a new koma. Each character has a chart, starting from the one block Help koma and branching off into the two to three block Support koma and the four to eight block Battle koma. Some characters have alternate block paths which unlock a different type for that character, while others can be used to unlock koma for characters from the same series, quizzes for the series, and new worlds in the Story Mode.