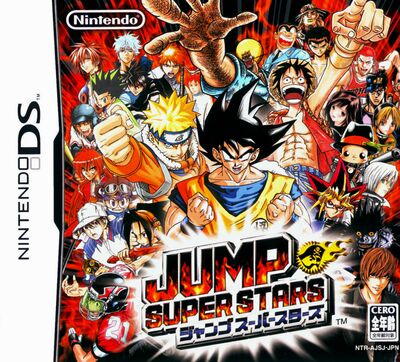 Jump Super Stars (ジャンプスーパースターズ, Janpu Sūpā Sutāzu) is a 2D fighting game developed by Ganbarion in 2005 for the Nintendo DS. It is a crossover of 27 different Jump titles, including JoJo's Bizarre Adventure. It was followed by Jump Ultimate Stars in 2006.

Koma (meaning "panel") is the term for the characters that can be used in-game as assistance. Each koma uses anywhere from 1 to 7 squares of a Koma Deck appearing on the bottom DS screen. The deck has 20 squares (4 x 5) on which to place koma. There are three types: Help Koma, Support Koma and Battle Koma.

The player can build and store up to ten Koma Decks, and each deck must have at least one Help Koma, one Support Koma, and one Battle Koma to be valid for use in battle. Ally boosting is done by placing koma next to each other in the Deck Maker. If the koma placed next to each other are "compatible", their attributes will go up, providing small bonuses. Battle characters can receive a longer health bar, or increase the maximum number of special attack gauges.