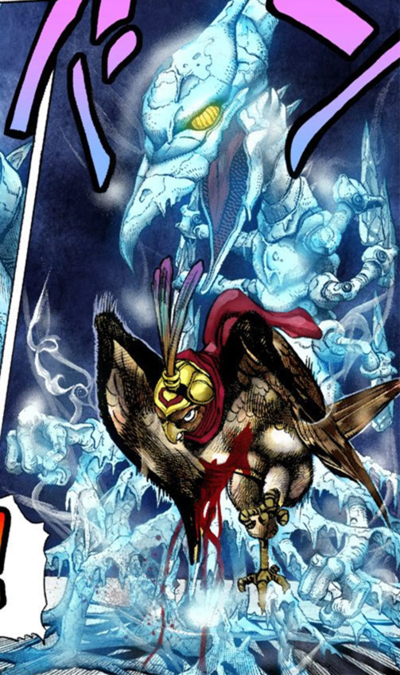 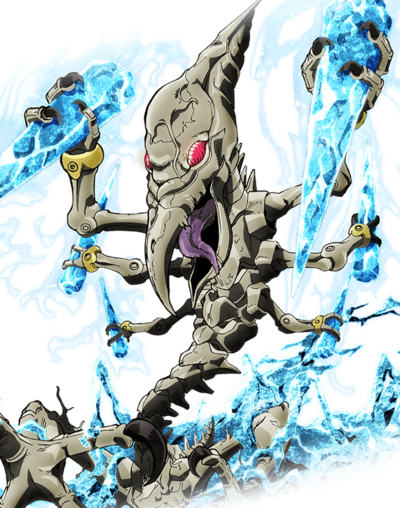 Destructive Power
B
Speed
B
Range
D
Stamina
C
Precision
E
Developmental Potential
C
A
B
C
D
E
A: Very Good
B: Good
C: Average
D: Poor
E: Very Poor
“
Horus, the falcon god, was worshiped by the Ancient Egyptians as the guardian of the royal family. The Eye of Horus, also known in Ancient Egyptian as the Wadjet Eye, was said to see its prey from several kilometers away. The eye symbolizes protection and royal power!
”
—Narrator, Chapter 223: The Gatekeeper of Hell, Pet Shop, Part 2

Horus (ホルス神, Horusu-shin) is the Stand of Pet Shop featured in the third part of the JoJo's Bizarre Adventure series, Stardust Crusaders. Bound to ice, it vaguely takes on the appearance of a bird skeleton and allows Pet Shop to generate extreme cold temperatures. 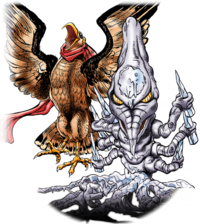 Horus rarely appears in its true form, spending most of its time bound directly to Pet Shop's body. When it does manifest separate from its master, it appears as a large, skeletal creature with the head of a pterosaur. It has multiple limbs ending in bird-like talons, including six small arms on its torso and several pairs of legs on its lower body, giving it some resemblance to a spider or centipede.[1]

It represents Horus, the Egyptian God of the sky.

Horus is a powerful ice Stand

Horus is a powerful ice Stand that allows Pet Shop to perform powerful ranged attacks, which, coupled with Pet Shop's agility and flight as a falcon, make for a fearsome opponent in battle.

Horus gives its master the ability to generate ice in large quantity and at a rapid rate.[2] Pet Shop uses the ice in various ways to fight.

Horus is so powerful it can generate blocks of ice large enough to crush a car[2] and make the temperature around it drop noticeably[3] despite the hot and dry atmosphere of Egypt. In a humid environment, its real potential is unleashed and the cryokinesis is even more efficient.[1]

This power is often used offensively to create icicles that can be thrown with incredible force toward a target, acting like missiles.[3] The ice is usually generated a decent distance away from Pet Shop but it can also generate shards in his own beak as a close-range attack.[4]

Pet Shop is also shown to generate ice on his talons to presumably augment their dangerousness.[5]