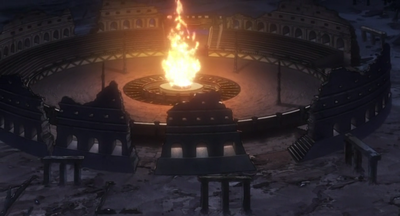 The Skeleton Heel Stone (骸骨の踵石, Gaikotsu no Kakato Ishi) is a large ancient stone arena featured in Battle Tendency. Situated 10 Roman miles from St. Moritz (Switzerland), at the foot of Piz Bernina, it was chosen by Wamuu as the final battleground between him and Joseph Joestar.

In the ancient times, the coliseum was built so the people would look at the stars. It later became an arena for death matches, particularly chariot races, similar to Roman gladiatorial duels.

The arena is an antique stone circle with a large torch in the center and four pillars surrounding it with only one column along the route. Spectators are seated around the arena in a tiered arrangement. The torch is situated in the middle where a track for chariot races surrounds it, measuring up to 960 meters for a single lap.[1] As per tradition, a weapon is attached at the pillars after every lap, in which the warriors race to grab it to their advantage.

Kars and Lisa Lisa agree to bet the Red Stone of Aja in a chariot race at this location, in which Joseph and Wamuu must fight until one dies. Because of the arena's stone tracks, Joseph gains a minor advantage as a head start by blocking Wamuu's chariot wheels with stones. Later on, after a long battle, Joseph's chariot is destroyed along with Wamuu's and they are both forced to fight on the ground. Joseph's cunning and tricks assist him in defeating Wamuu and emerging victorious. 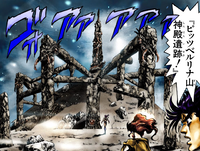 The ruins of Piz Berlina temple

According to Kars, in ancient times, after thanking their gods for their victory, warriors of the arena came to the Piz Berlina Temple to drink the blood of the fallen and feast on their bodies.[2]

After the battle with Wamuu, Kars and Lisa Lisa prepare to fight in the Piz Berlina Ruins. Here, Kars deceives Lisa Lisa and leaves her badly wounded, proceeding to use her as a hostage to wile Joseph. Joseph subsequently manages to save Lisa Lisa and 'defeats' Kars. 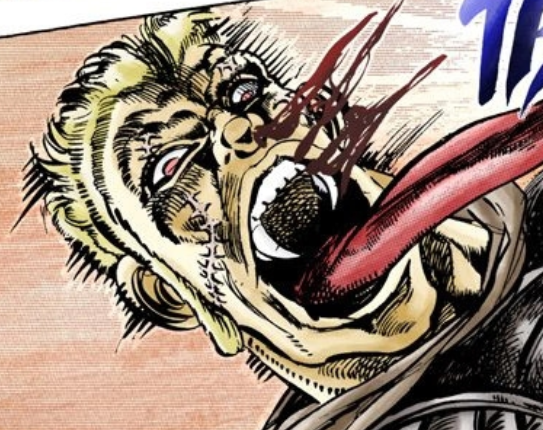