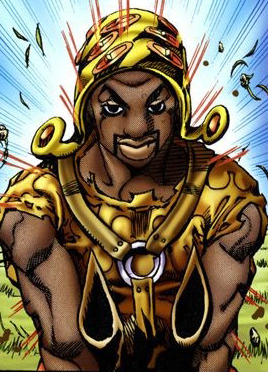 All-Star Battle
“
Pocoloco is the lucky guy after all!
”
—Pocoloco, SBR Chapter 7: Pocoloco and Sandman

Pocoloco joins the Steel Ball Run race inspired by the news given him by a fortune-teller of his peaking luck. Through sheer luck, he becomes one of the fiercest competitors of the race. Pocoloco happens to be a Stand User, whose Hey Ya! exists to cheer him up.

Pocoloco is a black man of average to above-average height and slim or medium build. He sports a thin horseshoe mustache.

The series is known for alternating colors between media, the information presented below may or may not be canon.
Skin(Brown)
Hair(Black)
Eyes(Black)
Outfit
(Yellow hat with orange accessories, yellow shirt, orange pants with yellow knee-pads, blue gloves, gray boots.)

Pocoloco is happy because he is sure of his luck

Pocoloco is cheerful and carefree. He is introduced in repose, counting clouds, before expressing his elation at the recent news of his peaking fortune, as told by a local fortune teller. His elderly co-worker perceives him as idle and naive.

Pocoloco develops incredible faith in his luck, realizing it where acts that would have otherwise been unfortunate end up saving him and lending him improbable advantages during the race. Thus, he often makes expressions of amazement and joy, including variations of the exclamation "UH OH!".

Hey Ya! cheers Pocoloco on, taking full advantage of its user's absurd amount of luck.

Pocoloco is a competent horse rider who, thanks to his luck, becomes a serious competitor in the Steel Ball Run race. During his first appearance, Pocoloco shows an affinity with horses when he is able to guess that a mare is pregnant and at which stage her pregnancy is just by looking at her droppings.[6] While he doesn't have the raw talent or the special skills of other top competitors, Pocoloco has tremendous luck and an absolute confidence, in no small part thanks to Hey Ya!. This gives him the possibility to boldly overcome obstacles in his way and stay a serious competitor throughout the entirety of the race. For instance, he was able to cross a forest by sheer luck and with his eyes closed (which incidentally allowed his horse to navigate through the forest by itself) whereas several other competitors crashed against the branches and fell.[7] 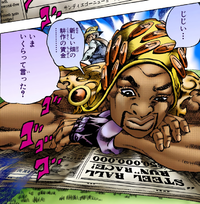 Pocoloco learns about the SBR and decides to try his luck

Pocoloco was born in Georgia in 1869. About one month prior to the Steel Ball Run race, he went down to the city to gamble. After losing, he met a fortune teller who told him that he would be at the highest point in his life for two months. Happy, Pocoloco decided to slack off at work, and his fellow black worker scolded him for this, mentioning that they were given a month to plow a new field in a forest and that he managed to negotiate a pay raise from $1,000 to $1,200. Pocoloco then suddenly remembers reading on a newspaper about the Steel Ball Run and its entry fee. It is implied that Pocoloco completed the job and used his pay to enter the race. 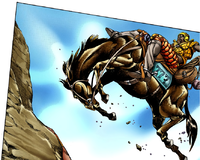 Pocoloco confidently jumps over a cliff to take a shortcut

Excited, Pocoloco cannot sleep the night before the start of the race and sleeps in on the fateful morning. When he wakes up, he nervously looks around the empty camp before learning the truth from a nearby SBR worker. Luckily, the passage of the thousands of horses have smoothed the ground, making his ride extremely comfortable in the first minutes. For a moment, Pocoloco still doubts about his luck. Manure is kicked up onto his face, making Pocoloco think that his luck had ran out, but he then finds a golden coin inside the manure. Seconds later, a female racer wipes manure off her clothes in disgust, exposing her cleavage, and not long after, a wanted criminal wipes the manure off his face, unintentionally creating an impromptu beard that matches the wanted poster nearby and supposedly allowing Pocoloco to denounce him and take the bounty. Pocoloco then follows a group of racers who were misled by Sandman to the edge of a ravine, but, believing in his luck, is undeterred and leaps across the ravine and onto the rock that Sandman was grabbing onto. Just as he is about to slip, Sandman advises him to use the rope at his waist to carry himself and his horse out of danger and Pocoloco is saved again.

This shortcut enables Pocoloco to easily reach the head of the group, where he rides neck to neck with Johnny Joestar, taking time to call his riding "lazy". When Gyro Zeppeli decides to head into the forest to cut down on his riding distance, Pocoloco follows suit, confidently shutting his eyes and riding straight into the forest, believing that his luck will carry him all the way.[5] Soon after Johnny passes him, however, Pocoloco is grazed by a tree branch, which forces him to open his eyes, gasp in fear at a large incoming branch and be slammed off his horse. Still, his luck remains strong, as Pocoloco is instead dragged by his horse, his left boot having been caught in its stirrup, and completely escapes the harm that the higher branches could have caused him. He is then bounced back onto the saddle by the trees that Gyro moved with his steel balls to clear a path and soon catches up to Gyro. Pocoloco then challenges the Napolitan racer.[7]

During the stage, Pocoloco discovers his Stand Hey Ya!

Around the downhill dash segment of the first stage of the race, Pocoloco means to endure the slope and build up his energy. However, his Stand, Hey Ya!, appears and criticizes his idealistic strategy, telling him to "remember the cow", have faith in his luck, and charge forward. Seeing the hand of his Stand sink into his own gives him confidence, and Pocoloco begins by taunting Gyro and charging forward in the downhill dash. However, soon after the downhill dash, he and his horse trip and tumble, though it is revealed that both had landed directly onto a dead cow's hide. Pocoloco then uses it to slide downhill.[8]

Pocoloco abandons the hide and resumes riding his horse with the advantage of having his horse rested somewhat. During the final stretch, Hey Ya! tells Pocoloco to swerve to the left and inadvertently uses a hidden branch as a springboard, seemingly taking the advantage. However, it is Gyro who crosses the finish line first. Then, Gyro is demoted to 21st place for interfering with Sandman's run and Pocoloco is happy to be placed better than Gyro.

The Rest of the Race

Pocoloco continues the Steel Ball Run, being one of the top competitors and always being in the top ten racers of any given stage. He notably finishes first at the Fifth Stage. Near the end of the Sixth Stage, Pocoloco reappears to challenge Johnny Joestar and Gyro Zeppeli. Pocoloco is still encouraged by Hey Ya! and it seems his luck continues to shine as Johnny and Gyro discover that they're heading into a crevice hidden by the snow. However, Johnny and Gyro use their abilities to cross the stage, finishing the stage at the 1st and 2nd place, leaving a shocked Pocoloco behind at the 3rd place.

Nonetheless, Pocoloco manages to finish the race unscathed. During the final stage, Pocoloco places second at this stage and overall. However, Diego Brando disappears without a trace. It is mentioned in JoJolion that he was named winner of the Steel Ball Run race after the 2nd Diego Brando's death.

Pocoloco finishes the race with a total of 398 points.

Pocoloco appears as a random support character in Campaign Mode. He has an extremely low chance to appear after the player completes a fight; should he appear, he'll use his Stand, Hey Ya!, to share some of his luck with the player, restoring their energy gauge completely.

Pocoloco appears as a support in Eyes of Heaven, having one voice line performed by Yasuhiko Kawazu.

In the light novel JORGE JOESTAR, an incarnation of Pocoloco appears named Pocoloco Tripleseven (ポコロコ・トリプルセブン, Pokoroko Toripurusebun). Pocoloco Tripleseven is a scientist, who also becomes an astronaut on the H. G. Wells spaceship. Pocoloco (Universe 37) wields the stand Right Stuff, a group of seven tiny humanoids that will efficiently perform any task Pocoloco asks of them. 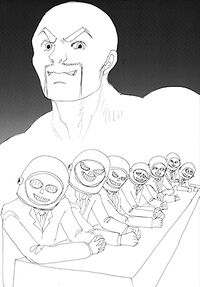 He is bald and wears a beanie cap that says "HAPPY GO LUCKY" and a neck cuff that says "777". He also has a bullseye on the center of his uniform.

Pocoloco is the first to point out that someone from outside is approaching them, about to destroy the spaceship. He asks Enrico Pucci (Universe 37) to wake up Narancia (Universe 37) to see if Narancia can move his submarine away. Pocoloco is amazed at what kind of torture Narancia must have went through to be capable of controlling a massive fleet of submarines at his young age. Pocoloco later points out to the other astronauts that the sand of Goyathlay Soundman (Universe 37) has reached the moon. He suddenly sees a giant balloon with an eyeball out the window and screams.

Pocoloco worries when The Funniest Valentine calls them and can't believe when The Funniest tells them about seven duplicate Giotto probes floating above the moon, when there should only be one. After the call, Funnier Valentine orders Pocoloco to think of a way to have their ship escape from the grasp of The Eyed Balloon's tentacles. Pocoloco's Stand discovers a method and then also locates the explosive device hidden in the spaceship.

After Pocoloco manages to have the tentacles release their grip, he asks Funnier over the ship's loudspeaker whether he's ready to start the engines. However, Funnier ignores him and then suddenly uses his Stand Rear Window to murder Pocoloco with a gunshot.[9]