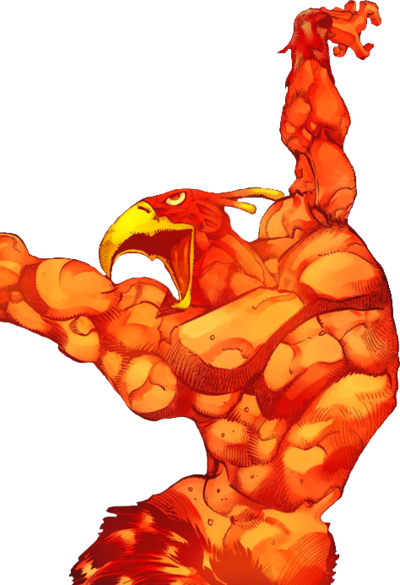 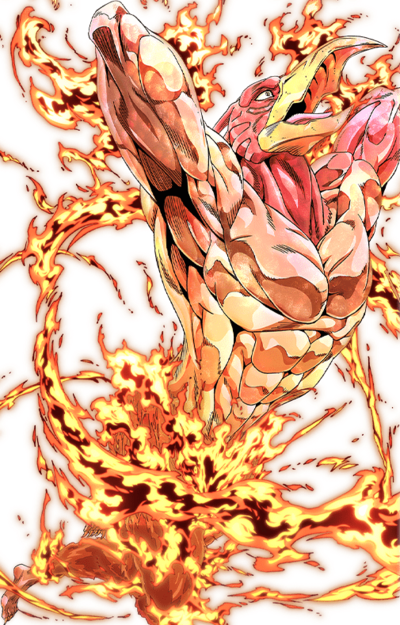 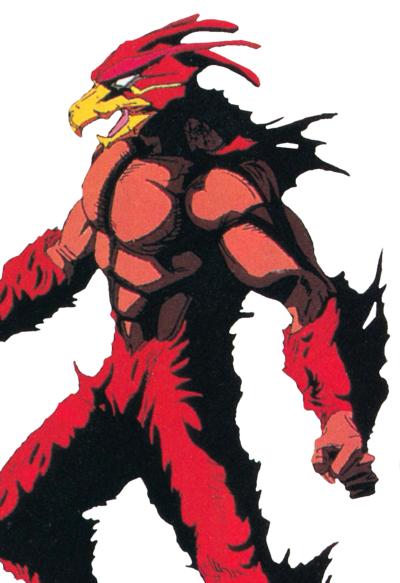 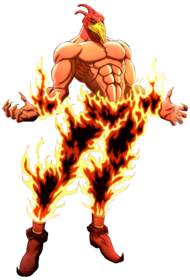 Its design was inspired by the renegade god Horus, from Enki Bilal's Nikopol Trilogy. Magician's Red was given a bird-like head so that the heroes' silhouettes wouldn't look too similar to one another when they're side by side.[1]

It does not show any personality, having a constant aggressive demeanor while listening without fail to its user. However, Avdol claims that his Stand does not forgive anyone, even enemy Stand Users.

Magician's Red is based on the first card in the Major Arcana tarot deck, The Magician, which represents new beginnings and the unification of the physical and spiritual worlds.

Despite their supernatural properties, it was also shown that Magician's Red flames are vulnerable to water and can be extinguished when doused with it.[4]

Magician's Red can fire a few salvos of the Crossfire Hurricane, a spectacular attack that sends forth a barrage of flaming ankhs from its mouth in a great storm.[5] There is a variation simply called "Crossfire" in the Capcom fighting game, where a single flame ankh is shot out as a projectile. In All-Star Battle, Avdol's attack is named Cross Fire Hurricane Variation (・バリエーション, Kurosu Faiyā Harikēn Bariēshon)" as he manipulates the trajectory of his flame ankhs.
Cross Fire Hurricane Special(・・・ Kurosu Faiyā Harikēn Supesharu)

Magician's Red can use its flame to tie his opponent, like a rope. With this, Avdol is even capable of imprisoning his enemy's arms and legs to the wall, as well as their neck. By putting a flame too close to the opponent's face, it eventually burns the oxygen around them to the point of suffocating them.[4]
Life Detector(生物探知機 Seibutsu Tanchi-ki)

Magician's Red can produce a "heat radar", a cruciform mass of psychic flame pointing in six directions: up and down, left and right, forward and backward. The flames are amassed at the tips of the radars and will detect movements, breathing and Stand energy in a 15-meter radius. If the radar detects someone, the flames of the corresponding direction will grow, indicating the location of his heat source based on a compass rose. However, Cream can remain hidden from the radar by virtue of essentially being in another dimension.[7]

Magician's Red was a difficult Stand for Araki to depict due to its perpetual manipulation of fire. He notes that while fire is a common power in other manga and movies, it's only capable of destruction and can "break the balance" when used too loosely. As a result, fire and poison are two abilities that he'd like to avoid using again.[8]