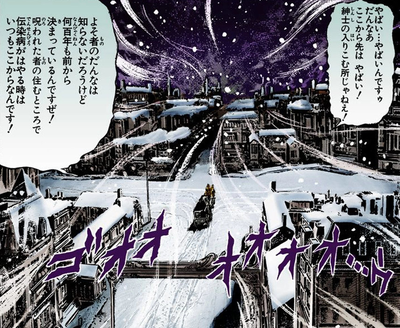 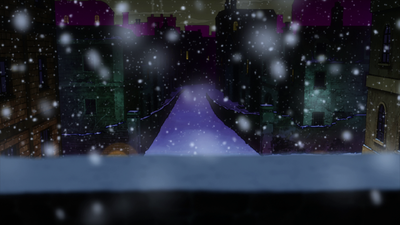 Ogre Street (, Ougā Sutorīto) is a rookery located in the depths of London, featured in Phantom Blood. Jonathan Joestar's journey to find the cure for his father George's illness leads him here, where he meets one of his most faithful allies, Robert E. O. Speedwagon.

Considered to be the most dangerous part of London for over 100 years prior to Phantom Blood, Ogre Street has been deemed a place for the cursed. As stated by Jonathan Joestar's carriage driver, whenever a sickness spreads, it usually hails from here.[1] As such, Jonathan chooses to begin his search for Dio Brando's poison dealer here, desperate to cure his father's own sickness.

For any outsider not familiar with the location, the place is effectively a maze, littered with several dead ends and populated by dangerous buildings and people alike. Even the walls themselves have distorted appearances that make them appear to have faces. Because of the general condition of the turf, its residence consists of criminals and bloodthirsty marauders who will attack outsiders for their valuables. The animals there share the same vicious nature, as Jonathan finds out when he witnesses a cat devouring a dog.

Even the walls look monstrous in Ogre Street.

Soon after Jonathan enters the slums, he encounters a man named Robert E. O. Speedwagon and his two partners. The three immediately try to assault Jonathan without saying a word toward him. After their defeat, Jonathan is quickly surrounded by a larger group of criminals holding weapons. However, thanks to Jonathan holding back on his companions, Speedwagon commands the group to stop, and they oblige; this reaction shows that despite being murderous towards outsiders, the residents of Ogre Street have some form of respect toward each other, or at least toward certain individuals like Speedwagon.[2] Speedwagon leads Jonathan to Wang Chan's shop, where he apprehends the poison seller and obtains an antidote for his father.