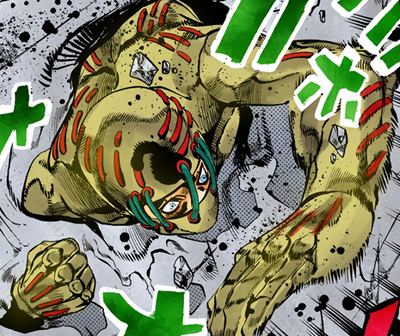 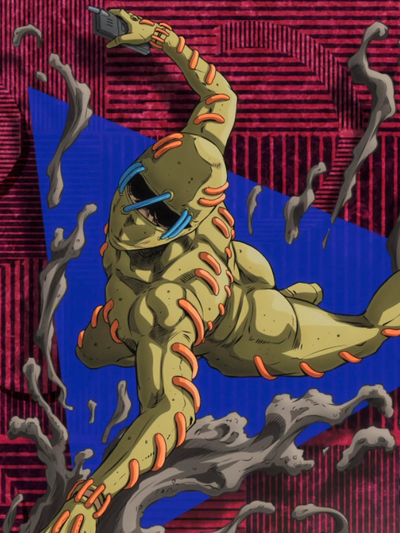 Destructive Power
A
Speed
A
Range
B
Stamina
A
Precision
E
Developmental Potential
C
A
B
C
D
E
A: Very Good
B: Good
C: Average
D: Poor
E: Very Poor
“
So, you can chase us from underground... to the ends of the earth?! You have a terrifying ability... It means we can never escape...
”
—Bruno Bucciarati, Chapter 556: "Green Day" and "Oasis", Part 3

Oasis (オアシス, Oashisu) is the Stand of Secco featured in the fifth part of the JoJo's Bizarre Adventure series, Vento Aureo.

Oasis is a suit that covers Secco and grants him the ability to liquefy the ground.

Oasis is a Stand that nearly entirely covers Secco's body like a wetsuit. Only his eyes, a slit in his upper torso, and wrists are exposed, although the wrists are covered as well in most manga panels. There are vertical stitches spread apart which connect across each exposed area on the suit, with one stitch in between Secco's eyes being diagonal instead.

Oasis's surface is also covered with scales so that it can move through the ground more easily.[1]

Oasis manifests as a suit for Secco to fight in, allowing him to liquefy the ground and brawl at close range with improved physical strength. Oasis forms a deadly duo with Cioccolata's Green Day as Secco can force targets to sink underground, accelerating the growth of Green Day's lethal mold. In-turn, Oasis's nature as a wearable Stand protects Secco from the mold so he can operate with impunity even against mold-infected victims.

To liquefy the ground, Secco must touch the rock; if he loses contact with any chunk of it, it immediately hardens.[3] The liquefied ground has the consistency of mud but also has elastic properties, enabling Oasis to be used in conjunction with Cioccolata's Green Day in order to make victims sink into the ground and have the mold of Green Day rot their flesh. However, Bucciarati does remark that the stone still conserves its solidity despite its liquified state. Secco's power is theorized to have a 10 meters range at most by Mista.[4]

The main use of this ability is to allow Secco to travel underground by swimming through it,[5] keeping him both hidden from view and safe from attacks while allowing him to move at a faster pace than someone could run on the liquefied ground.[4] Secco is unable to see through the ground.[2] Despite this, he is still able to detect enemies through sound, since sound travels faster and easier through liquid than solid objects.[3]

With this power, Secco can also sink whole structures like a set of stairs into the ground.[5] Moreover, he's able to weaponize this ability: by flinging the liquefied ground, Secco is able to turn it into harmful projectiles that injure his enemies, as the liquid ground hardens the instant it breaks contact with Oasis. He mainly uses this by spitting liquid ground from his mouth, keeping his hands free for swimming. Depending on his method, he can spit rocks with enough power to deflect bullets,[4] or spit a load of mud high into the air to rain down as deadly spikes.[3]

Oasis also allows Secco to augment the speed and power of his punches by taking advantage of the liquefied ground's elastic properties. By pushing his elbows into liquefied ground, he's able to rebound his arms off the surface and rapidly spring his fists toward his target as a result. This ability was described by Bucciarati as a "boxer bouncing off the ropes as he punches", enabling Secco to overpower a close-ranged Power-type Stand like Sticky Fingers.[6]

Oasis can also melt the human body if someone stays underground near Secco or through direct contact with him.[7][8]

Oasis enhances Secco's physical abilities, mainly his power and speed. While wearing Oasis, Secco can effortlessly dodge several bullets[4] or even deflect them with his punches.[9] He can kick faster than Sticky Fingers can punch,[6] and he can punch the softened ground to create a shockwave powerful enough to flip several cars and destroy a section of the Colosseum.[7]

Hirohiko Araki designed Oasis based on the idea of swimming through the ground, similarly to how White Album allowed Ghiaccio to skate across the ground.[1]