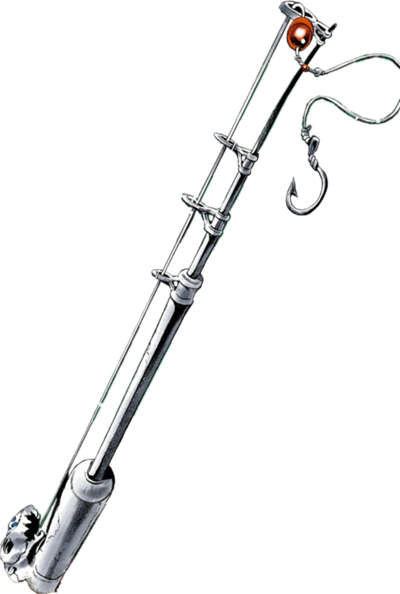 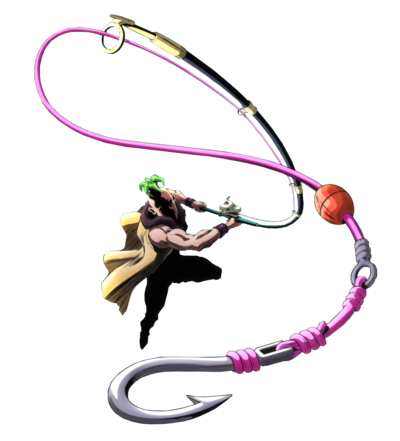 Destructive Power
C
Speed
B
Range
B*
Stamina
C
Precision
C
Developmental Potential
A
A
B
C
D
E
*(Range: The length of the string)
A: Very Good
B: Good
C: Average
D: Poor
E: Very Poor
“
There's nothing you can do but wait until Beach Boy's hook crawls up your arm and snags your heart!
”
—Pesci, Chapter 496: The Grateful Dead, Part 9

Taking the form of a fishing pole with an endless line that Pesci has complete control over, its ability to reflect damage and detect life energy give it useful for both combat and reconnaissance.

The Stand appears as a fishing pole with the words 'BEACH BOY' written on top (omitted in the TV Anime). Its skull-shaped reel represents death.[1]

Pesci summons Beach Boy from the center of his palm.[2]

The series is known for alternating colors between media, the information presented below may or may not be canon.
Rod(Silver and dark gray)
Line(White)
Float(Tan-orange)
Rod(Off-white and black)
Line(White)
Name(Purple)
Rod
(Teal and black with gold segments, white skull)
Line(Pink)
Float(Coral)

Pesci skillfully uses his fishing rod to search for a target through obstacles and, like a fisherman, ensnares them when his hook makes contact. He is then free to reel in his catch[2] or even tear through the whole body by wildly moving the hook,[6] but as an assassin prefers to phase the hook through his catch's body in order to reach a vital organ and cut it from the inside for a sure-fire kill.[7][8]

Should Pesci drop Beach Boy, its abilities will be canceled and the hook and line will disappear.[8]

Beach Boy's hook and line can sense lifeforms, and are accurate enough to tell Pesci the number of people inside a given room[2] and transmit the vibration of a heartbeat.[3] Furthermore, by analyzing the vibrations and strength of the pull on the line,[8] Pesci can accurately guess which body part he is hooking, the catch's weight, their position and their actions to the centimeter.[3][8][10]

Beach Boy's string cannot be destroyed by any usual means, as any damage inflicted to the string will instead affect the one hooked on the string. It is thus impossible to destroy the string once it is hooked into an object or person. This property is a derivation of the line's intangibility: although it will phase through any object, the shock of any attack is transmitted into the catch's body. If the line is attacked by a Stand, the effects of the attacking Stand's ability is will be applied to the hooked victim instead.[8]