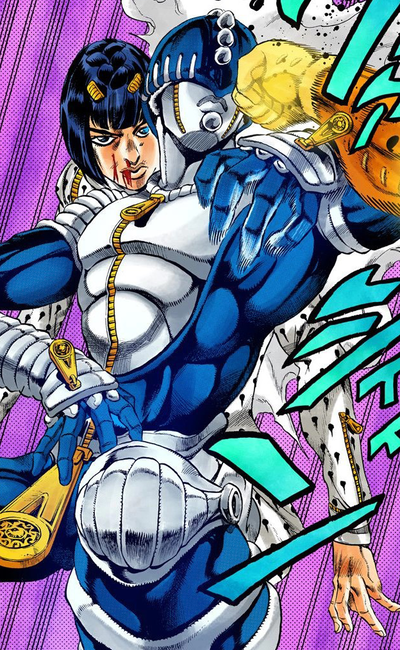 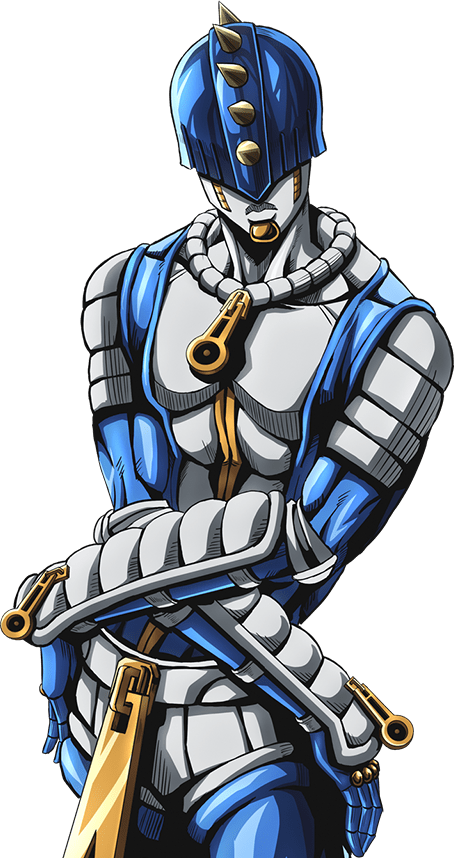 Sticky Fingers is a short-range humanoid Stand that can create zippers on any surface. 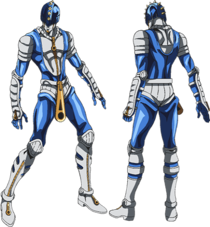 Sticky Fingers is a humanoid Stand that mirrors the height and build of its user, Bucciarati. Covering the upper half of its face, it wears a helmet adorned with a column of short spikes in the center, resembling a mohawk.

It has a dark body suit over its torso, exposing its chest and stomach. Sticky Fingers also wears light padded shoulder pads, elbow pads, forearm guards, knee pads, and shin guards. It has numerous zippers of different sizes all over its body: there is one on each cheek below its helmet, one hangs from the base of its neck and extends down to its abdomen, one is on each forearm guard on top of its wrists, a large zipper is on the center of its waist, and there is one longer zipper on each leg below its knees and extending down to its feet.

Sticky Fingers usually has a serious expression or its mouth matches its user's expression. It tends to have its mouth open while attacking. Its Stand Cry is "ARI, ARI, ARI, ARI" along with its rapid punches, sometimes followed by Bucciarati saying "Arrivederci!" ("Goodbye" in Italian) in its finishing attack.

The main function of Sticky Fingers is creating zippers on what its fist touches, which it can remotely open or close at any time. It has various applications, such as using it to travel through walls or floors, detaching and attaching limbs, and storing objects inside something.[3] The idea of a zipper stand comes from the Sticky Fingers album's cover.[4]

Sticky Fingers can create zippers that cut through the entirety of objects, allowing Bucciarati to dismantle them. With this ability, he can separate enemies into multiple pieces[5] and even perform a cutting attack by detaching something and then canceling the zipper. Bucciarati has control over whether sectioning by zippers inflicts actual damage or not. Non damaging examples include when Bucciarati zipped his head in half to evade an attack,[6] or when he detached Mario Zucchero's head, keeping it alive and conscious.[7] Damaging examples include when Bucciarati split his heart in half to cease its beating,[8] and when he sectioned Pesci in to numerous pieces, which was instantly fatal.[5]

Inversely, Bucciarati is free to attach several things together with his zippers. It allowed him to block King Crimson's arm when it impaled his chest[9] or even attach another's arm to his body.[10] It also enabled Abbacchio to heal his severed hand.

Because the zippers are remotely opened and closed, Bucciarati can take advantage of the zipping itself. He can create long zippers over surfaces and control the zipping to rapidly reposition himself if he holds the zipper's handle, for instance, to move down a lift shaft using the zipper to slow down his descent.[11] Moreover, nearly cutting an object in two then rapidly closing the zipper from a distance creates a makeshift pincer.[12]

If Bucciarati opens a zipper to inside a voluminous object, it actually doesn't show the interior of the object but a dark space in which Bucciarati can put objects like precious items to safely store[13] or himself to hide.[3]

Its ability is inspired by the cover of the Rolling Stones album Sticky Fingers, which featured a functional zipper on the record version.[1][4]

Sticky Fingers' stats receive a slight boost in JOJOVELLER, with its E in Range being upgraded to a C. This change is also reflected in the TV anime adaptation.

The anime's website originally misspelled the name of the Stand as Sutikkī Fingāzu (スティッキー・フィンガーズ) but it was corrected later.[14]