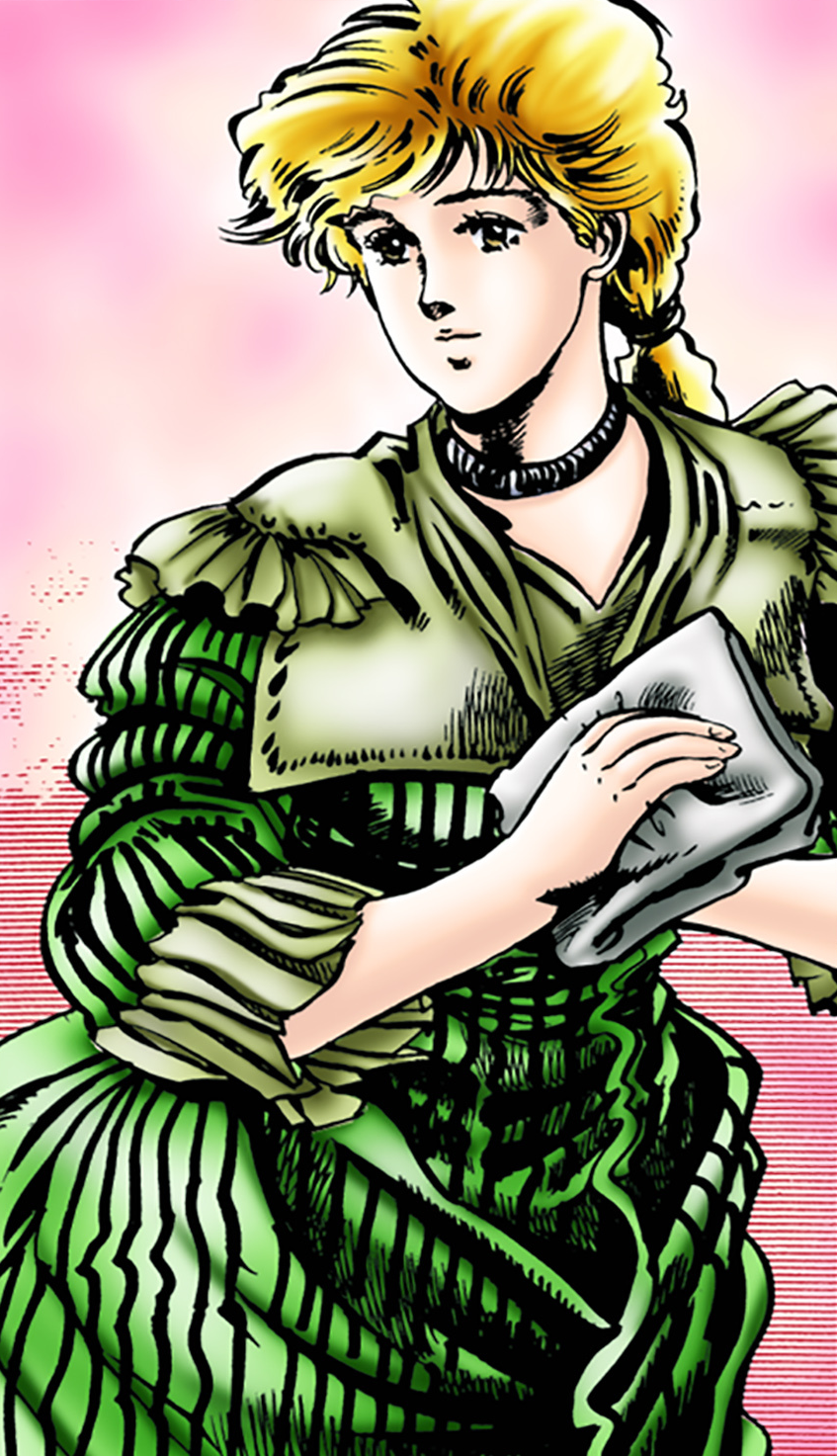 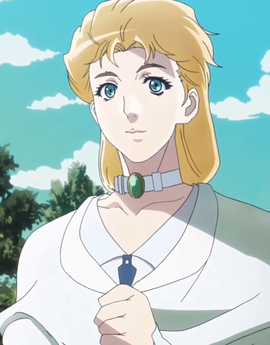 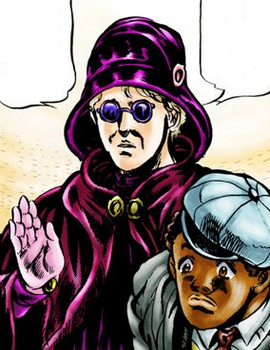 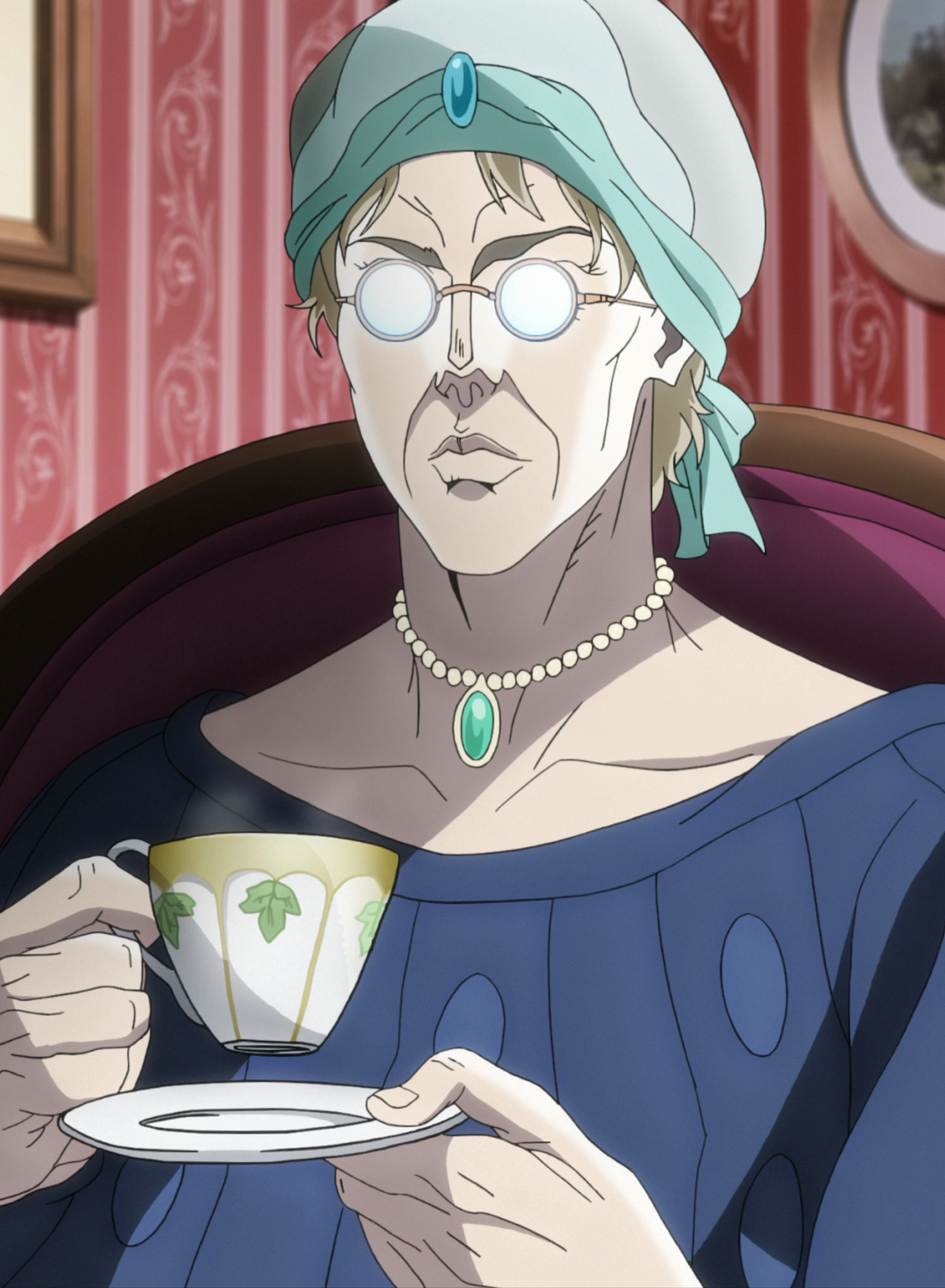 Erina Pendleton (エリナ・ペンドルトン, Erina Pendoruton) is a side character featured in the first part of JoJo's Bizarre Adventure, Phantom Blood, as well as the second part, Battle Tendency.

Erina is introduced as a young girl from Jonathan Joestar's hometown, eventually becoming Jonathan's love interest after he protects her from two bullies. After growing up, she becomes a nurse and the wife of Jonathan.

Known as Erina Joestar (エリナ・ジョースター, Erina Jōsutā) after marriage, she is the mother of George Joestar II, and the grandmother and guardian of Joseph Joestar.

Erina Pendleton is a fair-headed young girl, who keeps her hair in a ponytail and is described as pretty.

During Battle Tendency, Erina has aged, though doesn't have many wrinkles despite being in her 70s, and now wears glasses obscuring her eyes.

“
And now she smiles so cutely, that girl fills Mr. Joestar with love!
”
—Speedwagon about Erina Pendleton, Chapter 17: The Birth of DIO 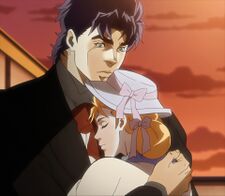 Jonathan and Erina hugging on the ship.

Raised in Victorian England, Erina is a very sweet, caring young woman who is every bit the proper lady. Though polite and gentle in her youth, Erina did show some strength of character: after having her first kiss stolen by Dio Brando she proceeded to wash her mouth without care that the water was from the gutter as an effort to lessen her shame.[2] Nonetheless, she can also have a commanding presence if she wishes. For instance, Speedwagon noted when first meeting her that her eyes were icy cold, making it clear she did not want her treatment of Jonathan to be interrupted.[3]

Erina greatly loved Jonathan throughout her life. Despite being separated from Jonathan for years, Erina took great care of him as soon as she met him again, keeping vigil over him and treating his wounds day and night to the point she'd fall from exhaustion.[3] When Jonathan was mortally wounded, she was ready to die with him and could only be convinced otherwise to save a nearby baby, having great anguish at being separated from the love of her life.[4]

Her twilight years did little to curb that inner fire. Erina is one of the few people capable of tempering her grandson Joseph, while also not betraying her grace and showing deep wisdom. Though significantly more stern, she was still the caring person she had always been. Most notably, in spite of growing up in the racist climate of Victorian England, Erina unhesitatingly befriended Smokey Brown, making her a woman truly ahead of the two prejudiced eras she lived through.

As a young girl, Erina is saved by Jonathan from a pair of bullies who took her doll to play with it. Though Jonathan is beaten by the bullies, leaving his bloodstained handkerchief behind, Erina becomes intrigued by his aspiration to become a gentleman.[5] Soon after Dio Brando enters Jonathan's life, Erina becomes Jonathan's girlfriend and the only one to give Jonathan comfort in light of his adopted brother turning everyone else against him.[6]

However, Dio learns of their romance and decides to ruin Jonathan's chance for love by forcefully taking Erina's first kiss. A humiliated Erina responds by washing her lips from water in a muddy puddle causing a furious Dio to then strike her for such a gesture.[7] Regardless, even after Jonathan fights for her honor once learning what happened, Erina feels too ashamed to see him again.[8] Soon after, she moves with her father to India and Jonathan never saw her since.[9] 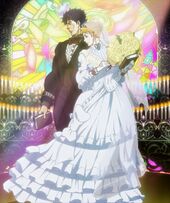 Seven years later, moving back to England and working at the hospital her father is stationed at, Erina sees Jonathan again and tends to his injuries following the events that resulted with the Joestar Mansion burned to the ground. After Jonathan is discharged from the hospital a few days later, Erina remains by his side as they meet Will Anthonio Zeppeli, who uses his Ripple to completely heal Jonathan's body. When Zeppeli reveals that Dio survived the estate burning, Jonathan accepts the offer to learn to use Ripple while deciding to keep a safe distance from Erina for her well being. Once the incident at Windknight's Lot resides with Dio's assumed death, Jonathan returns to Erina and the two marry two weeks later.

Erina at the end of Phantom Blood.

They take a ship to go on their honeymoon to America, but the voyage is cut short by the reappearance of Dio. Erina finds Jonathan as he is fatally wounded by Dio, witnessing her husband use the last of his Ripple to cause the ship to sink. Though Erina intends to die by Jonathan's side, he convinces her to escape with an orphaned infant whose mother has been killed by Dio's actions. Jonathan pushes Erina into Dio's coffin, which shields her from the explosion and acts as a makeshift lifeboat. Ending up near the Canary islands, Erina vowed to tell of her husband's deeds to their unborn child.

Erina, posing for a photo with baby Elizabeth, Speedwagon and Straizo.

After giving birth to George Joestar II, Erina gives the infant she saved to Straizo to raise as his own daughter. Years later, George meets the grown-up Elizabeth, marrying her as they later have a son named Joseph Joestar. But due to George's death by the last of Dio's minions and Elizabeth forced to go into hiding after avenging him, Erina and Speedwagon agree that it would be in Joseph's interests to keep him from the horrors that claimed his grandfather and father. As Joseph later comments, Erina is a strict guardian.

Years later, Erina and Joseph travel to New York on Speedwagon's invitation. Like Joseph, Erina gladly makes Smokey Brown feel welcome as she invites him to a downtown Italian restaurant. On the way, Erina hits Joseph for jokingly insinuating that she and Speedwagon are more than old friends. Once at the restaurant, their dinner is disrupted when a mobster openly making racist comments about Smokey. Erina gives Joseph her permission to teach the man a lesson as long as he does not disrupt the other customers. After the fight, the mobster's companion is revealed to be an associate of Speedwagon who informs them of his death at the hands of Straizo. Looking distressed, Erina comments on how the events that happened 50 years ago seem to be continuing as Joseph assures her he is going nowhere. But Joseph departs for Mexico to investigate the Pillar Men under the pretense of a trip, leaving Erina ignorant of his adventure while telling Speedwagon to not mention anything about it.

Erina on her death bed.

Despite Joseph's apparent death from fighting Kars months later and attending his funeral, Erina is delighted to find Joseph still alive while surprised that he married Suzi Q. In the epilogue, Erina is mentioned to have taught English at a school, and died in 1950 at the age of 81, surrounded by her loved ones.

Erina appears as an old woman (her Part 2 appearance) in Area 3 at the port town, after beating the area's boss. She offers some minor information to the player.

Erina is presented in cutscenes throughout the game that reflects the original story.