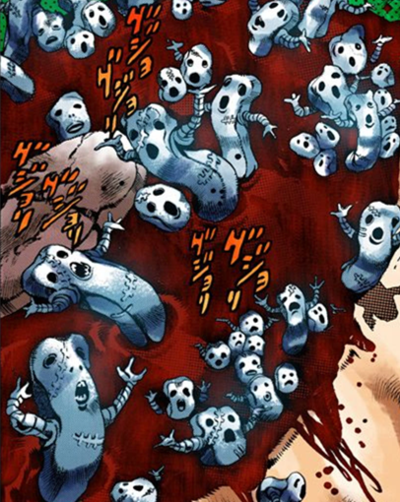 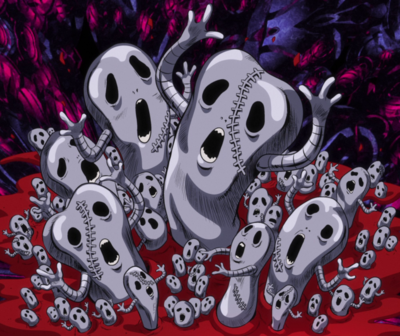 Metallica is a swarm of worm-like Stands that inhabit Risotto Nero's body, granting him the ability to control the iron within and around him. This ability is particularly deadly in combat, as it extends to the iron in the bodies of organisms. 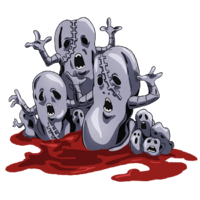 Metallica manifests itself inside Risotto's body as a swarm of small metallic beings with stitches across their bodies. Their mouths are shaped as though they are moaning or screaming. The Stand's design is based on human cells, red blood cells and the hattifatteners from the Moomin series.[1]

The series is known for alternating colors between media, the information presented below may or may not be canon.
Body(Steel Blue)
Body(Gun-metal gray)

Metallica's immobile nature prevents it from attacking on its own, though it can stick onto other Stands.[2] The magnetic power the Stand produces, however, is lethal in the right hands. Risotto is capable of using his magnetic ability to the fullest, particularly during assassinations.

Metallica has the ability to freely manipulate the iron around him using magnetism.[3] The Stand is most effective when used 5 to 10 meters away from Risotto,[4] where it has enough precision to form objects with the iron from another person's body.[4]

Risotto prominently uses his ability to turn the iron inside a target into sharp objects such as razor blades,[5] needles,[6] and scissors[3] in order to internally damage them and drain them of their iron. Metallica can also use the iron inside its user to manipulate severed body parts and create staples to reattach them.[7]

Risotto blends into his surroundings

Metallica is capable of sticking fine particles of iron onto Risotto's body,[7] causing him to reflect light and blend into the scenery behind him.[6] This ability also applies to Risotto's blood, as shown when Risotto is shot by Aerosmith, causing his blood to splatter onto Vinegar Doppio's head and seemingly create a hole in it.[4] Metallica can also manipulate the iron in the environment to form objects, as is shown when he forms knives from the ground and hurls them at Doppio.[7]

The use of iron from within a target's body dramatically diminishes the amount of hemoglobin inside them, reducing the blood's ability to carry oxygen throughout the body.[7] The body will thus suffocate and become unable to function, eventually facing death if the victim doesn't replenish their iron in time.[2] This factor enables Risotto to simply wait for his opponent to die.[4]