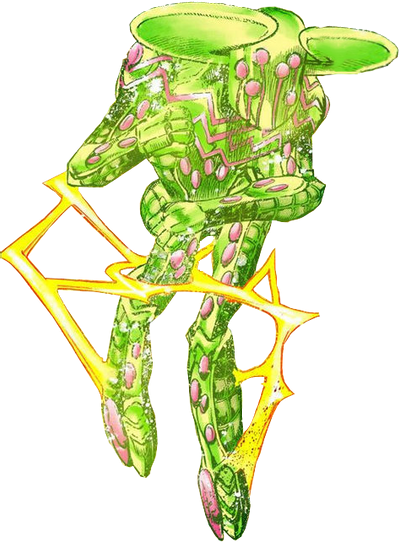 When a Steel Ball user of accumulated experience performs the Zeppeli Family's ultimate throwing technique, a visualization of Spin energy is produced with power comparable to that of a Stand.[1] This ability is capable of bypassing dimensions and accelerating life.[2]

Ball Breaker is a relatively small Stand, roughly the size of the Steel Ball it originates from. It's vaguely humanoid in shape, with a hunched back and hoof-like feet. There are several circles embedded in a random formation on its face with its body studded similarly. Its most prominent feature is a large brim circling the back of its head, ending in two semicircles at the front, which both form golden spirals. Ball Breaker is usually surrounded by a cloud of energy reminiscent of electrostatic discharge. 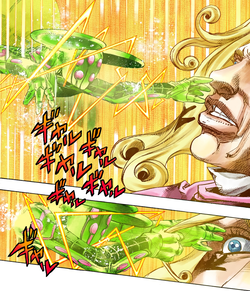 Little is known about Ball Breaker's full capabilities as it only appeared once and the technique was flawed due to an imperfect Steel Ball. It can be assumed that since it is developed from the Golden Spin, Ball Breaker is incredibly powerful.

Ball Breaker embodies the vast quantity of energy collected by a Steel Ball when thrown with Golden Spin (i.e. in sequence with Golden Rectangles held by both horse and rider). As a result, it is capable of miraculous feats like bypassing the dimensional wall of D4C Love Train.[2]

The only specific power Ball Breaker has shown is to induce dramatic senescence in a target, greatly aging them in the zone it touches them. When used on a human being, within seconds they age greatly in dramatic fashion and their Stand will also be affected by the aging.[2][3]