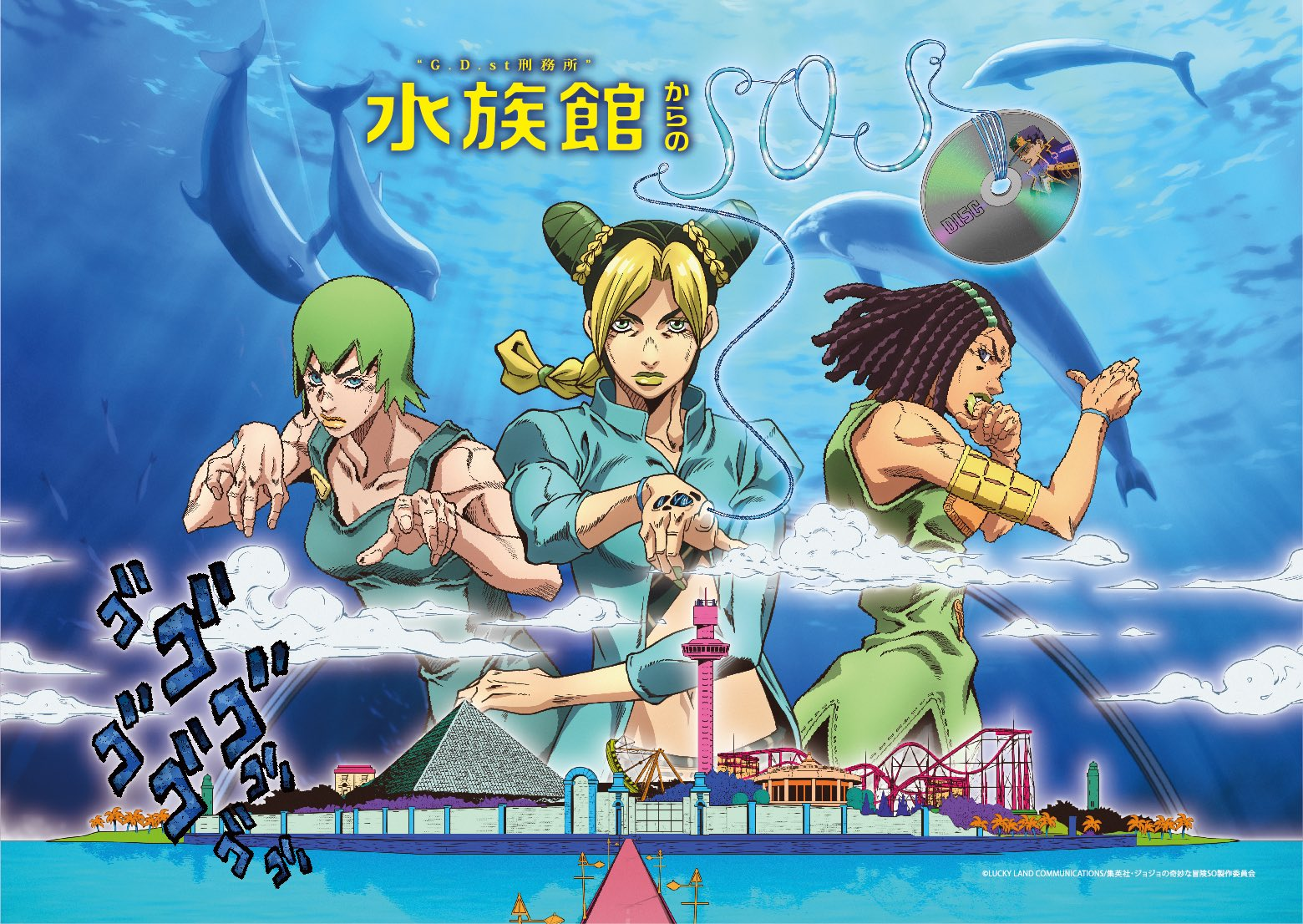 SOS from G.D. st. Jail is a collaboration event between Yokohama Hakkeijima Sea Paradise and JoJo's Bizarre Adventure Stone Ocean featuring new events and goods at the Sea Paradise Aquarium. It begins on October 1 and ends on November 30 2022.[1] If you pre-purchase a ticket set including a "one-day pass" and "Island Exploration Rally" admission then you will receive a original wristband with a prisoner's number (1 randomly given out of 9 types).

The story of the event involves the visitor being an agent of the Speedwagon Foundation disguising themselves as a prisoner of Green Dolphin Street Jail in order to infiltrate the facility and assist Jolyne and friends in finding Jotaro's memory DISC.

The event features new activities and goods for visitors to enjoy. A stamp rally (1,300 yen per person) will take place within the Aquarium where participants must complete missions in order to acquire stamps and keywords. If all stamps are collected and a participant reaches the end, they will receive a novelty DISC of Jotaro's memory. In addition, those who guess the secret card from the cards distributed as a goal bonus (1 randomly given out of 9 types) will receive a special acrylic stand to store Jotaro's DISC.

A special exhibit named "JoJo and Strange Creatures" will be featured at the event. A large collection of "strange creatures" are featured in this exhibit including the Spotted Poison Dart Frog and the Barbados Giant Crab. The ecology and characteristics of the animals on display are presented with stand parameters such as "speed", "destructive power", and "precision movement".

The "Sea Animal Show" show has been altered to fit the event's theme. The new show premise has the Penguin's Memory DISC, which was scheduled to appear, having been stolen by Whitesnake. The trainers and animals then work together to search for the Memory DISC.

Art of the Stone Ocean cast appears on the "Merry-Go-Round" attraction and "Dolphin Fantasy" in the aquarium. Additionally, at the "Carnival House" and "Western Game House", games related to Stone Ocean will be featured. Customers who spend 500 yen or more on these event games will receive a random postcard (1 out of 4 types).

New event food items will be available during the event. Character image soft drinks featuring Jolyne, Ermes and F.F. (650 yen each) and a Stone Free parfait (650 yen). For each food collaboration item purchase, a random "coloring coaster" (1 out of 5 types) will be given out.