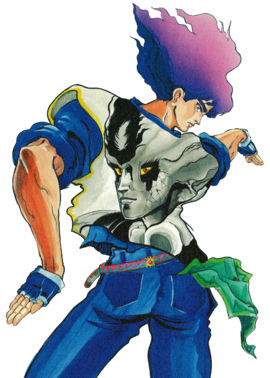 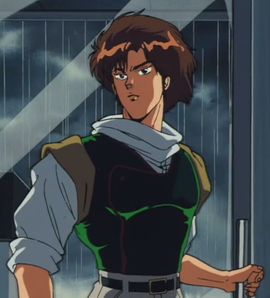 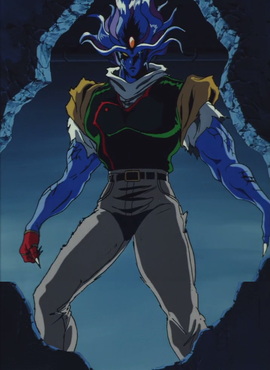 A teenager, Ikuro is kidnapped and transformed into the bioweapon "Baoh" by the Dress Organization.

Ikuro is notable for being the only non-JoJo character featured in the 2013 fighting game JoJo's Bizarre Adventure: All Star Battle.

Ikuro is a teenage male of average height and medium build. He has full-bodied hair of medium tone.

As Baoh, the bio-weapon, Ikuro's skin takes on a bluish hue. The region surrounding his eyes is cracked, as though a shell, revealing a dark or shadowy interior, while his eyes shine out. His hair is swapped for a flowing mass of long strands of what appears to be flesh; while the height of his forehead is embedded a vertical oval emanating light, surrounded by black.

The series is known for alternating colors between media, the information presented below may or may not be canon.
(Ikuro Hashizawa)

Due to his amnesia, Ikuro knows very little about his past.

He is a rather friendly individual, but he is willing to do illegal things to keep himself alive, such as stealing a person's bike. He has a strong bond with Sumire and was willing to risk his life to save her.

As a Baoh, he is extremely violent and amoral, willing to kill whoever or whatever threatens him.

When Ikuro's body is attacked (such as during his near death at the hands of Number 22), it transforms by means of the Baoh Armed Phenomenon (バオー, Baō Āmudo Fenomenon), covering its body in a protective armor that granting the body superhuman strength and healing, which he can also use to heal others. As a Baoh, Ikuro displays other abilities.

Ikuro and his parents were heavily injured during a car accident and taken to the hospital six months before the events of Baoh. Unfortunately, the doctor was linked to Dress, an evil organization of weapons developers looking for guinea pigs at the time. Dr. Kasuminome callously killed Ikuro's parents under his eyes and took him away to inject the Baoh parasite inside of him.

After being injected with the Baoh parasite, Ikuro is contained in a tank and transported on a train. However, a young psychic named Sumire escapes her room and in trying to escape, opens Iluro's tank. A guard tries to capture him but Ikuro crushes his arm and leaps out of the train. He grabs the power lines but also survives the shock. Later, Ikuro and Sumire try to bond with each other, but a knife wielding assassin named Number 22 stabs the former, forcing the duo to steal a motorbike and flee. They attempt to refuel at a gas station bu N.22 appears again, slicing Ikuro's throat. But, it only awakens Baoh, who dissolves N.22 with his touch before turning back into a human. Later, a death squad is already searching for Ikuro and Surime, who are busy betting on horse races to acquire money. The two settle inside an abandoned building, but Ikuro senses that something inside of him is changing. The death squad attacks the duo, but Ikuro transforms again into Baoh, decimating the squad. Unbeknownst to him, he is observed by another assassin. Baoh senses the assassin, who reveals himself as a beastmaster commanding a heavily modfied giant mandrill named Martin. Due to its strength and many weapons hidden inside his body, Martin is more than a match for Baoh. Sumire, having sensed that Ikuro's humanity is still intact inside of Baoh, tries to stop the assassin from controlling Martin, only to be hurt. Enraged, Baoh finally overpowers Martin and kills both the beast and his master, healing and turning back into Ikuro.

Walking through the mountains, Ikuro and Sumire meet an old couple living in the area. They give him shelter and food. But during a moment the old man is isolated, another cyborg assassin emerges, hypnotizing the old man into waiting for midnight and shoot Ikuro in the head with his hunting rifle. At midnight, the old man wakes up and tries to shoot Ikuro, who transforms into Baoh but senses that the old man is not his true enemy. Jumping through the roof, Baoh confronts the cyborg named Dordo who disables all of his sensory organs through chemicals released by a swarm of bats. Thankfully, the old man, who has come to his senses and guided by Surime, shoots down the bats while taking a bullet. Baoh confronts Dordo, who is heavily wounded, but reveals his heavily modified body. He kidnaps Sumire to use her as bait and escapes with a hang glider to one of the Dress headquarters near Sanriku. Ikuro is determined to free Sumire, but risks unleashing the beast inside of him for good.

Going away on a motorcycle given by the couple, Ikuro deems it necessary to learn to control his power first to have a chance to save Sumire. Meanwhile, Kasuminome chastises Dordo for his perceived failure and the danger of letting Baoh time to grow stronger. Meanwhile, Ikuro is forced to save a trapped girl from a speeding train and is pushed into managing to activate his acid touch without fully transforming. Humiliated by his hierarchy, Dordo goes out to snipe Ikuro, but his attempt is foiled thanks to Ikuro activating his super senses and strength to evade the bullets. To lure Baoh, Kasuminome purposefully tortures Sumire whose distress is detected by the weapon. Ikuro is already scaling the seaside cliff leading to a vulnerable side of the facility and, turning into Baoh, rampages through the security staff as well as survives death traps to reach Sumire's room. He is stopped by Walken, whose ability to destroy anything with a thought makes him invincible and his every attacks deadly. Nonetheless, Baoh manages to stab inside Walken's brain by launching one of his arm blades and he finally reaches Sumire.

He is welcomed by a flurry of laser beams, and the attack does not faze Baoh but wounds Sumire. Seeing that Baoh is cornered, Kasuminome prepares to blow up the facility. Meanwhile, Baoh heals the girl with his blood. Walken has woken up, still alive despite his injury, and seeks Baoh for revenge. As the headgear restricting his psychic powers was destroyed by Baoh's attack, the full strength of Walken's abilities causes an earthquake inside the facility. As Sumire awakens, Walken finds them and destroys the floor. All of them, as well as Kasuminome who tried to escape in a pod, find themselves in a cavern. Telling Sumire to flee, Baoh uses one of the lasers to kill Walken for good, unintentionally fatally wounding Kasuminome in the process. The facility then self-destructs, causing the cavern to collapse. 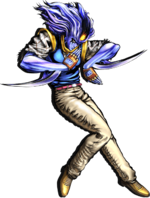 Ikuro appears as Baoh as the final DLC character released for this game; accompanied by a Campaign set centered around him. He also appears in an extra battle in the JoJolion Story Mode chapter.

In the overseas release of the game, he was released in the first public DLC pack on May 14, 2014 along with Lisa Lisa and Part 3 Joseph Joestar, earlier than his Japanese release date.

As Ikuro is unable to speak in his Baoh form (only capable of repeated battle cries of "BARU!" as well as general roars), he is accompanied by the game's narrator calling out the names of his attacks along with descriptive phrases. However, Ikuro will call out the game's name on the title screen in his human voice, and briefly speaks lines, also in his human voice, during his special mirror match intro and during match victories.

As a guest fighter, Ikuro is the only playable All Star Battle character to not return in the next game, Eyes of Heaven.

Ikuro's moveset revolves around Baoh's special abilities. While he has much lower-than-average health, exclusive to Ikuro is the "Baoh Armed Phenomenon" Style. Ikuro has 850 HP.

(Consumes Heart Heat Gauge) ON GROUND
Consuming 1/8th of the Heart Heat Gauge, Ikuro gains super armor during his next ability at the press of the Style button.
Astonishing Leap

after pressing down the left stick for a moment ON GROUND
Ikuro bounds high into the air. This skill can be used to evade attacks or set up attacks from the air.
Baoh Armed Phenomenon
Automatic at a certain level of health.
Grants him health regeneration starting at 75% health, its effect boosted every 25% he loses thereafter.
Scent of Murder
Automatic after certain enemy moves.
This skill goes into effect when Ikuro's opponent activates certain enhancing effects and powered-up states (Rumble Mode, the Pillar Men's Modes, Giorno Giovanna's Gold Experience in Requiem Mode, etc). The time frame at the beginning of Ikuro's guard where a Stylish Dodge may trigger is extended.
Throw
Get the hell out of my way!!
2 ATK buttons at close range or

Ikuro seizes the opponent by the collar and slams them into the ground.
Skills
Baoh Meltedin Palm Phenomenon

ON GROUND
Ikuro lunges forward and reaches out. If he hits the opponent, he'll lift them up by the face and unleash Baoh Meltedin Palm Phenomenon, before slamming them into the ground.
Baoh Reskiniharden Saber Phenomenon

ON GROUND
Ikuro uses Baoh Reskiniharden Saber Phenomenon, with the resulting attack changed depending on the attack button inputted.

ON GROUND
Ikuro jumps into the air with a blade out in an uppercut, before spinning and using Saber Off to launch it as a downward projectile. This move doubles as an anti-air.
Baoh Shooting-Bees Stinger Phenomenon

ON GROUND
Ikuro unleashes a potent blast of electricity surrounding him, shocking the opponent and knocking them into the air. (Comboable through Puttsun Cancel)
Heart Heat Attack / Great Heat Attack
Laser Cannon!

+ 2 ATK Buttons ON GROUND
Ikuro wires a large laser cannon to himself as his feet leave the ground, before firing a narrow red beam capable of hitting at all ranges instantly. The HHA mirrors the way Ikuro defeated the psychic warrior Walken.
Time to cover up that stench!

ON GROUND
Ikuro roars as he charges at the opponent. If he hits, Ikuro picks the opponent up by the face and uses Meltedin Palm Phenomenon, before repeatedly assaulting them with a merciless extended Reskinharden Saber Phenomenon combo attack. Ikuro then finishes by grabbing the opponent by the neck and throwing them overhead, slamming them into the ground hard enough for them to bounce, before frying them with a super charged Break Dark Thunder Phenomenon from his hands. During the GHA, the narrator describes how Baoh identifies his opponent's scent as that of an enemy and that he must be rid of it. During the narrator's final announcement of "Break Dark Thunder Phenomenon!", an echo effect is implemented as well for dramatic effect.