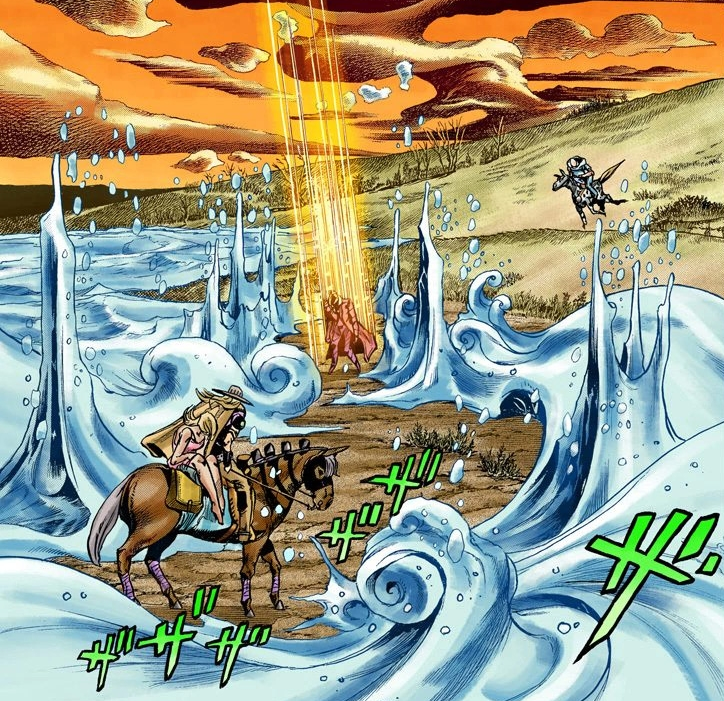 The Philadelphia Coastline (フィラデルフィアの海岸沿い, Firaderufia no Kaigan-zoi) is a location featured in Steel Ball Run. It is the place where Johnny Joestar and Gyro Zeppeli fought against Funny Valentine.

The "Philadelphia Coastline", named as such in JoJo's Bizarre Adventure: All-Star Battle despite the characters having long left Philadelphia and reached New Jersey,[1] is the place where the climactic battle between Johnny Joestar, Gyro Zeppeli and Funny Valentine happens.

Before the events of Steel Ball Run, the place is an unremarkable patch of land bordering the Atlantic Ocean. A gentle slope covered in grass and a few trees scattered on it leads from the interior of the land to the coast. The only landmark in this place is the railroad which connects Philadelphia to New York.

The Philadelphia Coastline is greatly affected by Lucy Steel's Ticket to Ride and Saint's Corpse. Due to their power, the world itself is drawn to Lucy's position, and a bit of the land disappears.[1] Moreover, the Ocean itself is drawn to Lucy and begins flooding a patch of land, although the water stops near Lucy and the dimensional wall created by D4C Love Train, creating an arena of a sort surrounded by small walls of water. Moreover, Tusk ACT4 leaves here a crater after pummelling Funny Valentine into the ground, the crater serving as a focal point into which Valentine is forcibly drawn due to the power of the Golden Spin.[2]

The Philadelphia Coastline appears as a stage in All-Star Battle and All-Star Battle R meant to represent Steel Ball Run, and as a location in Eyes of Heaven's story mode.