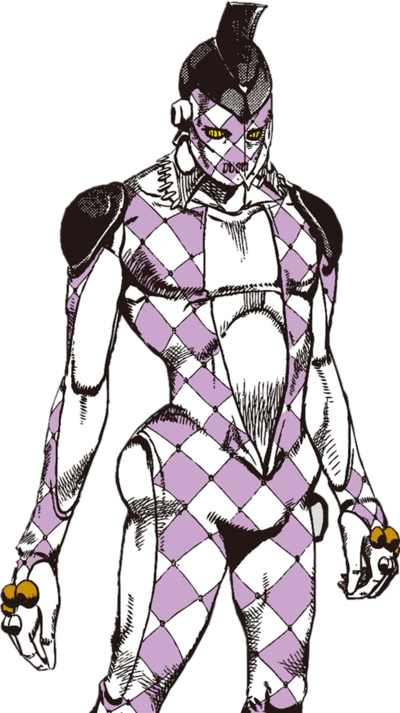 Destructive Power
A
Speed
B
Range
E
Stamina
E
Precision
C
Developmental Potential
?
A
B
C
D
E
A: Very Good
B: Good
C: Average
D: Poor
E: Very Poor
Purple Haze
Purple Haze Distortion
“
Fugo's virus is almost certainly even stronger than before. When he bit the capsule, the viruses multiplying in his mouth attacked each other before they went after him.
”
—Cannolo Murolo, Purple Haze Feedback Chapter 7: luna nova

Purple Haze Distortion (パープル・ヘイズ・ディストーション, Pāpuru Heizu Disutōshon) is the evolved form of the Stand of Pannacotta Fugo, and is featured in the light novel Purple Haze Feedback. Its appearance is similar to Purple Haze but harbors an improved virus.

Purple Haze Distortion is similar to the original in appearance, though its waist cloth, spikes along its back, and boots are gone, and its irises are no longer present. It's about 2 meters in length, covered entirely in a purple and white plaid. It wears a helmet with a translucent visor, and its mouth is loosely sewn together. On each of its fists it has three hemispherical capsules/bulbs that contain viruses. It appears frightful, but often has a strangely nervous face.

When one of the capsules cracks on its fists, a lethal virus is released. This virus can be transmitted via touch or air, but can be sterilized by light. (Several tens of seconds under an indoor light would neutralize it.)  Purple Haze Distortion is able to shoot the bulbs on its fists like a pressurized gun for increased range. The precision of its aim has increased significantly. When the virus enters into the body, the metabolic function of the body is destroyed from the inside out, causing it to melt, killing and completely eradicating the organism within seconds.

Including improved precision, the virus Purple Haze Distortion emits has increased in power and now has the ability to eat other viruses. The drawback is that releasing all the viruses from each bulb may cause them to eat and cancel each other out. The virus will eat any other viruses, including airborne viruses and preexisting viruses in other beings.[1] This allows Fugo to treat himself and allies for viral infections, but opponents may be able to counteract or "distort" the virus by using another virus or infected organism.

Fugo can evolve Purple Haze into Purple Haze Distortion after entering Resolve Mode or after using his Great Heat Attack. While in this mode, the virus released by the Stand deals damage much more rapidly to the opponent. On the other hand, Fugo himself takes insubstantial damage.

The game depicts the differences between Distortion and its original form by the lack of waistcloth, back spikes, boots, and red irises. The metallic armor pieces on Distortion's helmet, shoulders, and knees also appear as black instead of the default blue.