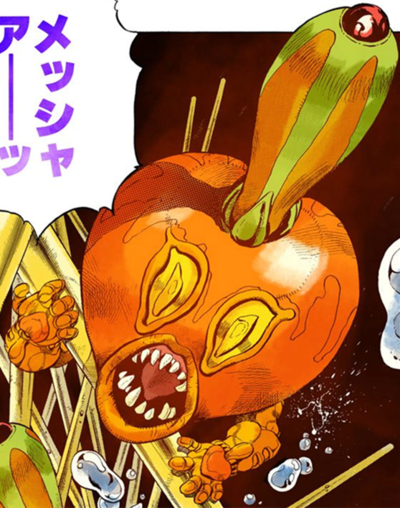 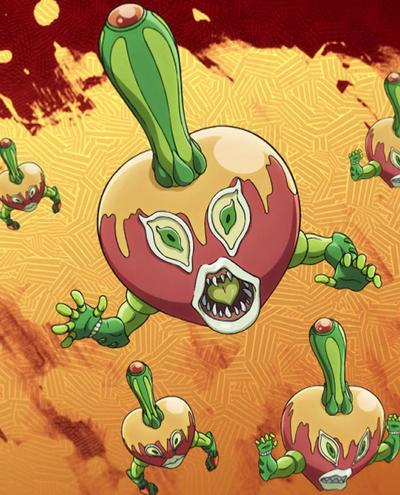 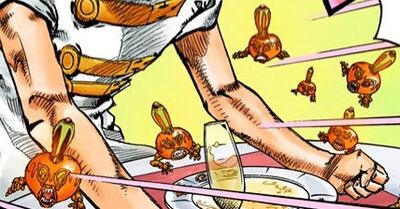 Destructive Power
E
Speed
C
Range
B
Stamina
A
Precision
E
Developmental Potential
C
A
B
C
D
E
A: Very Good
B: Good
C: Average
D: Poor
E: Very Poor
“
I was traveling far and wide in search of my ideal cooking when I first realized I had this fantastical power.
”
—Tonio Trussardi, Chapter 306

Pearl Jam (パール・ジャム, Pāru Jamu) is the Stand of Tonio Trussardi, featured in the fourth part of the JoJo's Bizarre Adventure series, Diamond is Unbreakable.

When mixed with other ingredients, it is capable of healing a person's ailments.

Pearl Jam is a Stand possessing multiple bodies; each appearing as a cross between a tomato and a pearl onion, with arms and a face. The bodies are extremely small (as they need to be ingested to do anything); as well as seemingly invisible whilst bound to Tonio's dishes. Its design is based on a tomato and various Italian vegetables.[2]

When uncovered by Josuke with his stand Crazy Diamond, they appear to express surprise, along with vocalizations like "meshaa!"/"meshii!" and "gii!".

Although shocking to witness, Pearl Jam is an entirely beneficial Stand centered around cooking and curing illnesses and is exclusively used as part of Tonio's restaurant service.

Pearl Jam has the ability to cure ailments through the ingestion of a specific dish. The limits of this ability are unknown, though it can heal incurable illnesses provided the right ingredients are involved.

After Tonio diagnoses specific ailments through palm reading,[3] he prepares a high-class dish and in the process infuses Pearl Jam in it.

It is ambiguous whether Pearl Jam influences the eater's perception of the dish or not between Okuyasu Nijimura's overenthusiastic reactions to each dish and Tonio's inherent skill as cook. However anyone who has tasted a dish of his acknowledged that it was delicious.[3]

Once inside the body, Pearl Jam uses the nutrient contained in the meal and the curative properties of the ingredients to cure whatever ailment is targeted by triggering physiological processes such as tear excretion[3] or tooth growth[4] of unnatural intensity or speed, or forcibly ejecting whatever organ is ill while replacing them. In a more extreme case, Pearl Jam opened Okuyasu's belly up in order to eject his intestines affected by diarrhea.[5] The customer's body then comes back to normal as if nothing had happened, but with the ailment now completely cured.[3] It is notable that a specific dish is compatible with a specific ailment, meaning the eater may be served a dish they are unwilling to eat (for instance Okuyasu detests spicy food but is given pasta made with peppers)[4] and inversely an incompatible eater won't be cured (Josuke doesn't react to the still water of the restaurant).[3]

The quality of the food and ingredients also affects how quickly and how strong the healing ability of his Stand is: the greater the ailment, the more expensive and high quality the ingredients have to be. In a spin-off, Tonio illegally harvests particularly high-class abalones in the hopes that the ingredient cures his lover, Virginia's cancer, something he couldn't cure with ordinary ingredients. However, once he fed her a dish made with the expensive rare abalone with Pearl Jam's abilities, she was fully healed.[6]