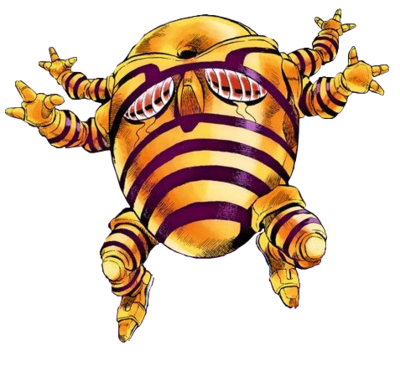 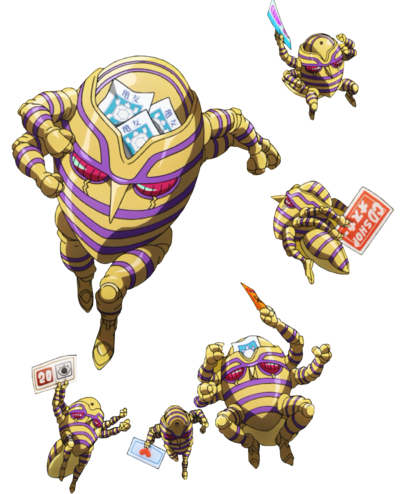 Harvest (ハーヴェスト, Hāvesuto) is the Stand of Shigekiyo "Shigechi" Yangu, featured in the fourth part of the JoJo's Bizarre Adventure series, Diamond is Unbreakable.

It manifests as a colony of small, bee-like imps that Shigechi typically uses to collect items with, such as lost coins, but it also has the power to offensively overwhelm someone due to its sheer strength in numbers. 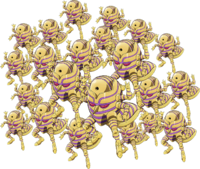 Harvest is a Colony Stand composed of about 500[2] small, heavy units that may act individually or as a group. They are oval-shaped, insect-like creatures with a design based on worker bees, having a large abdomen on their posteriors.[3] Harvest has four articulated arms and two legs, with their hands having three fingers each. A pattern of horizontal stripes covers their body, although the stripes on their head vertically curve downward instead. They have a pointy nose and vertically segmented eyes lacking irises and pupils. Below their eyes are small wavy lines.

The top of Harvest's head has a groove which functions as a pocket, allowing them to store coins, coupons, and other small items within. They can eject the coins and items stored there. The center of their forehead also has a small hole which a stinger can extend out of.

Harvest only speaks the phrase "Found it!" and occasionally laughs "Hee hee!" after finding what it's looking for.

Harvest is a Long-Range Colony Stand that makes up for its low power with its mob, which can easily burrow under a person's clothes and scrape their flesh.[4] Although it is not suitable for performing precise movements,[5] Shigechi is imaginative with Harvest's techniques and utilizes it in various ways, such as collecting coins and other items across Morioh to make money,[6] intoxicating his opponents,[2] traveling faster,[4] and hiding himself by camouflaging.[7]

Using Harvest's abilities, Shigechi was capable of overwhelming Josuke and Okuyasu,[2] as well as temporarily escaping from Yoshikage Kira.[7]

An individual unit of Harvest is fairly weak, although its fists have enough power to punch a correspondingly small hole through human flesh. In combat, Harvest will swarm someone and attack weak points like the eye;[4] Shigechi having also threatened to sever Kira's carotid on one occasion.[8] In addition, Harvest's units are quite fast, able to outpace an athletic runner. Working together, the units can carry Shigechi faster than a man can run and even scale the side of a building like a caterpillar.[4]

Each of Harvest's 500 units can be destroyed with ease, but with little to no effect on Shigechi himself, as the damage is divided by 500.[9] Thus, Shigechi is more resilient than average in a fight unless his own body is targeted.

Harvest has an extremely large range, with its units being able to move through the entirety of Morioh without any issue.[10] Shigechi can command Harvest to sweep Morioh and collect a particular type of item light enough for Harvest to carry it then bring it back to Shigekiyo; the child typically gathers small coins[6] but on Josuke's advice takes on harvesting store coupons which can bring more money.[10]

It has limited use in combat, but Shigechi is able to dismantle objects rapidly thanks to Harvest, enabling him to occasionally take advantage of the environment[4] or rapidly create hiding spots. For example, Harvest gathers several leaves in order to create a bush to hide Shigechi.[7]

Each individual Harvest possesses a stinger with which Shigechi can inject any liquid directly into his opponents' bloodstream, at one point intoxicating Josuke and Okuyasu by injecting alcohol inside them and crippling their fighting ability.[4]

Harvest's aspect to gather things came from the notion for those times when you're collecting coupons, and you wish you had just one more. Araki combined this with the image of bees collecting honey.[3]

Harvest is one of the only Stands computer-generated in the TV anime adaptation of JoJo's Bizarre Adventure due to its sheer quantity. The graphical models were provided by CyberConnect2.[11]