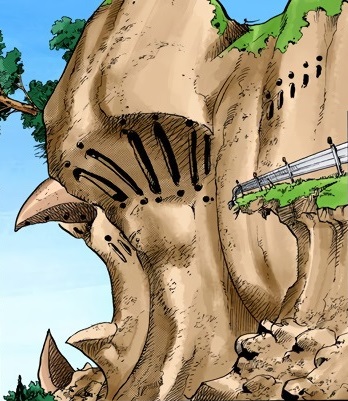 The Wall Eyes (壁の目, Kabe no Me) are a geologic phenomenon featured in JoJolion.

They appeared the night after an earthquake and tsunami on March 11, 2011 shook Morioh; springing from the ground several hundred meters inland, around the town.

The nomenclature of the Wall Eyes was coined by schoolchildren, sticking then with the remainder of the townspeople.[1]

The Wall Eyes stand at an average height of 1–3 meters and a width of 5–8 meters. The "eyes" are located on top of these large protuberances, at 15 meters from the ground. The Walls span across 10 km intervals, isolating Morioh from the outside. They prevent highways, waterways, power and gas lines from passing through their boundaries. They litter the coastline facing towards the sea to protect the town from something coming from the sea.[1]

News reports focus on the disturbing nature of the Walls, offering no explanation to their origin or meaning. Researchers make reference to fault lines, but cannot relate them to any previous phenomena.

The Wall Eyes seem to induce Stand abilities in some of those near them. A Wall Eye fault was located at Ojiro Sasame's childhood home, and he later developed Fun Fun Fun;[2] as a child, Daiya Higashikata fell into a fault where the Wall Eyes later formed, and though she became progressively blinder, she eventually gained a Stand.[3] Josuke Higashikata, Joshu Higashikata, and Yasuho Hirose have also all received deep, human-like bite marks on their bodies since being near the Wall Eyes.[4][5]

The Wall Eyes that sprung up where Josuke Higashikata was found by Yasuho Hirose and Joshu Higashikata is revealed, by Kei Nijimura, to be a location of prior supernatural ability, suggesting that the Wall Eyes do not necessarily cause the effects to happen but are related to them.[6] In this particular spot, which has been used by the Higashikata family for generations, any two objects placed underground will have their aspects merged and switched together. She demonstrates this by burying a lemon and a mikan orange, and then retrieving them and slicing them open to show that some of their sections have switched from one fruit to the other. This exchange is not always equal, as is the result of Josuke after Yoshikage Kira was buried alongside a second person, resulting in Josuke's creation; as a result, Josuke's eyes, tongue, spirit, Stand power, and DNA are a mix between Kira and Josefumi Kujo.[7]

The Wall Eyes appear as a stage in All-Star Battle.