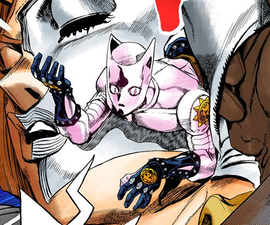 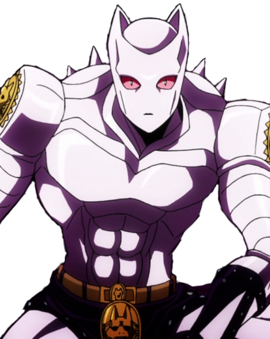 DU Episode 35 - Another One Bites the Dust, Part 1

Destructive Power
B
Speed
B
Range
A
Persistence
A
Precision
D
Developmental Potential
A
A
B
C
D
E
A: Very Good
B: Good
C: Average
D: Poor
E: Very Poor
“
Bites the Dust was born from my absolute desire to not encounter you... Bring it on!
”
—Yoshikage Kira, Chapter 436: Crazy Diamond Is Unbreakable, Part 9

Yoshikage Kira is granted this ability when Yoshihiro Kira's Stand-creating Arrow pierces him a second time.[1] It is born from Kira's desire to prevent anyone from knowing his true identity, as well as his desperation following his impulsive murder of Hayato Kawajiri.[2]

When activated, Killer Queen is separated from Kira and planted into a host; it acts independently of Kira's will, manifesting only when the bomb is triggered. When planted in Hayato, it activates when Kira's identity is revealed audibly or through writing,[3] as well as when other Stand users see the miniature Killer Queen.[4] When this happens, a miniature Killer Queen enters the eye of the person and causes an explosion, killing them.[5] The bomb can detonate multiple people simultaneously.[6]

After killing someone with its power, Bites the Dust creates a temporal loop, rewinding time to roughly one hour prior to the detonation.[7][8] Because Bites the Dust is completely independent and autonomous, Kira is not aware of who is killed by it,[9] nor is he directly aware of whether a time loop has taken place.[10] In fact, the only person who retains the memory of each time loop is Hayato Kawajiri, the host of Bites the Dust.[11][12] All actions performed in the previous time loop become fate, meaning that they are destined to occur as they had happened.[13] Slight deviations may happen,[14] but any person killed by Bites the Dust in a previous time loop is destined to explode at the exact time that they were previously killed, even if they did not re-activate Bites the Dust in the current timeline.[15]

Because the person in whom the bomb is planted must be alive in order to activate the trigger, Bites the Dust will never harm the person with its explosions nor let them be harmed by other forces, demonstrated when the miniature Killer Queen prevented Hayato from slitting his own throat with a knife to prevent anyone else from dying.[16] Ironically, Bites the Dust also prevents the Stand User themselves from harming the bomb's carrier, with the miniature Killer Queen intercepting Kira's fist when he tries to punch Hayato.[17] It also appears to be able to revive that person if they are dead when it is activated, as Hayato was alive once more when Kira planted it in him after impulsively killing him, implying that time was looped to prevent Hayato from dying again the same way.[18]