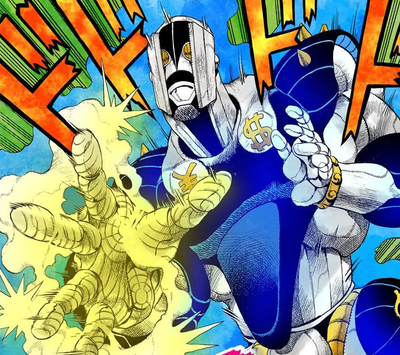 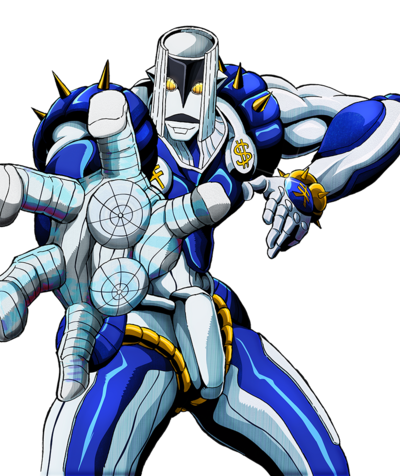 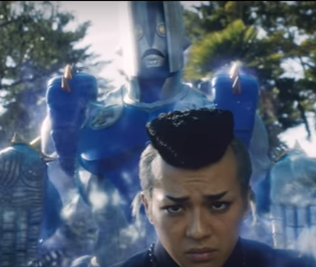 Destructive Power
B
Speed
B
Range
D
Stamina
C
Precision
C
Developmental Potential
C
A
B
C
D
E
A: Very Good
B: Good
C: Average
D: Poor
E: Very Poor
“
A Stand that erases space and teleports objects. That could have been really dangerous... if this guy wasn't such a dumbass.
”
—Josuke about The Hand and its User, Chapter 275: The Nijimura Brothers, Part 2

The Hand (ザ・ハンド（手）, Za Hando) is the Stand of Okuyasu Nijimura featured in the fourth part of the JoJo's Bizarre Adventure series, Diamond is Unbreakable.

It is a muscular, humanoid Stand whose ability is to erase everything its right palm touches.

The Hand appears as a humanoid figure typically in attire similar to football pads, though it has several spikes jutting from them. A towel-like object drapes over its shoulders, with a $ symbol on one end and a ¥ symbol on the other – corresponding with Okuyasu's fashion theme of currency symbols. On each side of the Stand's face are blinders that cover its headlight-shaped eyes and limit its vision, a result of Okuyasu's impulsive demeanor.[2] Its right hand has spiderweb-like lines on the inside, along with two bumps on its palm. However, these features on its right hand were not shown until later chapters.

The Hand is a heavily battle-oriented Stand. Similarly to Crazy Diamond, The Hand is a powerful short-ranged Stand that can easily wrestle with the former, although it is not as fast.

Its unique power of space erasure makes it theoretically one of the strongest Stands of Diamond is Unbreakable, but as Josuke points out,[3] Okuyasu's slow wit dampens its potential.

The Hand erasing one of Stray Cat's bubbles

Anything that The Hand's right palm touches when it does a swiping motion with its arm is erased from this universe, be it physical matters or space itself.[3]

Similar to Cream's, this ability effectively removes whatever is in the Stand's path from existence in accordance with the user's will. Objects that are subjected to the ability appear as if an extremely sharp blade had sliced clean through them.[3] Okuyasu also states that not even he knows where the voided objects go.

Whenever The Hand erases something, the voided space is usually immediately filled and "stitched up" by adjacent space and objects, effectively removing any traces of the removed object's existence.[3] The space elimination and this curious property gives the normally short-ranged Stand substantial ranged capabilities, as it can simply remove the space between itself and a target to bring them closer [3] or have Okuyasu come to them.[4]

Okuyasu likes to refer to this technique as "teleportation".

However, that last property is not always portrayed as it was shown that The Hand swiping through the ground could leave craters.[5]

This power has several weaknesses. Because the elimination is concentrated within The Hand's palm and it must make a swiping motion, it is possible to grab the arm and block it as Crazy Diamond did[3] and for a fast Stand like Red Hot Chili Pepper to evade it.[5]