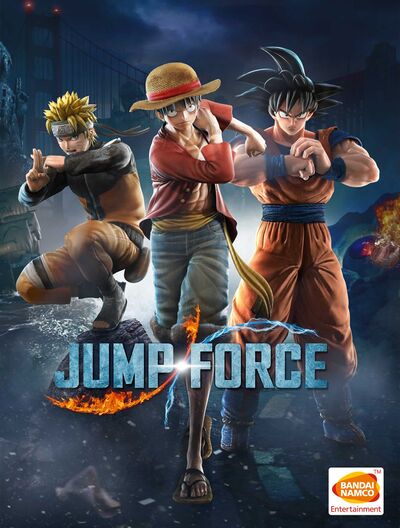 The game released on February 15, 2019 for Windows, PlayStation 4, and Xbox One. The game's ultimate edition provided players with three days of early access and became available on February 12, 2019. A Nintendo Switch version named Jump Force: Deluxe Edition was released in August 28, 2020, including the first season of DLC.

Bandai Namco announced on November 10, 2021 that the game's online services and sales will no longer be available in all regions. Jump Force along with its DLC was delisted from all digital stores as of February 8, 2022. The shutdown of its online servers and virtual currency will happen on August 24, 2022. DLC purchased before the shutdown and offline content will still be available.[2]

When the real world collides with many of the Shonen Jump worlds, humanity is invaded by the "Venoms", an army of mind-controlled villains lead by Kane and Galena. In order to fight back, many heroes are recruited to join the "Jump Force" under the leadership of Director Glover and his A.I. partner Navigator. However, a suspicious figure is attempting to gain the Onyx Book and conquer all worlds.

Jump Force is a 3-on-3 tag team arena fighting game. Players control one character at a time while the others are used as support, with players able to switch between them during battle while sharing a single health bar. Similar to J-Stars Victory Vs, these fighters can move and fight in all directions within a 3D arena. Characters have three special skills and an awakening skill which functions as an ultimate attack. Awakening skills can be performed when the player's awakening gauge is at 50% or more, and the gauge only builds up when the player takes damage. Each stage can also transition to a different location during battle if a character has 50% or more awakening gauge and heavy smashes the other player twice. The match ends when one team depletes the other's health bar.

The game's launch roster features 40 playable characters who come from 16 different series. Eleven additional characters were added in the first season of downloadable content. Three original characters designed by Akira Toriyama called Kane, Galena, and Prometheus are antagonists of story mode. In July 2019, Kane and Galena were released as playable characters. In September, the final boss, Prometheus was made playable as well. Five more characters are planned for season two, for a total of 58 characters including the player's custom Avatar.

Light Yagami with Ryuk from Death Note also appear in the story mode as non-playable characters. Players can create their own character, customizing them with different hairstyles, costumes, and accessories earned through gameplay.[3]