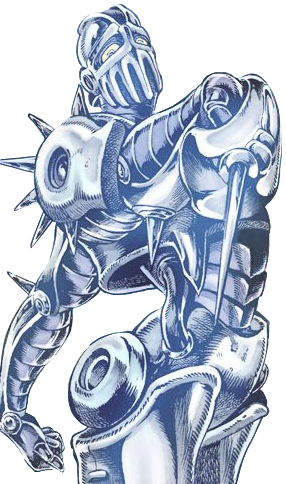 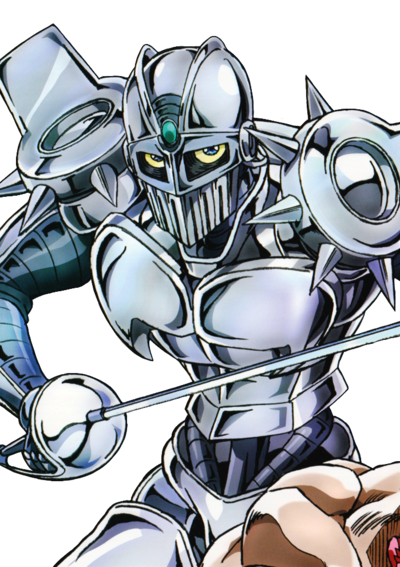 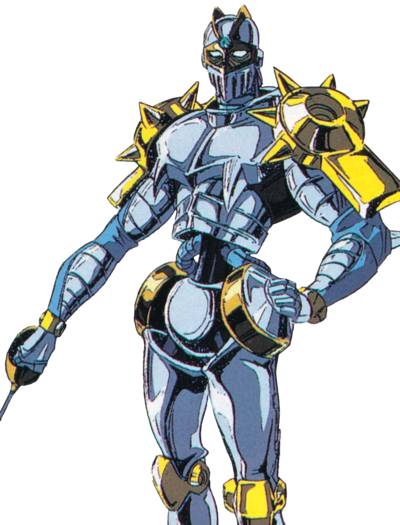 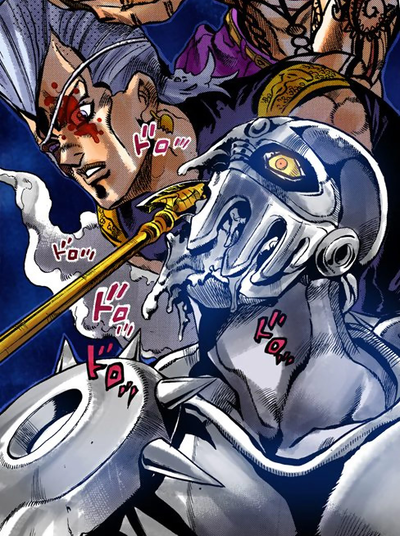 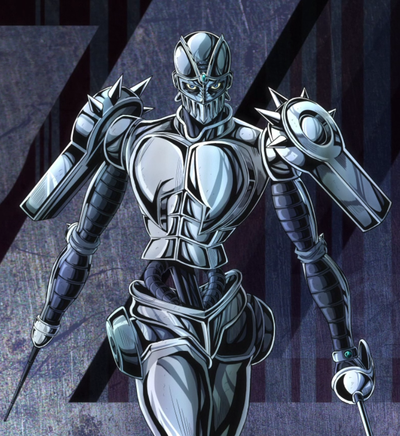 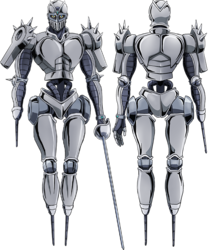 Hirohiko Araki stated that Silver Chariot's design was created as a combination of a robot with European armor.[1] It is a slightly thin, robotic humanoid. It is usually clad in silver, heavy plate armor all over its body, giving it a bulkier look. This armor also has spiked shoulder pads and elbow pads. Silver Chariot has a distinctive helmet with a jewel embedded in the forehead and several pointed down projections protecting its mouth and cheeks.

It almost constantly wields a cup-hilted rapier which closely resembles an épée. However, its rapier can be unequipped if the Stand needs to use both hands.

During Polnareff's fight with Vanilla Ice, Cream annihilates a portion of Silver Chariot's left thigh and its left ring and pinky finger, though these injuries seem to fixed by the time of Part 5. After fighting Diavolo in the late nineties, Silver Chariot loses its legs and right forearm. They are replaced with metal spike-like appendages.[2]

Like most Stands, Silver Chariot is devoid of any will or personality, only showing limited expression through its eyes. It serves Polnareff without question, though it does display a high learning ability, as Polnareff rarely gives it direct orders. Although it's usually silent, Silver Chariot's battle cry is "Hora Hora Hora",[3] and it seems to have had a tendency to shout "Pami" when Polnareff was a child.[4]

Silver Chariot is a dedicated combat-oriented close-range Stand. It represents the tarot card The Chariot, which symbolizes invasion and victory.[5]

It is an incredibly agile Stand, and it usually relies on attacking enemies with barrages of sword slashes and thrusts before the opponent can react. It can also use this agility, along with its sword, to defend and deflect attacks aimed at it or its user. Silver Chariot usually doesn't stray far away from Polnareff, but still has the ability to move several meters away from him to attack.[6] Silver Chariot has the distinct weakness of not being able to see whatever its user cannot see, making it weak if Polnareff is in a blind spot.

Hora Rush is Silver Chariot's Stand rush. With its incredible speed and precision, it is capable of delivering a barrage of slashes and thrusts from its sword, either to incapacitate an enemy or demolish objects.
Armor

Silver Chariot's most unique property is being clad in a set of silver armor that it can unequip.

The armor lowers its speed, but also prevents it from being injured, as Polnareff does not receive the same injuries that the armor does as long as it's donned. The armor is even shown to be capable of withstanding extreme heat without melting,[3] but will be damaged by certain attacks such as Cream's void. This ability's drawback seems to be Polnareff's inability to see through Silver Chariot's eyes. Polnareff is able to shed Silver Chariot's armor in order to reach its top speed (enough for multiple afterimages to appear), but doing so renders his Stand more vulnerable to attack as a trade-off.[9]

If Silver Chariot is ever in a situation with a severe range disadvantage, Polnareff can use its only ranged and secret technique to launch the blade of his sword.[11] This launch is extremely powerful and precise, capable of ricocheting off other objects and striking with enough force to pierce a human body. The major drawback of doing this is that Silver Chariot can only materialize one sword, so Polnareff must retrieve the weapon before being able to attack again.