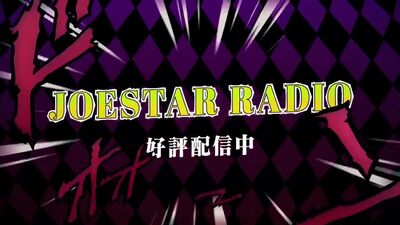 JOESTAR RADIO was a weekly web radio program hosted by the voice actors for each JoJo from the JoJo's Bizarre Adventure TV anime. It served as a countdown prior to the JOESTAR The Inherited Soul event which was held on April 4, 2021. Special guests were featured along with the main hosts, and they looked back on each of the animated JoJo seasons every month.

Comments or messages regarding the JoJo's Bizarre Adventure animation series that were sent to the address [email protected] were read aloud by the hosts on the show in the first and third segments.

The hosts read e-mails sent to the program's e-mail address containing thoughts and questions from viewers about the four seasons of the JoJo anime.

A few topics about JoJo were provided. The hosts chose one and discussed about it.

They compiled best scenes for characters throughout the animation series. Viewers were able to send e-mails discussing their favorite scene for any character, and explain why they thought that scene was great.