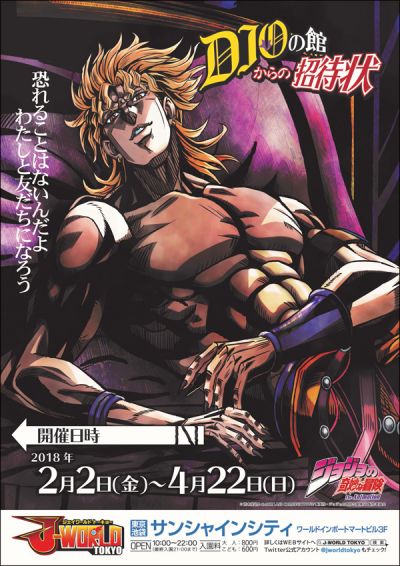 Official Website
Invitation to DIO's Mansion (DIOの館からの招待状, DIO no Yakata kara no Jōtaijō) was a maze attraction at Shueisha's Shonen Jump theme park, J-WORLD Tokyo. The attraction was held from February 2, 2018 to April 22, 2018.

“
One day, during a sightseeing tour of Egypt, you receive a strange invitation letter from DIO, asking you to come serve him. Unable to resist DIO's magical charm, you respond to the invitation and head to his mansion. What destiny awaits you in the dark labyrinth?
”

After giving their "invitation" to a servant, players progressed through a dark maze within groups of 1 to 4. The attraction offered a DIO or Jotaro ending, which could be chosen in advance.[1]

The attraction featured a dice-based mini game called "Rushing! F-MEGA Dice Boost," which reproduced the famous videogame played between Noriaki Kakyoin and Telence T. D'Arby. Each play was 500 yen. All of the prizes were related to Kakyoin being either cushions (two types), can badges (ten types) or postcards (ten types). It also featured a ball lottery type minigame for 500 yen each play that had pouches, acrylic keychains and die-cut stickers as prizes. Additional prizes were later added including a new pillow, photos (two types) of Kakyoin for F-MEGA and a visual mat and acrylic charms (two types) for the ball game.

Goods were be for sale featuring the attraction's key art, and players could stop by the cafe for a pick-me-up off a themed menu—which. This menu included Jotaro Kujo's Oraoraco-La! for 680 yen, DIO's Bed Sandwich for 1,400 yen, “F-MEGA” plate for 1,200 yen, Telence T. D'Arby's "Right? Left? Maybe Oraora !?" Burger for 1,200 yen, Vanilla Ice Pasta Set for 1,280 yen, Jotaro Kujo's Blueberry Cake for 720 yen, DIO Pine & Mango Cake for 720 yen and Iggy's Black Sesame Cake for 750 yen. Stickers (four types) were given out with each purchase of a drink. Later a Kakyoin drink was added called "Let's bet on 'soul'! Noriaki Kakyoin's Hierophant Green Melon Soda for 680 yen and new purchase gift being illustration sheets (seven types).