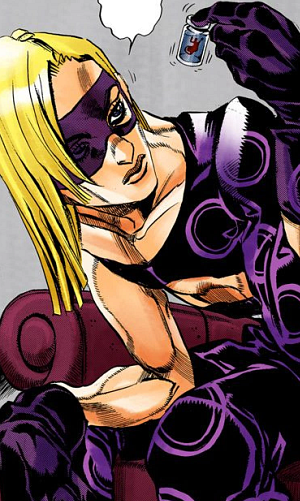 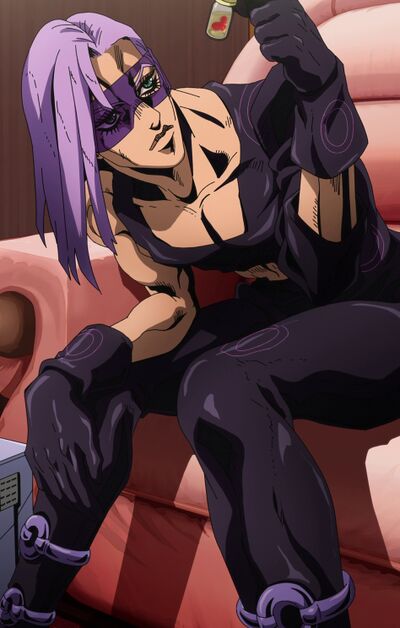 Melone is a member of La Squadra Esecuzioni. After Team Bucciarati is forced to take the road, he attempts to kidnap Trish Una and uses his remote Stand, Baby Face, to battle Giorno Giovanna. 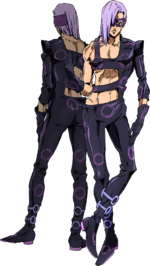 Inspired by Venetian design,[3] Melone's most distinctive feature is his clothes. He wears a dark suit with a concentric circle motif, lacking the right sleeve and a large part of the right side. Melone also wears matching gloves and shoes, as well as a transparent mask covering his right eye. Over his pants, Melone sports two decorative chains around his shins on each leg.

Melone shows himself to be a polite man in most circumstances. Approaching every activity with cold professionalism, he physically inspects his future victims, looking at them more like cattle to breed his Stand than fellow human beings. The TV anime also emphasizes his lustful side, showing him openly licking his lips in delight as he observes a beautiful woman's legs and feet, something his teammates are humorously disturbed by.[4]

Melone is enthusiastic when analyzing a target for his Stand ability. He doesn't care when a woman slaps him hard enough to spurt out blood during his analysis of her, but compliments her slap instead. He also always reacts jovially when circumstances match or exceed his expectations, exclaiming "Di Molto!".[5] Melone pretends that his Stand is in school after it's born by acting in the role of a caring teacher, confident that nothing can defeat it,[6] and praising it when it succeeds in its tasks.[7] Although he becomes nervous when things do not go his way, he still remains cool-headed enough to issue tactical instructions, likely due to the fact that he is not the one facing immediate danger.[8][9]

Melone is one of the least confrontational enemy Stand Users in the series, favoring hit-and-run tactics or laying traps, never reacting with violence to every setback, and even advising his Stand to flee instead of continuing to fight.[10]

Melone is also capable of determining someone's blood type by licking them, as he concludes that Anita belongs to the O blood group after licking her finger.[5]

Melone was a member of La Squadra Esecuzioni, a team of nine assassins working within Passione. However, the team was frustrated they only received compensation for each kills while the rest of the gang was getting rich from the drug trade. One day their teammates Sorbet and Gelato disappeared while they were trying to investigate the Boss's past. They found Gelato choked on a gag in his house, with a piece of paper on which was written the word "punishment". Later, the team received the sectioned body parts of Sorbet encased in formaldehyde, showing the team the power of the Boss. They despaired of ever finding about the Boss. However, they then heard about Trish Una, and thought that she would be the key to discovering the Boss's Stand ability. The team rebelled and began searching for her. Just after Trish was taken in by Pericolo, La Squadra Esecuzioni ransacked Donatella and Trish's apartment in search for clues, missing a crucial picture of Donatella that was taken by the Boss himself.

Bitten by a venomous snake

Melone appears in the PS3 title as an explanatory character in one of the game menus, being the player's eager guide within Option Mode. His signature catchphrase "Di Molto!" plays in battle when a player makes a 15-hit combo or more.

Melone returns in Eyes of Heaven as the guide in Option Mode. Several of his quotes are in the game's Customize mode.

The Mafia members move the bodies out of sight by dropping the bodies in the water between the boats, or by tossing them into the tall grass by the side of the road to the harbor. Nero Nero Island suddenly crashes into the barrier surrounding Morioh and flips upward. Its propulsion causes it to tear through the barrier and lands into Morioh Harbor. Cioccolata and the others start firing bullets and rocket launchers at random civilians and houses in Morioh, attempting to shoot Jorge Joestar as well when he runs by underneath them. The mafia members then jump off the island and head to Budogaoka gymnasium with several weapons.[11]