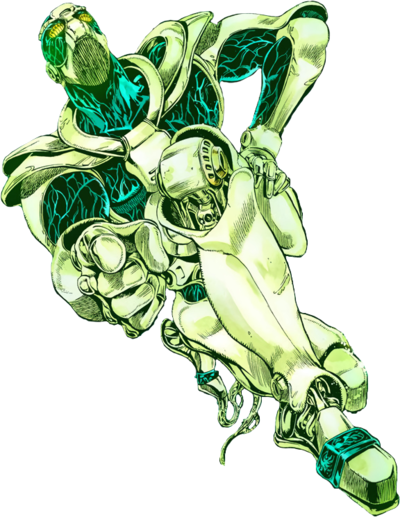 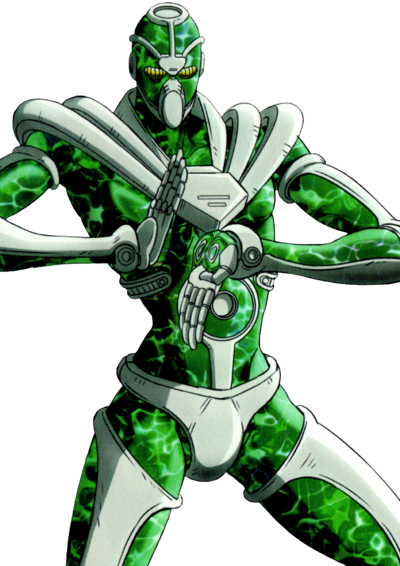 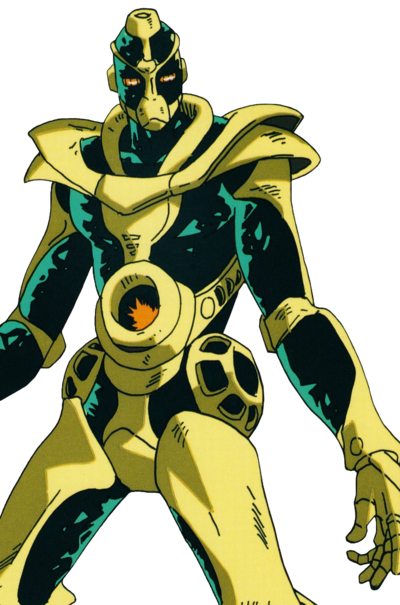 Destructive Power
C
Speed
B
Range
A
Stamina
B
Precision
C
Developmental Potential
D
A
B
C
D
E
A: Very Good
B: Good
C: Average
D: Poor
E: Very Poor
“
Yes, you may drive my Hierophant Green mad... mad from joy, that is. For you see my Stand loves nothing more... than to rip things to shreds!
”
—Noriaki Kakyoin to Tower of Gray, Chapter 123: Tower of Gray 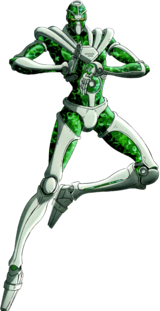 It represents the tarot card, The Hierophant, which symbolizes tradition and conformity.[3]

The Emerald Splash is Hierophant Green's most powerful ability.[2] It gathers energy into its body, causing it to glow bright green, before firing off a large amount of energy which takes the form of emeralds. Before the blast is fired, a green slime-like material (water-like in the anime) is produced by Hierophant Green's hands, a byproduct of the large amount of energy the attack is giving off. The blast's range and shotgun-like dispersion, along with its incredible destructive power and high speed, make Hierophant Green an extremely capable combatant. Interestingly, it seems that though this blast is quite powerful, it doesn't seem taxing on either Kakyoin or Hierophant Green. However, the likes of Star Platinum or even a Vampire can easily block or deviate the attack.[5]
20-Meter Radius Emerald Splash(半径２０ｍエメラルドスプラッシュ Hankei Niju Mētoru Emerarudo Supurasshu)

During the Weekly Shonen Jump serialization of Kakyoin's introductory arc, his Stand was originally named "Hierophant Emerald" (, Haierofanto Emerarudo). The name was changed to Hierophant Green after Kakyoin joined the Joestar Group, and was later corrected entirely in the tankobon release of the aforementioned arc.

Hierophant Green ended up green because Araki wanted some color balance between the allies and enemies. Green reminded him of melons, and he was really into green at the time as he used the color in several illustrations.[9]

Hierophant Green was obtainable for a limited time as an assist in the mobile game Puzzle & Dragons.