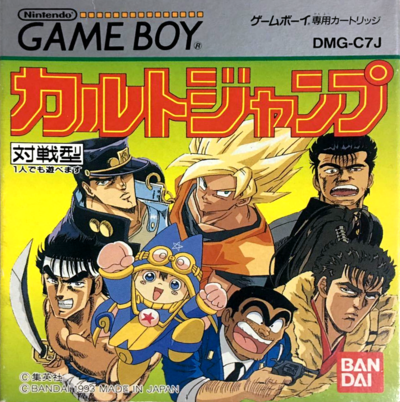 Cult Jump (カルトジャンプ, Karuto Janpu) is an adventure trivia video game developed by Sun L and published by Bandai for the Game Boy. A Japan-only crossover game, it was released on September 10, 1993 and features many popular characters from seven series in Weekly Shonen Jump.

The king of the JUMP world has been imprisoned in a castle far away. It is up to the reader of Shōnen Jump to use all of his knowledge of their published works to beat opponents and rescue the king. Altogether, there are 50 long stages where the player needs to answer the questions posed by the opponents to survive and move on. A password will be displayed after beating each of these stages.