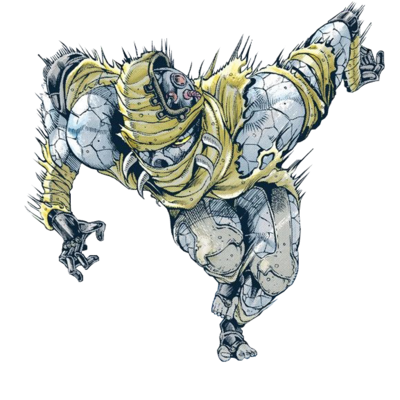 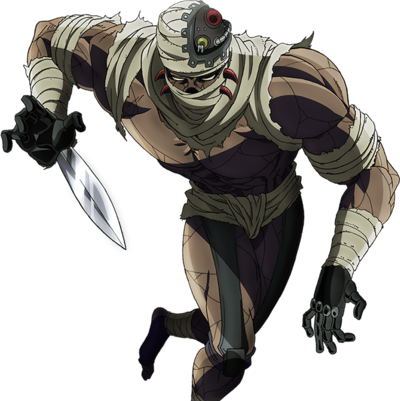 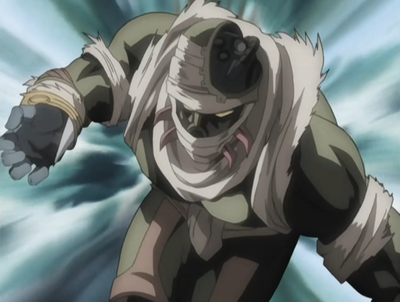 Destructive Power
C
Speed
A
Range
A
Stamina
B
Precision
D
Developmental Potential
D
A
B
C
D
E
A: Very Good
B: Good
C: Average
D: Poor
E: Very Poor
“
I exist only within a mirror and your Silver Chariot is incapable of entering a mirror. That's why...
”
—Hanged Man, Chapter 143

Hanged Man (ハングドマン（吊られた男）, Hangudo Man) is the Stand of J. Geil featured in the third part of the JoJo's Bizarre Adventure series, Stardust Crusaders. Hanged Man is a humanoid Stand with the appearance of a bandaged ghoul. It has the ability to attack its targets from reflective surfaces.

Hanged Man's design reflects that of a mummy with mechanical elements, making it seem less human.[1] Its body is covered in bandages, with half its brain exposed, along with having two right hands as its master does.

It has the ability to produce blades from its wrists to attack. It usually crawls along the ground in reflections instead of typical walking. It has no personality outside of serving its master. It represents the tarot card The Hanged Man which symbolizes different perspectives.

Its true nature is that of a light-based Stand that can only persist inside reflective surfaces but is able to jump from mirror to mirror,[2] giving the illusion that it lives inside them.[3]

Because it attacks from inside mirrors, Hanged Man is a terrifyingly evasive Stand almost impossible to defend oneself against. However, once its secret is unveiled, Hanged Man's predictability can be easily exploited.

When Polnareff first tells how his sister Sherry died, he mentions that J. Geil appeared covered in some sort of protective field. The field prevented the water from hitting him, making the Stand user completely dry even when directly under the rain. This ability is never mentioned again, leaving it unknown if that was another ability from Hanged Man or not. In the anime, J. Geil is briefly seen using this ability, shortly before Hol Horse and Polnareff meet.

Hanged Man can attack from all reflective surfaces

Hanged Man is a Stand that attacks via reflections.

Rather than attacking a person directly, it will appear in a reflective surface and attack their reflection.[4] The person will then bear the results of the attack, seemingly from an invisible assailant.[4] Hanged Man can move through any type of reflecting surface, including human eyes, at the speed of light.[2]

Its weakness is that it can only move between reflective surfaces in a linear pattern and is forced to move to another reflection in front of it if its current location stops reflecting (a mirror being shattered or an eye closing). Hanged Man is vulnerable while in transit between surfaces, and while it does transit quickly, a quick-enough Stand can still hit it, damaging it and its User. This is helped by forcing Hanged Man into a predictable path of transit.[5]

Hanged Man's two right hands can produce knives from its wrists to attack the enemy.[3] These knives are thinner than a razor blade, easily capable of cutting open a chest or splitting a snake into pieces.[6] The Stand uses them to attack the opponent's reflection when inside a reflective surface.

Hirohiko Araki mentions that several enemy Stands, such as Hanged Man, were inspired by various horror movie items; for Hanged Man's case, it was a mummy. It is possible that Hanged Man was inspired by the 1986 episode of Amazing Stories "Mirror, Mirror". In the episode, the protagonist is chased by a phantom that can only be seen in reflective surfaces, ultimately being caught by seeing the creature through someone's eye.[1]