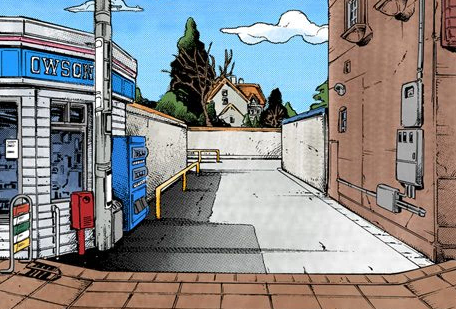 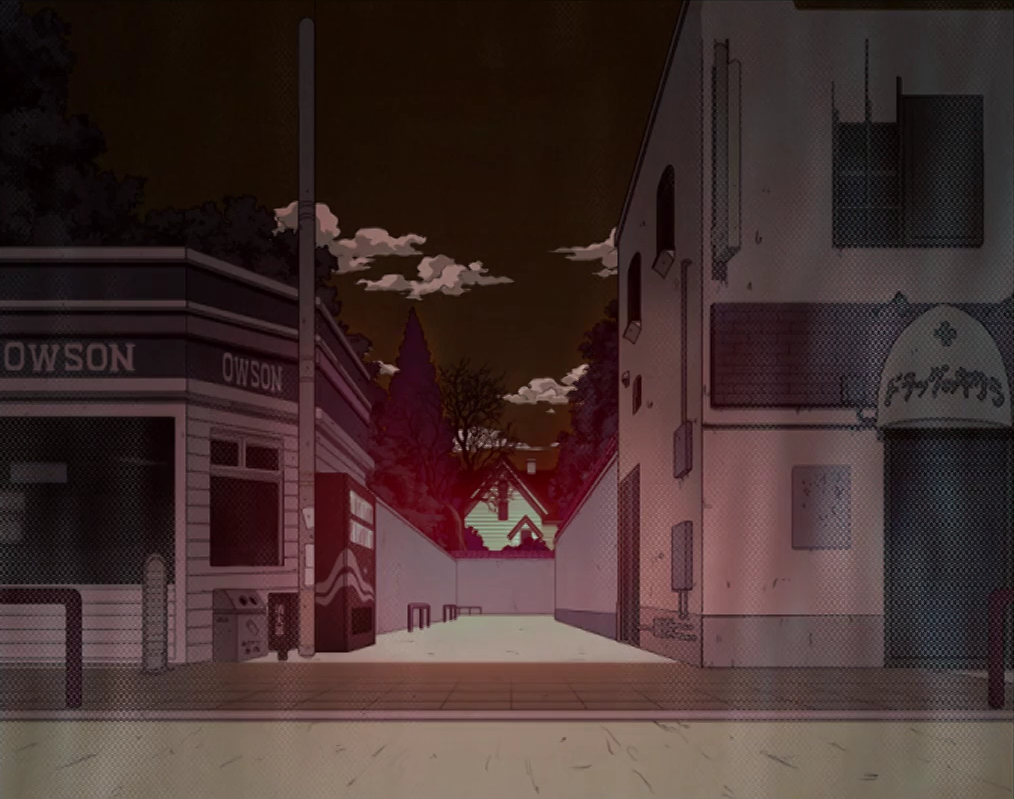 Ghost Girl's Alley (少女の幽霊に会える小道, Shoujo no Yuurei ni Aeru Komichi, literally "The Alley Where You Can Meet a Ghost Girl") is a recurring location featured in Diamond is Unbreakable.

Ghost Girl's Alley is a hidden road in the town of Morioh that serves as the purgatory between life and death. It is also the residence of Reimi Sugimoto and Arnold during the events of Part 4.

Ghost Girl's Alley presents itself as a normally invisible road situated near the side of the Owson grocery, second block in Morioh. To get there, one should take the number 11 bus from Morioh station then get off at the Kotodai shopping district and look for the Owson grocery. Only those attuned to seeing ghosts, like Stand Users and other ghosts, can see it.[1]

Ghost Girl's Alley has the appearance of an ordinary residential road where every house is walled and abandoned. After the entrance road, the way forks in two opposite directions where other houses are visible. Apart from the houses, the only landmarks are a mailbox near which there is fresh dog excrement and an unplugged vending machine.

The alley is unique in that it serves as the border between the world of the living and the afterlife, essentially being a purgatory. Every time someone dies in Morioh, their spirit find themselves into the alley before possibly passing on to the afterlife. However, a dead person with sufficient determination can simply haunt the alley and the area near the Owson store. Moreover, space distorts itself in the alley. If someone walks from into either end of the main street and turn at the inevitable corner, they will find themselves at the fork again; if something also flies high enough into the sky, they will find themselves bumping against the ground. Thus anyone who enters the alley may be trapped. However, the entrance road will always lead out of Ghost Girl's Alley.

In the area between the mailbox and the entrance of the road, if someone looks behind them for whatever reason, countless ghostly hands appearing from nowhere will grab the person, tear them into pieces if they are another ghost, and drag them into an undisclosed place. Stands can also be affected by this phenomenon, and it is noteworthy that they are powerless against the hands. However, even if someone is grabbed, escape is possible as long as that person reaches the exit in any way.

Malicious spirits try to goad people into looking behind them. Their appearance is unknown (only seen as tall shadows trailing targets), but they are able to mimic noises or voices, breathe into someone's ear, and produce a hot and sticky fluid. They are also able to make someone trip if they are not careful. The spirits' motivation for doing such things is unknown.

After one is dragged away by the ghostly hands, their fate is not exactly known. The spin-off Deadman's Questions shows that the spirit of Yoshikage Kira was released sometime afterward as a vagabond. However, Kira's appearance has drastically changed, and his memory has been erased except for his name and his lone desire to live peacefully.

The alley appears as a Situation Finish in the video games All-Star Battle and Eyes of Heaven on the Morioh stage if players are defeated and launched toward the direction of the alley. Reimi announces their fate before the ghostly hands grab the loser.

An alley similar to Ghost Girl's Alley appears in the fifth episode of the TV Drama adaptation of Thus Spoke Kishibe Rohan. The alley is situated under train tracks and has a Hirasaka (平坂) panel that hints that, like the mythological Yomotsu Hirasaka (黄泉比良坂), it connects the alley to the underworld. It is inhabited by a mob of ghostly people who aren't clearly seen, except for their arms who grab anyone who turns back when they approach their victim. Their appearance is triggered by the song Tōryanse, which plays whenever a train passes over the alley and then switches to the Kagome Kagome tune without explanation.