Follow @fairouzzzzzz
“
Jolyne Cujoh is the bravest, most beautiful, strongest, most loving, and most wonderful person I've come across. My admiration for her hasn't changed in 12 years. I'm really happy to be able to go on this bizarre adventure with her, and I'll put my life into my performance so that I can acquire the same "amazingness" as Jolyne through the recording process.
”
—Fairouz Ai

Fairouz Ai (ファイルーズあい, Fairūzu Ai) is a Japanese voice actress and singer who is affiliated with Pro-Fit. On April 4, 2021, it was announced at the JOESTAR The Inherited Soul event that she would be the voice of Jolyne Cujoh in the upcoming JoJo's Bizarre Adventure: Stone Ocean anime.

Fairouz Ai is also known for her work on other anime such as being the voice of Manatsu Natsuumi in Tropical-Rouge! Pretty Cure, Hibiki Sakura in How Heavy Are the Dumbbells You Lift?, Emily Orange in Kandagawa Jet Girls, Eripiyo in If My Favorite Pop Idol Made It to the Budokan, I Would Die, and Takechiyo in Yashahime: Princess Half-Demon.

Fairouz Ai Kadota was born in Tokyo to a Japanese mother and an Egyptian father. Her brother, Gihado Kadota (門田 ギハード, Kadota Gihādo), is an athlete who represents Japan in ice climbing competitions.[3] Fairouz was raised in Egypt and studied at the Cairo Japanese School in Giza from fifth grade of elementary school until graduation. She would later return to Japan during high school.

After graduating from high school, Fairouz did not immediately start a career in voice acting due to her parents' opposition. She first entered a graphic design school but her desire to become a voice actress rekindled during her third year. She worked as a dental assistant for one year to save money and entered the Profit Voice Actor Training Center, graduating in 2019 and debuting as a nameless female citizen in One Punch Man. In the same year, she starred in the role of Hibiki Sakura in the anime How Heavy Are the Dumbbells You Lift?.

In 2020, at the 14th Seiyu Awards, Fairouz Ai won an award in the "New Actress" category for her role as Hibiki Sakura.

Fairouz Ai is fond of drawing, watching horror movies, reading manga such as Prison School, Fist of the North Star, Akagi, and Kaiji, and muscle training. She has a grade 3 certification in Business Skill and a grade 4 certification in Horseback Riding.[4] 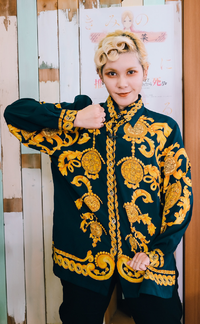 Fairouz has long been a fan of the JoJo's Bizarre Adventure series, particularly Stone Ocean, which she first learned of by reading comments on videos that referenced the series. She liked how dramatic the art was and decided to buy some volumes, which began with the first five volumes of Stone Ocean as she mistakenly thought it was the first story arc due to the reset volume numbers. She couldn't understand anything but wanted to know more about Jolyne, who she thought was cool. After collecting more volumes of JoJo, she eventually had the entire set by her first year of high school.

Fairouz found it tough to adjust in high school but stayed optimistic and motivated herself by thinking that she wants to be like Jolyne. Being half-Egyptian, Fairouz was really happy when she read Stardust Crusaders as she met several people who told her they liked Egypt because of the manga and anime which featured the country. After making friends with other JoJo fans, they called her Avdol so she would joke that she would bring out Magician's Red.

She participated in an online reading session of the manga through Skype group calls and was praised within her online community for her skill in reading the dialogue out loud, leading her to begin to regularly act out scenes from JoJo. The character of Jolyne has even helped her to stay optimistic while job hunting or working, and inspired her dream to appearing in an anime adaptation of the manga and into her career as a a voice actor.

Fairouz says that she affiliated herself with the agency Pro-Fit because the teacher of the training center was Yoku Shioya, who voiced Will Anthonio Zeppeli, and that it would help her appear in the anime adaptation. She received her certification in horseback riding after reading Steel Ball Run which inspired her to learn how to ride a horse.[5]

Commentary
“
"JoJo's Bizarre Adventure" is the reason why I wanted to become a voice actor, and it is a very important work in my life, so when I found out that I would be appearing in it, it felt like a "shock that would even send my Stand flying to the moon"... I was really speechless and I couldn't stop crying because I was so happy that my dream that I had been chasing for 12 years had come true.

I got a lot of courage from seeing Jolyne's strong and beautiful figure, especially when I was a student. So to have the opportunity to play Jolyne, who I love and admire the most, I am really grateful that I can't describe it in words.

Jolyne Cujoh is the bravest, most beautiful, strongest, most loving, and most wonderful person I've come across. My admiration for her hasn't changed in 12 years. I'm really happy to be able to go on this bizarre adventure with her, and I'll put my life into my performance so that I can acquire the same "amazingness" as Jolyne through the recording process.
”
—Fairouz Ai
“
「ジョジョの奇妙な冒険」は私が声優を目指したきっかけであり、私の人生にはなくてはならないとても大切な作品なので、出演させて頂けることを知った時はまさに「スタンドも月までブッ飛ぶこの衝撃」というか…本当に言葉が出てこなくて、12年間追い続けていた夢が叶ったことの喜びで涙が止まりませんでした。