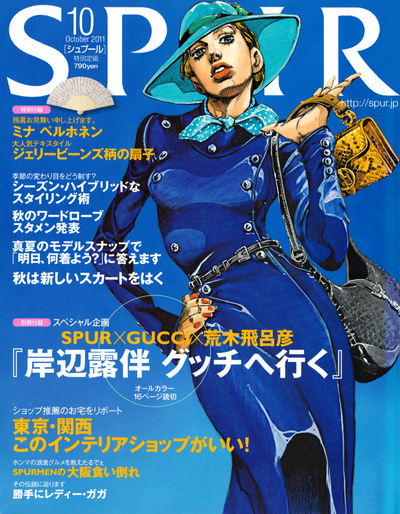 SPUR (シュプール, Shupūru) is a monthly fashion magazine for women, published by Shueisha since 1989. Since 2011, SPUR magazine has made several collaborations and interviews with Hirohiko Araki.

SPUR was first published in 1989. Since its inception, SPUR was classified as a fashion magazine with a strong emphasis on prestigious European brands, with detailed information for European collections in each season and the latest trends.

The typical SPUR issue will address topics such as fashion, fashion accessories beauty, culture, and weddings. A quarter of the pages are dedicated to a tie-up with a specific sponsor. The number of pages varies from 240 to 500 pages depending on the issue. Every year, in the March and September issues, a separate appendix is sold with the magazine to introduce new products. Special issues named "SPUR PINK" and "SPUR white" are also released on an irregular basis. Until 2009, a special issue named "SPUR LUXE" was also released, focusing on high life and high culture, being released on March, June, September and November.

Since 2011, SPUR has collaborated on several occasions with Hirohiko Araki, who is associated with Shueisha too.

Their first known collaboration was in the October 2011 issue for the Gucci X Hirohiko Araki X Spur event, celebrating the 90th anniversary of the Gucci brand. The short story Kishibe Rohan Meets Gucci was released alongside the main issue, which also feature artworks from Araki himself.

In 2012, SPUR edited the JOJOmenon mook for the 25th anniversary of the JoJo's Bizarre Adventure series.[2]

A second collaboration was made on February 2013 with the release of the short story Jolyne, Fly High with GUCCI alongside the issue.[3]

Hirohiko Araki has a special interview with SPUR in the September 2018 issue, in which he discussed about several of his female characters and his ties with fashion.