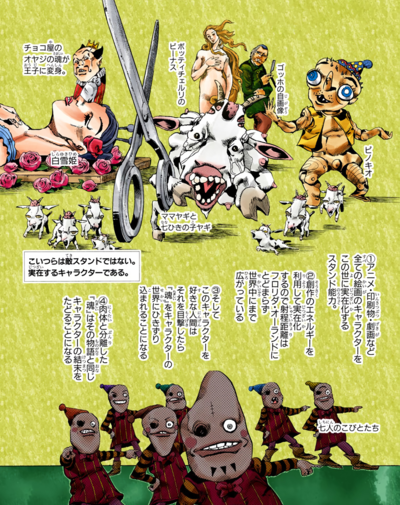 Bohemian Rhapsody (ボヘミアン・ラプソディー (自由人の狂想曲), Bohemian Rapusodī, kanji lit. "Freeman's Fantasy") is the Stand of Ungalo, featured in the sixth part of the JoJo's Bizarre Adventure series, Stone Ocean. Bohemian Rhapsody is a Stand ability that breaks the barrier between fiction and reality, drawing fictional characters into the real world and making people live out specific stories.

The characters brought to life are quite lively, from the jovial dwarfs to the murderous goats, and possess their own personalities. As the dwarfs mention being fans of The Terminator and Star Wars, the fictional characters seem to be aware of separate franchises.

Bohemian Rhapsody is an extremely powerful Stand ability that can affect the entire world and causes untold chaos.

Despite its range and the esoteric nature of its power making it impossible to defend against through conventional means, it can ultimately be defeated by its own power. 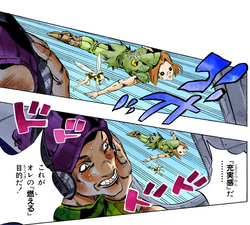 Bohemian Rhapsody is able to bring fictional characters depicted in images into reality through media containing them.[1] Cartoon and anime characters and even works of art and drawings are affected.[2]

The characters are made of the same material they came from and thus cannot easily be destroyed, as shown when the mother goat is simply folded into paper when punched.[3] There is no way to change the course of the story one finds themselves in as they are already written.[4] Running away or hiding from the characters is useless as objects will simply unfold like paper to enable the characters to walk through them[3] or even teleport.[2] Destroying the fictional character that brought a victim into a story is the only way to return the soul back to the body.[5] The images of characters destroyed in reality don't return to the books and papers they were featured. The only example shown in the manga is after Pinocchio was killed by Anasui.[5]

The Stand draws power from the original artist's creativity and passion put into the work, and thus, its range is infinite.[2] One may be immune to this ability if they have no knowledge of the story nor the characters, but this is difficult due to the number of characters brought to life as well as the character's ability to act even based on subconscious recognition and drag unwilling victims into stories, like when Anasui is dragged into the role of the wolf in The Wolf and the Seven Young Kids.[3] Due to this and its worldwide range, it is practically impossible to find and defeat the user.[2]

The countries most heavily affected by the Stand were stated to have been the U.S., Japan, Italy, and France while the Stand was active.[4] 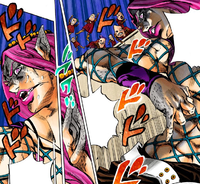 In addition to fictional realization, the victim's body and soul are separated. When one meets a character they like, their soul is dragged into the character's role, taking the appearance and the fate of the character[1] because, as Pinocchio claims, they secretly wish to be able to live their fantasies.[5]

The soul and the body of the victim now act independently as if the person was split. Moreover, the separation is immediate and almost unnoticeable to the victim.[1][5] The soul is visible to only other souls,[1][5] and only the soul can use the person's Stand.[5] Although some can be dragged into a happy story, it is especially dangerous to be dragged into a story where the character dies.[8]

Hirohiko Araki stated that he was only allowed to draw non-copyrighted characters that appear with Bohemian Rhapsody. He originally wanted to have Mickey Mouse fully appear, but his editorial department rejected it so he could only have the tail showing.[9]