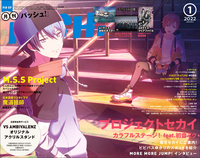 An interview with Fairouz Ai, the Japanese voice actress of Jolyne Cujoh from the JoJo's Bizarre Adventure: Stone Ocean anime. It released on December 9, 2021, in the January 2022 issue of PASH! Magazine.

I can’t even begin to describe how happy, moved and grateful I am.

Fairouz, you’ve said that you’ve always been a fan of the “JoJo’s Bizarre Adventure” series. What do you find most appealing about the story of “Stone Ocean”?

Compared to the previous protagonists, I think the appeal of “Stone Ocean” is that it depicts Jolyne’s mental growth to a greater extent. At first, Jolyne was a whimpering delinquent, but as the story progresses, she keeps growing stronger and stronger. She’s so impressive! I want to be like her!

Also, at the time it was serialized, it was really rare to see a battle manga with a female protagonist. I was totally impressed, thinking “Girls can be this strong too!“. I think it’s a very avant-garde and energetic series in that aspect as well!

Please tell us how you felt when you were chosen to play the role of Jolyne.

I was filled with so much happiness, excitement, and gratitude that no words in the world can describe it. There were many difficult times in my life, but I was so happy that I came across JoJo when I was born, and got to be the closest to Jolyne, whom I love the most in the world. It’s been a dream of mine to be in JoJo for a long time, and it was definitely a difficult path… that I wouldn’t have been able to traverse without some luck.

When the cast was announced, there was a huge response, especially on social media. Were there any messages from fans or reactions from your family and friends that left a particular impression on you?

My friend group of 10 years, who became friends through JoJo, drew an illustration of Jolyne with me and gave me a very nice butterfly brooch as a gift! I also received congratulatory messages from my mother and many other friends and colleagues, which made me realize how blessed I am. “Thank you”… I can’t find any other words to express my gratitude…

I have heart-to-heart conversations with Daisuke Ono, who plays the role of my father and loves his work.

Fairouz, please describe what you think is the appeal and strengths of Jolyne. Is there any new aspect of Jolyne that you have discovered through acting as her, or any point that you have a deeper understanding of now than when you read the manga?

Jolyne’s appeal is her tough mental strength and her sense of purpose that shapes her power! However, after acting as her, I realized that Jolyne wasn’t always strong from the beginning. The final volume left such a strong impression on me that it almost felt like I was in a hurry, like “I have to make her look cool!” The director tried to fix it by telling me “You shouldn’t give the impression of having resolve right in the beginning.”

Are there any other memorable interactions you had with the staff while recording?

When I was allowed to review the dubbing of the second episode, I felt a gap between the Jolyne I imagined and my actual performance I heard, which made me lose confidence and feel depressed. But the series director Kenichi Suzuki said, “It’s okay, everyone was like that at the beginning. As the story progresses, you’re growing with the characters.” Those words saved me.

This work is also the story of father and daughter, Jotaro and Jolyne. While playing as Jolyne, have you ever talked with Daisuke Ono, who played the role of Jotaro?

We can talk about our love for JoJo on the same wavelength, so it’s really fun to talk with him every time we meet!!

Talking about anime original scenes, I said “This scene is so emotional, just like that scene in ***, isn’t it?!” To that, he replied “Emo emo daze”, so I countered with “Emo emo dawa” (laughs). We’ve only met a few times, but we’re already good friends!

Besides Jolyne, there are many other fascinating characters. Which character would you say is your favorite or who you want to pay attention to?

I love Sports Maxx, but I can’t say that out loud because Ermes would probably get mad at me! (laughs)

If you could get a Stand ability, what would you want it to be?

Well, as an anime otaku, I guess I’d have to say “Bohemian Rhapsody“… I won’t say much about it because it would be spoilers, but if you’re a Stand user reading this, then you should be aware of it! Though it’s too late…

Finally, do you have a message for our readers?

To all the fans who are looking forward to “Stone Ocean”, thank you so much for always piling up enthusiasm about it and loving it! I truly love “JoJo’s Bizarre Adventure”, so if this season can be a chance for people who haven’t seen it to get to know it, hopefully you enjoy it~

Right now I can’t help but feel lucky from the bottom of my heart and laugh…! I can’t hold it in~