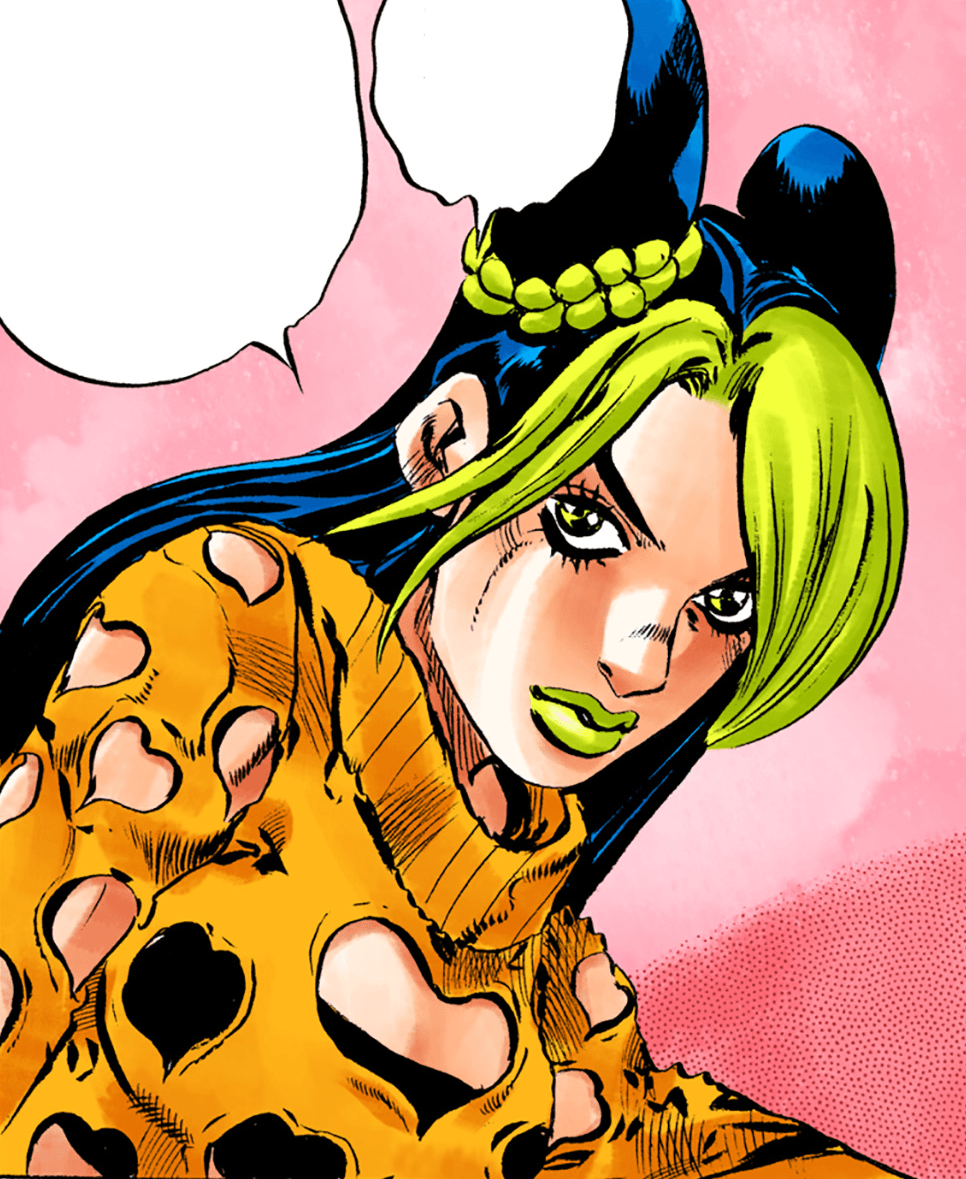 Irene (アイリン, Airin) is a tertiary, but key character featured in the sixth part of the JoJo's Bizarre Adventure series, Stone Ocean.

Resembling Jolyne Cujoh, she meets Emporio when Enrico Pucci's reset of the universe fails and reverts.

Irene is a young woman bearing many striking similarities to Jolyne Cujoh as well as the star birthmark on her shoulder like the rest of the Joestar family. Unlike Jolyne, she has longer hair, and a softer outfit consisting of a light, turtle-necked sweater cut above the navel, patterned by several heart-shaped gaps or holes, bandeau bra with a spiderweb pattern and a crest. She also no longer has her counterpart's butterfly tattoo.

In her brief introduction, Irene appears to be friendly and rather carefree, having offered a ride she shares with her boyfriend, Anakiss, to multiple strangers (Emporio and an unnamed woman); along with asking Anakiss to give a hitchhiker a ride despite his objections.

While time was speeding up due to Made in Heaven, Emporio Alnino defeated Pucci before the universe reset could complete and reverted the universe to the original one but with an altered future. Thus, the souls of Jolyne, her father, and her deceased allies were reborn but with different memories.[2] Jolyne is now named Irene and Anakiss is her boyfriend.

Irene and Anakiss are at a gas station next to Green Dolphin Street Prison when it starts raining. While sitting in the car, Irene sees Emporio and offers to give him a ride. She reveals that she and Anakiss are on their way to see her father to get his approval for their marriage. Anakiss also offers to give a ride to the reincarnated Ermes Costello in exchange for gas and food money. Emporio trembles upon seeing people resemble his deceased friends so Irene gets out of the car and comforts him, taking off her jacket to wrap it around a sobbing Emporio. Emporio notices the Joestar Birthmark on Irene's shoulder and tells her his name, with tears in his eyes. The group drives off, but not before Irene tells Anakiss to stop the car to give a ride to a hitchhiker walking on the side of the road.

Like the previous game, Irene's lines are referenced in the game and her outfit appears as one of Jolyne's alternate costumes.