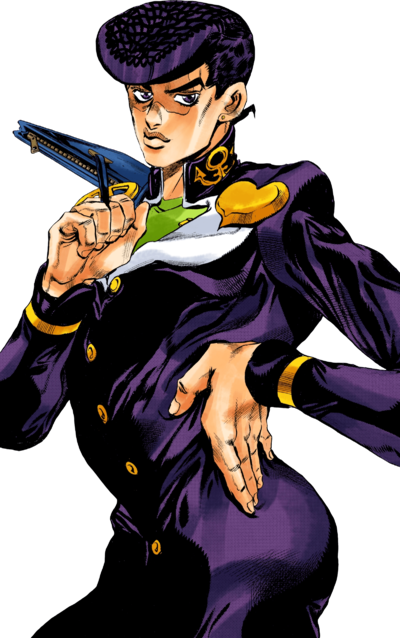 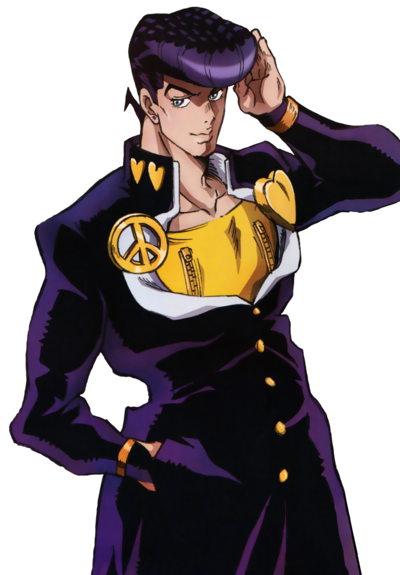 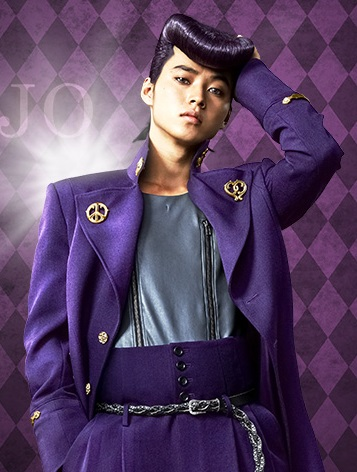 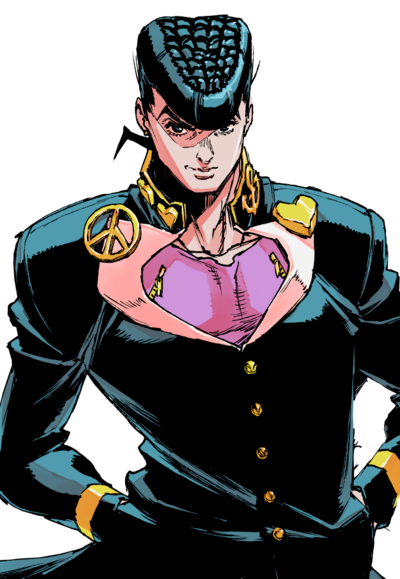 Josuke Higashikata (東方 仗助, Higashikata Jōsuke) is the main protagonist of the fourth part of the JoJo's Bizarre Adventure series, Diamond is Unbreakable, and the fourth JoJo of the series. He is the illegitimate son of Joseph Joestar and Tomoko Higashikata.

Josuke is a biracial (half-Japanese and half-British) high school first-year residing in the town of Morioh. In the year 1999, he meets Jotaro Kujo, who informs him that he is Joseph's illegitimate son. After his grandfather dies, Josuke takes it upon himself to protect his beloved town from malevolent Stand Users.

Josuke is a Stand User that wields Crazy Diamond, a Stand with the power to repair almost anything.

Josuke is a tall, young man of average build. His most prominent feature is his well-maintained pompadour with two small, curved spikes in the back, styled after that of an unknown man who saved his life as a child.[7] His pompadour has a tendency to become spiky with his mood, such as when he is irritated or angry.

Josuke wears a dark, modified Japanese school uniform. His jacket conforms to his body, extending to the middle of his thigh, accompanied by a pair of wide-legged pants. He keeps his jacket unbuttoned and pinned aside, revealing a light undershirt with a short zipper on each side of his chest. He also wears a small stud in each ear.

Josuke wears a number of metallic/golden emblems. On the left side of his collar, he wears a modified anchor and on his right, a row of two small hearts. Pinning his open jacket to his chest on his right is a peace sign (☮), and on the left is a heart (occasionally enclosing a palm, like on Jotaro's hat). He wears a gold band at both wrists over his sleeves (under more elaborate pieces in several illustrations).

Josuke's primary trait is his overall kindness, which is reflected in his Stand, Crazy Diamond, who repairs and heals. When he was a child, a random bystander helped save a feverish Josuke out of kindness,[7] Josuke subconsciously reflected that kindness in him. Even upon the revelation that he was Joseph's bastard son, Josuke had thought first and foremost about the troubles he's caused to the Joestars and disregarded any claim for a heritage, only wanting to reassure his biological father that he was doing fine.[10] Agreeable by nature, Josuke isn't as prone to violence as other JoJos and can even calmly tolerate bullying by upperclassmen[5] or Shigechi's selfishness.[11] Josuke is loyal to his friends and loved ones; risking his life after Koichi is hit by Keicho's Bow,[12] and carrying Okuyasu's body while apparently dead throughout the first part of his battle with Yoshikage Kira.[13] When his grandfather died, Josuke took it upon himself to become the protector of Morioh.[14] Upon meeting someone in not particularly antagonistic circumstances, Josuke will generally be polite and friendly.

Josuke and Okuyasu Nijimura, happy at how much money they can get by cutting off Shigekiyo Yangu

While Josuke does have his fair share of groupies, he deals with them much less dramatically than his father and nephew. He isn't perverted nor relentlessly flirtatious (unlike Joseph), but he doesn't go out of his way to get rid of them (unlike Jotaro). Instead, if the girls near Josuke express interest in him, he is flattered and has shown to get along quite well with his female classmates and admirers.[10] When Jotaro asks Josuke to go hunting, Josuke initially believes he means hunting for girls and says with a blush and smile that he is more of a 'love kind of guy'.[16] He is also humorously noted to be jealous of Yuya Fungami's groupies.[24] However, he seems to be willing to fight them as he threatened to kill Yukako if she tried to do anything to Koichi, with whom she was obsessed.[25] While he does express interest in women, it is not his main priority.

In a quintessential idiosyncrasy, Josuke takes a hyper-sensitive reaction to comments at all disparaging his hairstyle;[10] which Koichi interprets as Josuke reacting to insults towards his savior, although Josuke personally claims he doesn't know the reason for his wrath.[7] After an insult, Josuke automatically enters a blind rage, regardless of the circumstances and interlocutors, and becomes much more rude and violent. Firstly, a swaggering upperclassman to whom Josuke initially defers is punched and stepped on[5] before his nose is permanently deformed. Later, during his fight with Rohan, the latter repeatedly taunts Josuke in an attempt to manipulate Josuke into gazing upon his Stand. As a result, Josuke goes berserk, and after overpowering Rohan, he delivers a beatdown so intense that it landed Rohan in the hospital for a month.[7]

Araki explains that Josuke was truly hurt by the fact that he grew up never knowing his father and that he covered up this pain with the pompadour man who saved him as a kid. According to Araki, Josuke considers that man a hero, somebody he can rely on, and a symbol of his faith in people.[26]