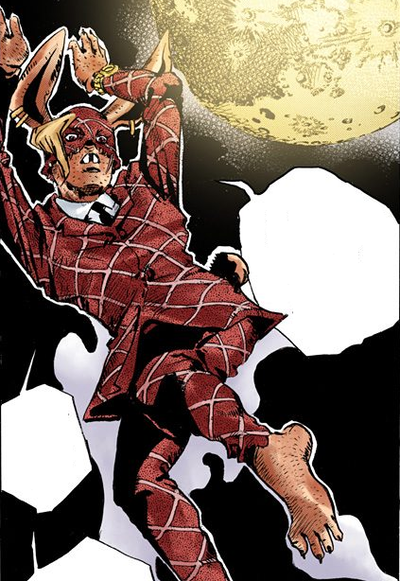 Thus Spoke Kishibe Rohan - Episode 4: The Harvest Moon
“
From now on, something very bitter will happen. And this is... what is pre-determined for the Mochizuki family.
”
—Moon Rabbit

The Moon Rabbit (月の兎, Tsuki no Usagi) is the main antagonist of the one-shot Thus Spoke Kishibe Rohan - Episode 4: The Harvest Moon. He is a supernatural creature who stalks the Mochizuki family and is responsible for many unfortunate events that endanger the family.

The Moon Rabbit resembles a tall, thin man, wearing a grid patterned suit and a rabbit mask, but also has attributes of a hare such as unnaturally clawed fingers, long hare ears and prominent front teeth. It also possesses a wristwatch and earrings on both ears.

The Moon Rabbit appears to be silent when carrying out his plans, but speaks as his attacks are about to happen or when talking about his future plans. Despite this silence, his seems determined to continue the curse on the Mochizuki family.

The Moon Rabbit appears every Harvest Moon to torment the Mochizuki family. He is invisible to any human, which allows him to carry out his plans without anybody noticing.

On the Harvest Moon night, during the family celebration, a series of "accidents" occur. Takeru's RC helicopter crashes into a tree, breaks a branch, and lands in a fishbowl, after which Aki's phone rings and she knocks her father's glasses onto the branch, sending a goldfish into Mitsu's mouth, nearly choking her. However, the same series of mishaps causes Takeru's kiddie pool to pop after Noboru hits it with a pair of hot tongs, making Takeru lose control of the helicopter which falls onto Mitsu to knock the goldfish out of her throat, saving her life. The pool water, however, washes a hornet's nest out into the family garden.

Later that night, when everyone but Aki has fallen asleep, and she talks on the phone with her boyfriend, who tells her he has come to the house to see her. She goes out to meet him, unaware that she is being watched by the Moon Rabbit. She drops her jacket, which lands on the hornet's nest. As she is about to be swarmed and stung, her boyfriend proposes to her. The Moon Rabbit becomes confused when he realizes that she accepted. This saves her from the curse as she is no longer a member of the Mochizuki family in "both mind and body". Since the Moon Rabbit can no longer affect her through the curse, the wasps in her hair fly to the face of a motorcyclist who passed by, causing him to die hitting a nearby gas station. This awakens the entire family, and while Aki is going to tell the good news to her family, the Rabbit moves away, flying towards the moon, promising that he will return next Harvest Moon.[1]